Days of Our Lives Newcomers 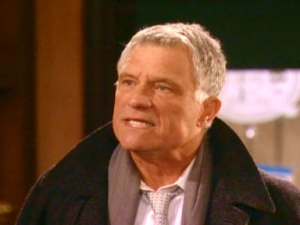 With the recent slew of departures from the cast of Days of Our Lives, many people are wondering when the cuts could end. However, with the losses there have also been some gains. Just this past month has brought a handful of faces into Salem. Although they may not all be around to stay, these smaller roles still play a major part in the day to day adventures of Salemites, keeping things colorful and fresh. Not only that but the past month has seen quite a few soap veterans tumbling through the streets and jails of the troubled town. Many viewers no doubt recognized the face and presence of John Sanderford. He plays Crawford Decker, the angry father of dead sorority girl rapist Ford. Sanderford has been appearing on TV for nearly three decades, including stint on the soaps Ryan’s Hope (1985-1989) and Melrose Place. He has also done his fair share of cop dramas and sitcoms, showing up everywhere from Who’s the Boss to Baywatch to Cold Case. Most recently he has appeared in episodes of Women’s Murder Club and The Riches.

Terrell Tillford has recently begun appearing as Dr. Carrington. We’ve seen him battling with Marlena over John’s treatment and arching his eyebrows in a manner that suggests something more than straightforward medical concern. You may have seen him somewhere before he showed up on Days though. He’s been appearing on TV shows regularly for the past fifteen years. This has included episodes of CSI: NY, Souldfood, Cosby, Shark and Bones. In a soap related note, however, he played David Grant from 1998-2001 on Guiding Light. In addition to being an actor, he also hold an MFA from Rutgers and is talented painter and art collector, putting on shows all around the world.

Another face that will be familiar to soap aficionados is Jay Bontatibus, who is currently playing Rob, one of the mysterious agents of C.B. DiMera. We recently saw him abduct Belle and Claire and take a beating from Shawn. Beneath the artistically applied blood you may have recognized him as Tony Viscardi, one of the bad boys of Genoa City on The Young and the Restless back at the turn of the century. He went on to play the recurring role of Andy Capelli on General Hospital and Port Charles before moving on to small parts on Guiding Light and One Life to Live. A native of Cheshire Connecticut and one-time boxer, Bontatibus has also had roles on Another World, Sabrina the Teenage Witch, CSI:Miami and in the film Lords of Dogtown.

Tony Longo is another tough guy who showed up in Salem recently. In his brief time on the show he played DiMera henchman Carmine. His face should also be familiar to soap fans. He had a recurring role as Ray, the private investigator, on The Young and the Restless from 2002-2006. His list of appearance is impressive and stretches all the way back to the early 1980's with appearance on Laverne and Shirley, ChiPS, 1st & Ten and Fantasy Island. Since then, he's done sitcoms, westerns, courtroom dramas, cop shows, children's shows and appeared in films like How to Lose a Guy in 10 Days, Serving Sara, Road to Redemption and Mullholland Drive. The New Jersey native is well known by casting directors for his versatility work ethic.

A face less familiar to TV viewers, however, would be that of Sean Hankinson who will be portraying Ethan Blaine, an employee of Tony's. Although the New Mexico born actor already has had a short career on stage and appeared in small parts in several films, notably Cougar Club and Fun on Earth, he's more likely to be recognized for his part in the Michael Eisner produced internet serial, Prom Queen, in which he played the role of Ben.