Back off.
I wish Nathan would back off from Melanie. She’s going through enough without the extra complications of an enamoured man. I don’t think he knows remotely what he’s getting himself into. It’d be nice if he had some respect and at least waited for the divorce proceedings to end. What’s the rush?

Suspend disbelief!
Jennifer’s heart was removed and she was put on life support before Daniel and Melanie put humpty dumpty back together again. Fans are livid, wondering how Jennifer could survive. Since she was on a heart and lung machine, her blood would be pumping and her oxygen getting to her vital organs but I believe it only lasts for a few minutes. I think the sequence that was shot was supposed to be only a few minutes, but I’m sure in reality she’d have been gone and Lee wouldn’t have left her on life support, either. I chose to suspend disbelief for this rather than worry about how long it took Daniel to get to the prison from the hospital and then commence surgery, not to mention that a student assisted...

RoboRafe vs Rafe.
RoboRafe was introduced this week. He was created in order to get Rafe out of Sami’s life so that a fantastically jealous and insecure EJ would be the only da-da in his kids’ lives. Oh brother! We learned that RoboRafe’s favourite thing is sex. He ogled Sami’s breasts and other assets and made out with her fervently, while the real Rafe, Sami’s "soulmate," as EJ referred to him, was holed up in a dungeon of Stefano and EJ’s creation. Campy, fun, yet when he has sex with Sami, I’ll be cringing. Some comparisons: RoboRafe has a better sense of humour than Rafe and obviously has better taste in art, but they’re both dunderheads. If you’re interested in dishing on the The EJ vs Rafe debate, it’s still happening in this forum thread. Are some of the posters in denial? Do you, like me, like to keep it real, whether or not you like the characters?

The welcome home/birthday party.
The party was so unorganized. Sami forgot to pick up the cake, Allie wasn’t even seen during the party, and there were no other little kids there. Where were the balloons? Where's the pony? Their cousin Theo was stuck playing solitaire with wimpy Taylor, and Stefano and Kate were not anywhere to be found. I suppose the highlight was Sami and Nicole putting their dislike for each other aside for the sake of the children, while RoboRafe and EJ wandered the globe searching for the cake shop instead of going to Google Maps or using a GPS.

Poor Chloe.
Yeah, I said it. Though part of me wants to light a fire under her arse, the kinder part understands that you can’t just snap your fingers and get out of depression of any sort. It’s a good thing she has Maggie in her life, but when Maggie was off at the hospital, who was looking after Parker? Shouldn’t Philly be notified immediately of her depression so that he can take care of his own kid? Where is he anyway?
I’m not sure where he is but I’m off to the theatre this weekend and an art gallery showing. I hope you’re doing something equally fun. 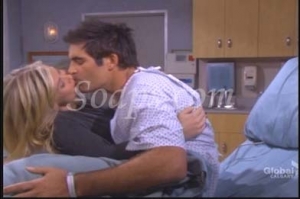 Credit: Give her room to breathe, Nathan! (Soaps.com)

These are the “Days” of my week from January 31-February 4:

The organ harvesting storyline was wrapped up this week, and we’re now ensconced in a doppelganger storyline. Here are some thoughts on what I saw in Salem during the week. Feel free to leave me a comment after you read.

Nu-Taylor arrived in Salem to see Nic Nic. She seems different, but I’ll chalk it up to her being gone for several years! Nicole’s past came rushing back to her and all the pain that went with it when she saw Taylor. This could be a perfect time to bring Brandon back. After watching Taylor’s scenes, I’m curious about what she needs to ‘sort out’. I haven’t taken a shine to her. Not really into the simpering female and all that fake smiling. Not only that, but I can’t see her with EJ. She doesn’t seem his type. Seems I’m not the only one who thinks so. The posters have a thread dedicated to her called, “Is Taylor Annoying?”

God Complex:
Jane, Lee and Ben’s storyline is over, so they’re out. Matt, of SOF’s Matt’s Musings, and I really liked Jane. I’ll miss her. Two things that have been bugging me: Why the hell was the mayor of Salem in the SPD discussing Bo and Hope’s breakout? Why is he even at the jail at all? He’s a mayor, not a lawyer. And how come Hope didn’t realize what was going on before she was told that Lee and Jane were harvesting organs? Bope fans have waited far too long for a Bope reunion and I’m curious about how you feel about it. Please vote in my Are you happy Bope’s back? Poll. I feel for Carly, even though she knew going in that he was the rebound. The break-up scene was touching, though watching Bo snort made me snicker, and I thought that they already broke up! I wouldn’t mind seeing where Carly and Daniel could go. That is, if Danloe is history.

Bo was in rare form at SPD. He got right into Lee’s space. It was sort of sexy the way he pushed his weight around. He made some good points. Though Ben wasn’t aware the organs were not donated intentionally, he obviously did not care either way. As long as they were healthy, and he got paid for them, he didn’t ask too many questions. I wonder if deep down, Ben knew the truth. All three of them need to be put in jail and Ben should never get his license back. Dude has a God Complex!

Days of our Lives Saturday Teaser Poll: A Gift From Elvis