Days of our Lives: Eric Martsolf To Guest Star On Smallville. (Updated.) 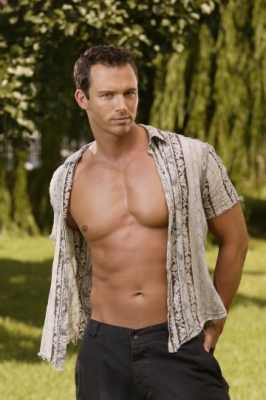 A heroic turn for Martsolf.

Look for Eric to make his appearance as Booster Gold in the episode airing on April 22.

Although he’s been playing the bad side of Brady lately, Eric Martsolf will soon be moving in a very different direction. The multi-talented actor has been cast as Booster Gold, a superhero from the future. The character won’t be appearing in Salem of course. Instead, fans will be able to catch Eric on the CW/Sci-Fi channel series “Smallville.”

No word yet on when the episode will be airing, but it looks like shooting will start right away. Martsolf has been forced to drop out of his appearance in next week’s Soap Cruise: The Fourth Voyage because of the scheduling conflict.

Soaps.com will let you know more about Eric’s new role as soon as we hear more.