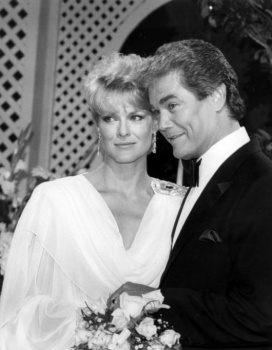 I discovered a post in the Soaps.com message boards about an ex- cast member from Days of Our Lives – Gloria Loring. One of our message board members, ‘glorialoringsings’, who is a self professed fan of Gloria Loring, ( ‘Liz Chandler’ on DAYS from 1980-198) wrote a note about Gloria’s music and invited everyone to take a peek at Gloria’s MySpace Music Blog to hear some of her newer and older sounds. Unfortunately, Gloria (Liz) was well before my Days watching time, so I wasn’t sure who she was. (As most of you know, I started watching Days in 1994, during Marlena’s second possession!) With a little research, I quickly realized who Gloria was. Though I didn’t know her name – I knew her work as a singer!

As I wrote some of this article, I listened to Bo and Hope’s (Peter Reckell and Kristian Alfonso) theme song, “Tonight, I celebrate” on Gloria’s Music MySpace Blog. Gloria’s not only gorgeous but has the loveliest voice! I couldn’t stop at listening to her singing. I then of course had to ‘YouTube’ her scenes on Days. Why do I always have a slight feeling of guilt when watching videos for work?! Perhaps because it’s too much fun? That and I always get a little side tracked. This time after I watched Marlena confront Liz about her affair with Marlena’s husband – Don, I watched Bo and Hope’s first kiss and – if you haven’t seen that, you have to watch it! It’s so sweet. For all you The Young and the Restless lovers, there are a few Y&R ex-cast mates in this episode including Leanna Love, (Barbara Crampton ) in the ‘kiss’ episode! The kiss was so good, Bo gave Hope a tip! I didn’t stop there. I then laughed my pants off watching a few old Days bloopers….I digress. I got so caught up with Gloria’s work that I decided just reading about her wasn’t enough for me. I had to talk to her! I scheduled a call with her for two days later. She was very accommodating. During the call, I went on and on about how wonderful I thought she was, not only for her singing and acting, but for her wonderful charity work. The interview was memorable not only for me but for my mum who is visiting and had an opportunity to say hello to Gloria during the chat. My ma will now have something to talk about at her ladies’ social club when she returns home!

As we spoke, I asked Gloria, “You’ve many fans who remember you from your days on daytime playing Liz Chandler on Days. You’ve been out of daytime for a while. You’re quite a busy person and appear to have so much that you can take pride in, but I wonder…do you miss daytime and would coming back to daytime ever be a consideration for you?

Gloria adored her time in daytime television. She says, “It would be fun to return to daytime and to the show,” but she wonders how they’d write it in. (Always a dilemma!) Gloria says she loved working with her co-stars and thinks it would be fun to return. She did mention that she took a lot away from her time on the show and we pondered how they’d bring back the character with what they’ve got going on in the show now.

I was touched to read about Gloria’s loving efforts with her son (Brennan’s) diabetes and her undying support that raised more than a million dollars in the past for research! I was able to congratulate Gloria about this and about being honored with amongst other awards, the Lifetime Commitment Award from Juvenile Diabetes Research Foundation! I asked if she would care to share how she got into the lecture circuit and being an advocate not only for diabetes but for people living with chronic illnesses and Gloria was very humble with her answer. Gloria nonchalantly says that as a mother, her love for her children prompted her to take action. She feels anyone would have done the same and at the moment. Incidentally, Gloria has written a wonderful and informational book called “Parenting a Child with Diabetes” and you can purchase that here. Gloria lectures as a JDF spokesperson two to three times per week! If you can catch her, I’d recommend going to hear her lecture. Even by speaking with her on the phone I can tell she was meant for this work!

I asked Gloria about her new book which is all about coincidences! She had no title for the book as of yet, even though she’s toying with it ideas. We got into a fantastic conversation regarding coincidences, or what Carl Jung called ‘Synchronicities’, (a string of events that occur essentially at the same time and reveal and underlying pattern). Gloria regaled me with a few stories that she wanted me to share with you. She explained to me that with her fan mail she received an interesting letter sometime ago from a woman who absolutely adored Gloria’s hit song, “Friends and Lovers” (sang with now deceased Carl Anderson, who was exceedingly talented and handsome, by the way). The woman told Gloria that when she was sixteen, her long time boyfriend’s family moved away. The situation forced the two to split up. Live went on as it always does and each married. As time went on and each ended up single and signed up online on a personals site. The woman wound up finding this old boyfriend again and they rekindled their teenage love and have been together ever since! I believe their wedding song was “Friends and Lovers”! How coincidental! Another “synchronicity” came closer to home for Gloria. She explained that her son was in the 1985 Days of our Lives Christmas episode when he was a child, along with several other children who were read the Christmas Story at University Hospital from a wonderfully gifted actor, the now deceased Macdonald Carey (Tom Horton). Two years ago, Gloria’s son received an email from a girl who was also part of the “under five” cast on that day. She spotted his name on a group email and emailed him to explain that she was a part of the cast. Did he remember her? He contacted Gloria to discuss and she remembered the little girl. Since then, a date for a coffee a few days later was arranged and turned into a two year relationship, a proposal and marriage and on May 22, 2008, a baby should make Gloria a grandmother! There’s a coincidence! You just never know, do you!

Gloria and I got into discussing the books she has written. She told me that the idea for writing the "Diabetes Family Cookbook" came from Days, when she and a few other co-stars were swapping recipes! Unfortunately, you can't find that book anywhere as it's out of print, she tells me. She has one copy and purchased it from eBay! If you're the lucky owner of one of these books, hang on to it!

We discussed Gloria's singing. I let her know that adored her beautiful voice - who wouldn't- and she reminisced with me how lovely it was to be able to sing on the show, way back when. Many of you may already know that it was Gloria who sung, "Tonight I celebrate my love", which is Bo and Hope's song! I shared something with her. I'm not much of a television watcher but recently I'd been sitting down to watch TV during the holidays and whenever I turned the TV on, the channel seemed to be tuned to a program called 'The Facts Of Life'. It's a pre-teen show, created back in the 1980's and the theme song is rather catchy. I'd been singing this song throughout the house with such regularity that my loved ones were starting to poke fun at me. Pretty embarrassing, no? It turns out, Gloria actually wrote and sang this song on the sitcom! I found this out pre-interview! Talk about coincidences. Gloria found that comical and said her voice loves singing that song. I almost asked her to sing it. Instead, I asked Gloria, "You’ve done so much, composing, singing, writing, acting, - what’s next for you? She tells me when she's not speaking out on Diabetes and chronic illnesses a few times a week, she's busy with writing her new book, as we discussed above, and is working on her music. If you love her voice, you need to purchase her new album, Playlist. She sings 'The Prayer', which is one of the hits from the album, with son by actor and ex-husband Alan Thicke, gorgeous and talented Robin Thicke. It would appear that the entire family is gifted! Robin has a delicious voice!

I'd like to thank Gloria for taking the time to speak with me and wish her all the best!

Days of our Lives Jewelery and...