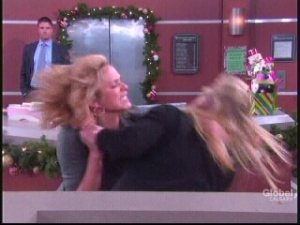 The year comes to an end in Salem.

It’s the holiday season and Christine is off jet-setting to exotic tea parties around the globe which means, sadly, that she didn’t write one of her blogs for this week. Don’t worry though, she will return next week but, until then, you can check out my thoughts on the week over at our sister site, Soap Opera Fan Blog.

“As usual, the holidays were a miserable time for Samantha Jean “Stan” Brady Horton DiMera Hernandez. Sami tried to let Rafe and her children cheer her up but couldn’t be cheered without Johnny and Syd around. She skulked over to Casa DiMera and spied on their Christmas celebrations from the garden. Rafe realized this but said nothing. She then took Allie to the hospital for a check-up. While there, she ran into Nicole and decided to give her a black eye for Christmas. After Sami used the sucker punch that she’d learned from Lucas, Nicole had to think fast and tried to desperately fight her attacker off with all of the stuffed animals she could find in the donation box. But there aren’t enough furries in Toys R’ Us to stop a Sami rampage so the men in white shirts had to be called in to drag her away. Rafe refused to do anything. EJ pressured Nicole into pressing charges but Rafe wouldn’t let her. Indeed, even the prospect of doing such a thing made the new chief threaten to have Nicole arrested. She slouched off. Sami promised to behave and Rafe reminded her that the only reason she’s allowed in human society anymore is because she’s related to half the police force and sleeping with the other half (which means either that Rafe’s math skills are even worse than his detective skills or that Sami hasn’t just been sitting on her badonkadonk all day, she’s really been laying on her back).”