2010 Days of our Lives Year in Review 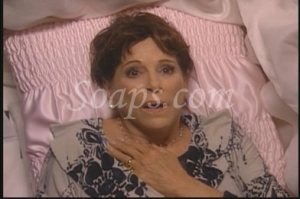 Life in Salem included loads of blackmail, love, and hate within the past year. We also said goodbye to a few characters, including Arianna Hernandez, Mickey Horton, and the beloved Alice Horton. We saw one of Daytime’s most popular power couples, Bo and Hope, break up (again), and we saw Sami almost marry EJ (again). The main ingredient in the storylines of 2010? Scandal, of course!

Goodbye dear Alice Horton:
Frances Reid’s passing this past year was written into the storyline so that Salem said goodbye to the Matriarch of DOOL, Alice Horton. Her funeral on the show brought old characters back to Salem, including Bill Horton, Laura Horton, Jennifer Devereaux (or soon to be Horton again?), and Lucas Horton. Many Alice Horton flashbacks were shown during her tribute and I think DOOL did a good job with this. It’s safe to say that this woman everyone loved will surely be missed.

The return of crazy Vivian Alamain:
One of Days’ most memorable and colorful characters, Vivian Alamain, made her return to Salem this past year. Of course she came to seek revenge on Carly Manning for killing Lawrence. As she tried to warm up to her stolen son, Philip, and his bride-to-be, Melanie, she found out that Melanie was Carly’s long lost daughter. After her plans to poison Melanie on her wedding day failed, Carly ended up accidentally shooting her own daughter! No thanks to Vivian, Carly and Melanie bonded and Vivian moved on to her next victims: her beloved Victor and Philip. I think bringing Vivian back to Days brought some nostalgia and excitement for longtime fans. Of course, Vivian’s return would have been better complete, with her trusty sidekick, Ivan. Here’s hoping he returns in 2011!

I’ve been buried alive!
Days writers seem to take a liking to having their characters buried alive. After Mickey Horton passed away (which came as a bit of a shock to fans, since Mickey hasn’t really been on the show in years), Victor Kiriakis showed interest in Maggie. Vivian didn’t like her husband’s lingering eyes, so she plotted to have Maggie buried alive in a state of the art sarcophagus, complete with a video camera system. Her plan backfired and Brady put Vivian in the coffin herself but the resourceful Vivian ended up putting Maggie in the sarcophagus. Thankfully, the claustrophobic storyline didn’t last. Now that Vivian is free, she’s plotting revenge on her buriers: Brady, Victor, Kate, Philip, and Nicole.

No hope for BOPE?
The pro-feminist type of storyline of the serial muggings left fans thinking that perhaps Princess Gina had manifested herself in Hope again when she started mugging powerful men. This storyline was just plain odd, forced, and seemed to drag on. Add to that, the Celtic feminist symbol and music was overdone! It was later revealed that Hope’s bi-polar-ish personality was simply a side-effect of the sleeping pills she took. Fans were always able to tell the difference between crazy and sane Hope, simply by her hairstyle. We also saw Justin Kiriakis try his luck with Hope, but fail. Carly Manning’s return combined with psycho-Hope landing in jail gave way to the demise of one of DOOL’s greatest power couples, Hope and Bo. Recently BOPE fans are able to see a glimmer of hope (pun intended), now that Bo has defied authority and sprung her out of jail! Here’s hoping that they reunite in 2011. That seems like the inevitable ending anyway!

SAFE versus EJAMI:
Sami went from Rafe to EJ and then back to Rafe this year. When Sami finally got Sydney back after EJ’s arranged kidnapping, her relationship with Rafe ended and she forged one with EJ. They ended up almost getting married until Rafe finally discovered that Sydney’s kidnapping was all orchestrated by EJ. Sami left EJ and then shot him in the head after Kate warned her that he planned to take her kids away. Surprisingly, Rafe stood by Sami and helped her cover up what she did, eventually marrying her. Arianna didn’t agree with Rafe and taped Sami confessing to the shooting. After Arianna died from a hit-and-run, the taped confession got in Nicole’s hands and she gave it to EJ, in exchange for time with Sydney. EJ used this as blackmail to keep Sami, Will, and Rafe away from Johnny and Sydney, or else he’d go to the police. I know EJ is a DiMera and all, but his cold-hearted demeanor toward Sami is a little shocking, especially now that Johnny is sick. The end of 2010 could include the engagement of EJ and Nicole, another one of EJ’s plots to see Sami self-destruct. Though I am a bit tired of Sami bouncing between EJ and Rafe, I am excited to see what awaits her in 2011!

Nicole the journalist and sarcastic Brady.
Apparently in Salem one could be a journalist without any credentials. Nicole got pardoned from jail and got a job as a TV reporter, while she schemed to break up the newly engaged Brady and Arianna. Lucky for Nicole, Arianna ended up going back to jail since psycho-Hope framed her for the mysterious man-muggings. When Arianna died in a fatal hit-and-run, Nicole wormed her way back into Brady’s life. Brady was briefly mean, funny, and sometimes drunk. As 2010 draws to an end, Nicole must make the choice between Brady and marrying EJ just so she can be part of Sydney’s life. Does this mean that drunk-funny Brady is back in 2011? One can only hope!

Stefano’s long lost son.
This storyline is a bit random, as it turns out that Will Horton’s friend, Chad, was actually fathered by Stefano when Madeline was a hooker. Fans hardly see Chad on the show, but I predict this storyline will be explored in 2011.

The old switcheroo!
What year in Salem is complete without some paternity test scandal? Chloe learned that she was pregnant and wasn’t sure if the father was her soon to be husband, Daniel, or her one-night stand with her future son-in-law, Philip. Stephanie learned of Chloe’s affair and schemed to have the paternity results switched so that the baby was Daniel’s, as she feared that Melanie would leave Philip and go straight into the arms of Nathan, should the truth come out. Lucky for Stephanie, her technologically-savvy grandma, Caroline got hold of the hospital records and did the old switcheroo herself. The truth about Parker’s paternity is finally revealed at the end of 2010 at Parker’s Christening. Daniel’s rage toward Philip was a bit on the ironic blasphemous side when he almost bashed Philip's skull in with a large cross. This storyline just dragged on with Chloe endlessly whining about keeping the secret from Daniel, so I’m glad to see it’s finally coming to an end!

Overall, the storylines are improving and even have fans at the edge of their seats. With a few exceptions, 2010 was a good year for DOOL. Stay tuned to see how 2011 is looking for poor-whiny Chloe and Stephanie. Will Melanie turn to Nathan, and will Nathan brainlessly call off his engagement to Stephanie? Will BOPE fans be given a treat and see Bo and Hope back together? Will Sami ever have her kids back and live happily with Rafe? And most importantly, will we ever learn how the tech-savvy Caroline Brady hacked into hospital records?

Happy New Year to you and your loved ones! Cheers to a scandalous Days of Our lives in 2011!