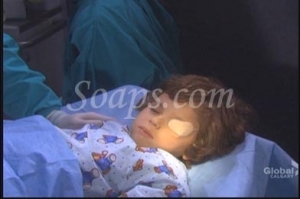 I love these two! (Soaps.com)

Last thoughts of the year so let’s just get right to it so I can get on with my Christmas celebrations. Delicious eggnog awaits me and hopefully you’ll read this with one in hand, too! You might need one…

Writers aren’t in touch with what viewers want.
There are more emotions in the human existence other than angst and sorrow or hatred and rage. I’ve seen Mrs. Hernandez and EJ DiMera experience them in the past. I’d like to see them experience them in the future. Johnny’s storyline, while I’m sure people find compelling, I don’t. It comes too quickly in the aftermath of a thousand and one storylines of babies being kidnapped or becoming sick and dying and it’s difficult to have any feelings toward yet another one. “Yadda yadda yadda, and the kid survived,” is how I describe every one of these storylines. The twins are still doing a great job acting as Johnny but does EJ have two personalities? One minute he feels for Mrs. Hernandez enough to let her near Johnny and the next moment he’s out for her blood. Somebody should just call child protective services and take the kids away from both of these twits.

One positive. I loved seeing Y&R’s Ji Min as Dr. Kim, since I’ve missed him so much over on the CBS soap.

EJole? Bricole? EJaylor?
The more I see EJ and Nicole together, the more I can see she’s the only woman he has been with who can get him to relax and open up without screeching at the top of her lungs or shooting him in the noggin. I think EJole could work well together once again if it’s in the cards but I don’t think it is. Yes, even though he asks for her hand in marriage. Not only that, before he’s with anybody in the romantic sense, he needs to get rid of his vengeance and all thoughts of Mrs. Hernandez. EJole could still be companions, especially if he winds up falling for Nicole’s sister Taylor… Vote on who you think EJ is suited for! The thing is, last time we saw Taylor, she was a good and decent human being and… well… EJ’s a DiMera! So does this mean Bricole will stay together? I keep hearing Nicole profess her love for him but I don’t see him return the sentiment. Still, he did seem jealous when watching Nicole rub EJ’s back at the hospital!

Bope/Barly:
Did Bo and Carly break up or did he just leave her for a while in order to help Hope? It looked like a dumping but the words were never spoken. Carly’s gut wrenching sobs broke my heart. No crocodile tears there. I feel for her and am glad Crystal finally got something to chew on, script-wise. Carly’s grace was inspiring, and understandable after she realized that neither she nor Bo were meant to be. Keeping secrets from your partner is telling. She and Daniel could end up together and do well, considering they’re so much alike.

I was surprised Hope filled the stocking full of oranges just so Lee could beat her with them. I kept thinking Hope should have refused and stood up for herself! I know, she’d have wound up in solitary – oh – but wait. She was already there! The break-out of prison was pretty funny. While Jennifer lied her way into a job at the prison, lockdown came and she couldn’t leave yet Bope was able to escape the prison and make their way to the fishing cabin with ease? Were you skeptical that Lee went down with a food tray to the head? Hope’s not exactly muscular! Must have been the adrenaline. I realize the break-out has everyone questioning whether or not Bope is back together. I think we’ve a way to go before that comes to fruition. At this point, I no longer care either way. Higley has destroyed all feeling I could have for any DOOL couple and once again, they waited far too long to reunite a couple.

SPD gets more ridiculous.
Even Warden Jane can see that the SPD is incompetent, which gave me a chuckle. Though caveman Rafe’s probably their best guy right now, I still think they’re all pathetic.

We learned Jane's a lesbian. I have wondered from time to time if she and Lee were an item. I'm not sure if I've shared those thoughts or not. At any rate, they’re both incredibly great secondary characters and the actors - outstanding. This means that surely they can't be long for the show.

New mum.
Is it just me? I’m really amazed how easily Chloe seems to be leaving Parker with two sitters in the span of a week – right after the baby’s birth! None of my friends have done this. I realize this is just a soap opera but is there something off about it? I’m not sure if it’s healthy or surprisingly odd.

I didn’t see it coming.
Vivian’s takeover of Titan and the mansion was a nice twist. She was absolutely hysterical while telling the family they're to basically kiss her ass.

It’s been a while since I’ve seen anyone rattle Victor. I’m not sure I like the family being so out of control! I don’t recall seeing this in the past and it could make for some fun story fodder.

Vaggie:
Victor and Maggs aren’t over. That’s obvious. I am not sure how she can get over what he did, but if she can, they could once again be sweet together. They’ve sure got the chemistry down.

That’s all I want to say about the show for the year! I'll admit, it gets tiring analyzing every little morsel some weeks, especially when I find the stories lacking and there’s no change from one week to the next with the show or how I feel about it. My hope for the New Year is that Higley starts to listen to the fans more and gives us the stories we want to see that include the entire cast. Not just Mrs. Hernandez and her compadres... And what are your thoughts?!

Merry Christmas, happy holidays, and all the best in 2011! Thanks for reading my column all year and for sharing your always insightful thoughts in the comments!

Days of our Lives Video Promo: You...