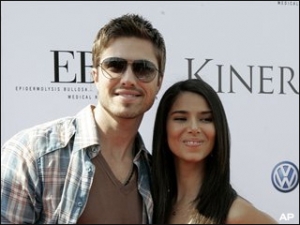 While vacationing at a resort on the island of Vieques, east of mainland Puerto Rico, Eric Winter (ex-Rex DiMera, Days of Our Lives) popped the question to his longtime girlfriend, “Without a Trace” star, Roselyn Sanchez!

Of course the now-bride-to-be said yes and Sanchez’s publicist, Brenda Rodriguez stated in an interview that the couple will be setting a date and location for the nuptials upon their return to Los Angeles in the New Year.

While most of you remember Eric Winter from his three year stint as Rex DiMera on Days of Our Lives, he was also seen in Telenovela, “Wildfire” as R.J. Blake and you can catch Winter later this year “Harold & Kumar Escape from Guantanamo Bay”. It’s sure to be a hilarious sequel to the 2004 comedy, “Harold & Kumar Go To White Castle”.

What a fantastic way to start off the New Year! Soaps.com wishes to send heartfelt congratulations to the happy couple and will update fans as news becomes available.

Days of our Lives Whodunnit?