Days of our Lives Whodunnit? 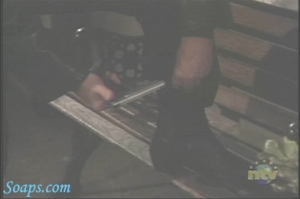 Lucas takes his gunfrom a locked box in a chest of drawers.

Who doesn’t love a whodunit storyline in the soaps? Apparently most of you do, because you’ve been sending me mail for weeks asking me to whip up a Whodunit article for you!

As we all know, the big question around Salem recently has been, “Who shot EJ?” Some of the characters of Salem wish the shooter had finished the job, but EJ’s (James Scott) proving to be stronger than the shooter thought, and he has made a quick recovery. He is already walking with the help of a cane. Those DiMeras are made out of something indestructible; perhaps something similar to what Jason Voorhees (a fictional character in the Friday The 13th series) was made of. At any rate, EJ may have been down, but he’s certainly not out.

Detectives Abe Carver, Roman Brady and Bo Brady from the Salem PD have been doing their utmost to catch the shooter. Let’s take a look at their list of suspects in no particular order.

Let’s look at the facts. Lucas purchased two guns with a bogus name; he lied about his whereabouts the night that EJ wed his ex-wife Sami, who just happens to be the love of his life. He was not at home the entire time, with the twins as he stated, but has admitted he was at the church and saw the wedding take place. He even said he took a shot. Read more here: “I shot him.” Lastly, he got rid of the gun that he used, knowing that if ballistics finds the gun a match to the slugs in EJ’s spine, he’s in it deep. Kate is helping him to leave Salem instead of do time, which is likely what will happen. Not that I think he’s guilty. Still, he’s our main suspect at the moment.

Motive: He loves Sami. He hates EJ. He told Kate he could tell by the look on Sami’s face that fateful night that she didn’t want to marry EJ, and because she said she did it about a million times over, in order to end the vendetta. We all heard it! Lucas didn’t want Sami to suffer through a marriage of convenience and wants Sami to himself. Not to mention – and this is not factual. He has the guiltiest look of them all! He’s still hiding something. I’ll get to what that may be later.

The night of the shooting, Kate goes to Philip for help. She cons him into getting rid of her gun – no questions asked. Philip knows his mother is up to something huge and after he finds powder residue on the gun, he asks Kate if this gun will match up to the slug in EJ’s back. Kate admits to Philip and later to Roman that she got out an accidental shot the night of Sami and EJ’s wedding. She was aiming for Sami! Read more here. Evidence is lLodged in EJ’s spine. Roman finds the slug from her gun and finds a hole in Sami’s dress. He puts two and two together and realizes she shot at Sami. Kate is no longer a suspect as her slug was found, but she’s arrested for attempted murder. She of course gets off, with Philip’s help with five years of probation. Catch up by reading here! It’s payback time my friend. She’s now helping Lucas to run away from the law, after he confesses to shooting EJ.

Motive: She has always hated Sami. She claims to hate EJ as well because he came between her and Lucas’ relationship.

No longer a suspect as far as we can tell, though he did lie about where he was the night of the shooting. He says he was at some auto parts store, but of course nobody can verify this. He was one of the suspects to stash their gun in The Great Gun Stash, but later we found out that the gun he stashed was Roman’s gun. But wait. Roman was never really a suspect. I’ll add that although Roman (Josh Taylor) was never really a suspect, he was at the church the night of the wedding, with a gun, taking aim at EJ. He didn’t shoot but lied about his whereabouts that night when questioned by Abe and Bo. Read a little more here, It’s a practical joke. Bo was always unsure about Roman’s innocence but since Roman’s gun was never fired, the Salem PD let that go pretty quickly.

Motive: He has plenty of motive as far as the DiMera's are concerned. They, (including EJ) took his life from him for years while his family thought he was dead. When he returned with no memory, EJ taunted him and used him as a pawn. Motive enough but again, he's no longer considered to be a suspect.

Marlena went to the church that night with murder on the mind. She wanted to kill EJ in order to avenge John's death. She heard two shots before her gun went off accidentally, due to being startled by the other two shots. She wished she had shot EJ though, and makes no bones about this. Fortunately for her, Roman is on her side. He found that her bullet casing inside the altar, so she was taken off the suspect list. However, Kate interceded when Roman tried to get Marlena off completely for attempted murder charges by handing her the evidence to dispose of. At Kate's insistence and threat, Roman had no choice but to arrest Marlena. Out on bail, Marlena later finds out that Roman came to her rescue again and she's happy to find that the DA changed her attempted murder charge to a misdemeanor for gun possession. Probation for Marlena and now she's no longer a suspect.

Last but not least…

Yes Will. This is my own added speculation - not fact, just my speculation. There could be more suspects that haven't come out of the woodwork yet, and this is one of them. I've suspected for some time that Will could be behind the shooting. Even before Bo and Roman found junk food and casings at some abandoned cabin in this episode: You can't have two men. Why even mention this in the episode unless there is good reason. Then, more recently, Lucas has been talking a lot about doing what it takes to protect his family. I suppose Kate has rubbed off on him a little. In a more recent episode, entitled Brady Black missing person alert, Lucas tells Sami he's off to visit a depressed Will for the holidays. He seems awfully worried when Sami wants to call Will. Could it be because Will's not there? Perhaps. Or perhaps I'm grasping at straws! You be the judge. What are your thoughts concerning EJ's shooting and the list of suspects.

Who do you think did it?!

Love, Peace and Holiday Cheer from...

Ex-Days of Our Lives star, Eric...