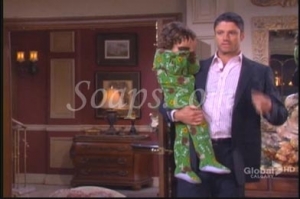 The writing picked up this week, possibly in honour of my birthday. Or not. We made headway with the prison storyline, there was a lot of laughter, a few tears, physical fighting, bartering with God and a semi-incestuous kiss. Let’s get more in depth with all of this soapy goodness.

Cool Hand Hope.
It was as though my hopes for this storyline to get a move on came to being right after I completed my blog last Friday. Hope knocked out poor starving Keisha – with appropriate apologies, made a run for it, got caught, and got a beating from an inmate she put in there, Cassandra. Whew! Very believable and very scary. Even Lee was frightened for Hope’s safety. Thankfully, Hope has some hidden code in the letter she wrote to Bo. We learned that Dr. Ben Walters was in on this organ trade, but it’s not clear in what capacity. To me at least! Because the powers that be want to put him together with sweet Jennifer, I want to assume that he isn’t fully aware of exactly what’s going on in the prison. If he is in on everything, I don’t want Jennifer hurt in the crossfire. Hell, I just want Jennifer with Jack but if that’s not to be, Ben seems – or seemed like a decent guy.

Eating crow.
I no longer question whether or not Brady’s edgy since he expressed that it’s not so bad to be like his grandfather. I just don’t get what that means. All Victor and Brady did this week was drink Victor’s stash of alcohol and discuss ridiculous plans. Meanwhile, Vivian’s got a diagram, tables, charts and knows all of their Achilles heels. The men folk need to step things up a little if they’re going to pull one over on Auntie Vivi. I loved the twist of Vivian telling Stefano about Kate’s part in the sarcophastory and Stefano’s reaction was perfect. He thought it was a good call on Kate’s part to keep Vivian in there, which made me hope that he’d reconsider his and Kate’s break up. I can only hope her move to the Kiriakis mansion will mean Stefano can’t forget her. I have to admit that though I felt really bad for poor Kate, she was so compelling when forced to apologize to Danloe for the cruelty she inflicted upon them. I thought it was a nice tie in with an old storyline and all around had me laughing while feeling for her.

Did you love Kate’s amazing advice to EJ? Probably the best scenes of the week!

I’ll find a way to fix this.
I was proud of Sami for telling Rafe they’ve got to get into the Christmas spirit because of the other kids. It’s about time she realized she has two other kids and can’t lie down and die because EJ has the other two. It was also great to hear her utter words other than the repetitive, "I’ll find a way to fix this." I think Rafe too needs to stop saying, "We’ll get the kids back." We get the picture!

This abuse between Sami and EJ and their children is killing me. I feel as though I could easily slide into the role of a child lying on the floor of a candy store, pounding my fists and yelling, "It’s not fair!" But this is how I felt while watching EJ keep Johnny and Sydney from Scaroline this week. Yes, I know Sami did the same thing to him and it was just as bad. Sort of. I mean he is a DiMera, but I digress. It was painful to watch. My heart broke for Johnny. And I realize EJ has old jealousy and or anger toward Brady, but who the hell cares who Nicole hangs around with? It won’t affect him at all. His concerns are that because Brady’s Sami’s step-brother he’ll taint the kids with Sami’s company. Not if Nicole's visits with Syd are in EJ's presence. EJ's control gets the best of him once again and his humour...he is so deluded actually thinking he’s the good guy! Surely he was joking? I mean he actually thought a new toy would get Johnny to stop thinking about his mother! I’m sorry to say that this storyline is going on well into the Christmas holidays when a predictable health crisis comes up. I feel for Alison Sweeney who is going to have a boatload of tears shed by the time December comes to an end.

Inappropriate to say the least!
The tart who works for Philip really needs to get a handle on things. She could have lost her job hitting on her boss. Who does that?! I suggested to Matt of SOF Matt’s Musings that he should send the gal over to EJ. Matt reminded me that EJ’s not married. I suggested he could pretend. Even if married men are her "specialty," I'm sure she could do something with EJ to improve his mood.

More inappropriateness? Will and Gabi’s kiss. I’ve no desire to go back to the Uncle Max storyline, thanks. Gabi and Will are related now that Safe is married and that means they’re off limits to each other. Not to mention that I think Will’s been hanging with Rafe far too much and is using all of his corny lines on Gabi. Bleh.

"Married men are my specialty."
Translation: I’ve exceedingly low self-esteem and do not think I’m worth more than to be used a few hours for some man’s pleasure who can’t get it together in his own marriage enough to get sex from the wife. How sad.

My beef this week lies with the lack of any news of Arianna’s hit and run storyline. Is this case closed or what? Since Chelsea’s in England, I’m not sure who the culprit is! *wink* It’s bad enough Ari’s poor character was never developed properly and her brother seems to have forgotten all about her death but the poor woman can’t even catch a break after dying. What do you think they should do with this storyline? Vote!

That's all I've got to say about my week in Salem. I'm looking forward to hearing your own thoughts!