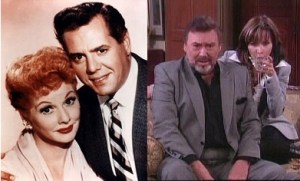 These are the “Days” of my week from November 29-December 3:

This week we saw a morsel of each storyline, which I appreciated, but I do have some issues and don’t mind sharing those along with the highlights.

Kate you’ve some ‘splaining to do!
I’m in mourning. Stefano and Kate are the only couple in Salem I was invested in. I hope this isn’t the end. I can envision so many more great storylines with these two who obviously love each other. Stefano knew who Kate was when he married her, so I think they could overcome this spot of bother and become more like Lucy and Ricky Ricardo.

I would have much preferred to see a flashback to Curtis taking Kate’s kids from her just before she called Sami, rather than be reminded of this well after the fact. I’d forgotten about it so didn’t consider it part of the reason why she warned Sami. Her reasoning would have resonated more.

The bickering between Elvis and Kate was a treat. It’s been too long since we’ve seen their chemistry and it was exciting to see Kate threaten him. It’s been a while since she has been… well…Kate!

Stefano seemed quite proud to have another son but Chadsworth is skeptical, as he should be. Though I’d like to see him move into the manse because it could potentially provide some interesting storylines, I like that at the moment, he’s pushing his new family away.

Loma virus wound up.
Happily, the random Loma virus storyline is finito. At first, it was ridiculous. The actors looked too good (with the exception of the chipped purple nailpolish on Mel’s fingernails) and they were too lucid, considering their temperatures were between 103 and 104. Then – suddenly – further on in the week, there was a drastic change and these two looked dreadful. It was too much of a jump and took me out of the story. Melanie and Carly’s relationship is back on track which was surprisingly poignant but I had no interest in Mel and Nate professing their love for each other. I’m glad they decided to go back to their respective couples, since they’ve more chemistry with them than each other.

Dr. Ben Walters was a lot of fun this week. I enjoyed his unexpected arrogance but didn’t like how predictable it is that he’s getting under Jennifer’s skin. I do question his reaction to Daniel and Carly going into quarantine. Why yell at a fellow doctor’s wife about it? Shouldn’t he have broken it gently to her considering he didn’t know that Chloe was aware of Daniel’s plans?

Stephanie was understandably a wreck this week, but her obsession with Nathan seemed to make her forget her own father has Malaria. Shouldn't she be even a touch worried about him?

Middle Child Syndrome.
Poor Allie. She has never even been on Sami’s radar since birth. There has never been a storyline with her and I fear in a few years they’ll SORAS her and she’ll be a humongous mess. Just like her mother. Oh my head. Can we bring Lucas back already? Maybe Carrie’s return will help Sami clue in.

Sydney didn’t bat an eyelash when Sami snuck into the DiMera garden, which surprisingly doesn’t upset me. Syd obviously doesn’t have any bond with her mother, even after all this time. Sure Nicole is mostly to blame, but Sami has had plenty of time to forge a connection but instead she has been too wrapped up in her flavour of the month. Instead of going behind her husband’s back ten minutes into the marriage, shouldn’t she consider kidnapping her kids and hightailing it out of Salem with a one-way ticket? She needs to fight fire with fire.

I didn’t think it was possible for EJ to sink lower than he has or for me to be surprised by his vengeance. I understand his anger and I understand why he took the kids from Samanther. I even agree with him that Sami will try to use her kids against him but still… How far is he going to take this vendetta? And when is Sami going to wake up and get the dirt on him so that she can get at least shared custody? He’s right. She’s an emotional wreck and really does need Rafe to clean up her messes. She should for all intents and purposes, be angry at Rafe right now for screwing up their agreement with Nicole. But of course she could never be upset with her hero. He can do no wrong in her eyes.

Bricole or Ejole?
I like Nicole with either man but really enjoy the naughtiness EJ and Nicole can get up to together – dating or not. It feels as if Brady’s edge left him when Vivi left the sarcophagus. Even with the facial hair, I’m not feeling the bad boy anymore. I’m enjoying Sydole together even though Nic kidnapped Syd because I know Nicole would never ignore Syd the way Sami has.

Are you kidding me?
Maggie was too soft on Aunt Vivi. I expected and wanted her to scratch Vivi’s eyes out after what she did to her but instead, she was too worried about whether or not Philly, Victor and Brady really left Vivi locked up. Bit of a letdown. And Melanie’s lack of concern for the truth was a lazy way to wrap up this storyline. Storylines seem to always start out great but always fizzle. At least they’re consistent.

Blues.
Vote on whether or not you’d like to see a postpartum depression storyline with Chloe. Somebody please buy her a timer for Christmas!

Can we get this show on the road?
Can we get Jennifer to infiltrate the prison already? Hope’s suspicious of Lee, but the warden has her snowed. She’ll be a bit shocked when she learns sweet Jane’s also behind these prison deaths.

There was another great opportunity lost on the writers when Bozo and Jennifer mentioned Gran trying to break Roman out of jail with the donuts. A flashback would have given me the warm fuzzies I am missing from the show.

That’s all I’ve got. How about yourself? Leave me a comment and have a great weekend.

Join Soaps.com on Twitter @soapoperafan, "like" Soaps.com on Facebook to dish on Days of our Lives, all the other soap operas, Glee, Grey’s Anatomy and Vampire Diaries!

Christie Clark Returns To The Cast...