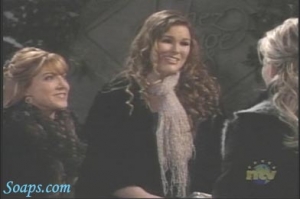 The guest list for Tuesday December 11 2007 for the 10 year Salem High high school reunion included a few faces from the past that I did remember, a few faces I didn’t – only because I was in school when it was taking place and didn’t have time to watch! Some faces are friendly, some not so friendly but fun to watch, nevertheless! Care to take a glimpse down memory lane with me?

Other than Belle, Shawn, Philip and Chloe, we remember six other past characters from the high school days. Shame Mimi (Farah Fath) couldn’t be there but it we did get to see old faces such as…

Cynthia (Veronica Lauren) was notable for her nasty streak, lying and general sleezy nature! Good times! We last saw her scheming in 2002. Recently, Veronica was seen as ‘Celeste Church’ in an episode of Cold Case in 2007 and as ‘Female Patron’ in “Take” in 2007.

Class clown and another cruel classmate, Jason Welles (Aaron Van Wagner) met with Shawn and Kevin at the reunion where he made a jerk of himself, poking fun at Kevin’s (Robert Benvenisti) old glasses and now his lack of glasses – not so funny but he thought so. He then went on to amuse himself by taunting Chloe. I believe it was he who coined the term, “Ghoul Girl” for poor, once friendless Chloe Lane -Wesley. When he found Chloe at the reunion he maliciously said, “I thought you’d be coming as Ghoul Girl?” Aaron must be busy with non-acting projects because he has only been in a video – “Dark Wolf”, as ‘Tom’, in 2003 and in the same year he played an actor in a short movie called “Pool Dreams”.

Kevin Lambert (Robert Benvenisti), was kind of a pawn for nutty Jan Spears (Heather Lauren Olson and then Heather Lindell – both great ‘Jan’s’) when he helped her to play a trick on Chloe. The poor fool didn’t realize until it was too late that Jan’s schemes were not as harmless as he would have hoped. Kevin was one of the classmates who used to date Mimi Lockhart (Brady) (Farah Fath) until he left town to attend university. Now Kevin works in travel and at the reunion, he kindly offered Shawn and Belle a deal on a honeymoon! Robert was the second actor to play the brainy Kevin Lambert but he doesn’t appear to have worked as an actor since – or at least not that I can find. In my search I came across this delicious photo on a site that I try to stay away from during work hours… it is safe for work but difficult not to peruse for hours at a time. Shirtless Robert. Feel free to thank me in the comments section!

Susan Adamson, (Jennifer Gee) was always just a nice girl, friendly with Chloe, perhaps because as a plus size girl, she was teased in school and understood how Chloe was tormented for not being 'beautiful'. Belle befriended her. She admitted to Belle at the reunion that her kindness in high school made a difference and pushed her toward a noble career in therapy! Perhaps she can help Shawn and Belle with their marital issue - that being Philip and Belle's lingering feelings for the sexy war hero. Two gorgeous men and I don't believe in the state of Massachusetts that they allow bigamy. Correct me if I'm wrong!

Penny (Alison McMillan) was not only a part of the high school classmates but she also was around in the college days and played a shy girl. Unfortunately, this is all that I can recall on Penny, but if you've more information on her, I'd be happy to update that here! Penny's now a Lawyer and kicks butt in the courtroom, according to Susan! Since playing Penny on Days, amongst a few other television shows, Alison has played bit parts in television shows such as a desk clerk in "The Deep End Of The Ocean" in 1999 and she played a 'wrong number' in the 2001 movie, "Head Games".

Mr. Malcolm Woods (David Askew) played the senior class advisor and a popular teacher at Salem High 10 years ago. I believe last time we saw him, he was introducing Belle as the class salutatorian and Chloe Lane as class valedictorian. He's now the assistant principal these days (Wouldn’t his title be Vice-Principal?)The actor David Askew has since been seen in 2001's "Shooting LA" as 'The Cook', and "Short on Sugar" which is a short where he played 'Stephan', in 2003.

We gather that the reunion was a good way for the show to bring back Chloe Brady (Nadia Bjorlin), and there were parts of that show that amused me but for unusual reasons. Did you enjoy the reunion? Please let us know in the comments below!

James Reynolds Goes One on One with...

Days of our Lives Holiday...