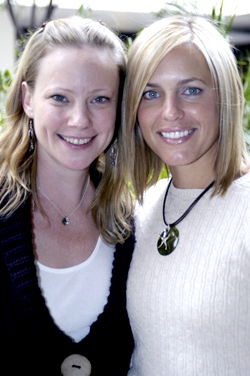 She may not be playing Nicole Walker Kiriakis on Days of Our Lives anymore, but that doesn’t mean Arianne Zucker hasn’t kept her creative fires burning. Teaming up with friend and fellow actress Heidi Mages, the two women created a “funky yet feminine” jewelry line called Lowd Suga’.

I recently met up with Arianne and Heidi at the L.A. eatery, Newsroom Café where I enjoyed a lovely lunch with two very cool, down-to-earth ladies.

Designed to wear at high class events or just to the movies, Lowd Suga’ jewelry is hand-crafted using stones such as mother-of-pearl, quartz, citrine, jade, and antique beads. Their men’s line features pieces made from leather and hemp and the entire collection falls in the price range of $18 – $100.

Making their unique necklaces, bracelets and earrings affordable for the every-person was something the designers had in mind when creating their line. “Who doesn’t like high-end pieces, but who can afford a $2,000 dollar piece of jewelry? The majority of the world is not wealthy. It’s an important thing for us,” Arianne explained.

Meeting through a mutual friend, Zucker and Mages quickly became friends themselves and eventually collaborators. Heidi, who had already been making jewelry and giving her pieces to friends, never thought she’d be a jewelry designer, but when she received high praise for her designs, thought, “Wow! Maybe I’m good at it.”

The women started discussing design and opening their own business and when Arianne put her married name (Lowder) and maiden name (Zucker being the German word for sugar) together, their company name, Lowd Suga’ was born. Once that piece of business was finished, the women took some design classes and started searching for their materials of choice at antique stores, online and in shops in Santa Monica and Venice Beach.

Their differing tastes and styles is what makes Lowd Suga’ such a diverse collection. Offering a wide range of designs, Arianne enjoys making “the harder, rougher, leather sort of jewelry,” while Heidi likes the more delicate designs and the “intricacy of putting pieces together.” Arianne explained her take on design by sharing, “My favorite thing is, how can I do a clasp that is different from anybody else? Mine are more off the wall designs.” She then cleared her throat and in her best pretentious voice jokingly proclaimed, “Kind of Picasso-y.”

As for where they get their ideas, Heidi explained that she receives inspiration from just about everywhere, musing, "You get ideas just looking at people's jewelry a lot of the time," and other times, "Just sitting in a place like this, I'll start noticing the design that they have." Heidi also gets ideas from other artists as well, "I'll look at Tony Bennett books, his art books or Dale Chihuly, who is a glass blower and I'll look at their colors and their shapes that they put together and it'll just give me an idea for colors I wouldn't think go together."

Aside from the business they receive from their online boutique, a site that Arianne created by herself, a good portion of their sales comes from private parties. A popular staple in the women's business, Arianne explained the draw of these events by rhetorically asking, "Who doesn't like to have wine and socialize?" The partners also attribute much of their success to their friends who they say really stepped up and supported their new business. "They're our biggest fans and knowing that they're buying and liking [our jewelry]...it really means a lot to us," Arianne stated.

As for their working relationship, the women collaborate and design in their office together, but apparently it's more like social hour than a job. "We socialize and it's like a knitting class. It really works out well and we have a great time in our office," Arianne beamed.

Heidi followed this thought up, saying, "We feel so blessed that we get to do what we love. It's nice to wake up everyday and LOVE to go to your job."

While these actresses enjoy the creative outlet designing offers in between acting gigs, that doesn't mean acting is all but forgotten, as Arianne has a movie coming out called "The Last Resort." A horror flick about a bachelorette party gone awry in Mexico, Arianne plays a lead character named Jessica who apparently gets turned to the dark side by the end of the film. "Ha, Ha! Shocker! An evil character, who knew? I mean I don't know why anyone thinks I can play evil," she laughed, referring to her ethically challenged character Nicole on Days.

As for Days of Our Lives itself, Arianne doesn't rule out returning for some love in the afternoon. "I love daytime. I love it, I love it," she gushed. "I did want to take a break for a bit, but it's really where I started, it's my home," she reflected, sticking her bottom lip out in a pout. "So, yeah, I would [return]."

But in the meantime, Arianne and Heidi are focused on their jewelry business, which also supports worthwhile charities. A portion of their proceeds go to Children Uniting Nations, a national mentoring program which aims to reach as many children in out-of-home care as possible by offering role-model support, guidance, a sense of community and promoting the importance of an education. They're also in the process of designing a necklace for a specific cause, but as it's still in the works, they're keeping mum about it until it's finished.

While Lowd Suga' designs are currently available in the California boutique stores Alice's Attic and Tricia's Boutique, the women's goal is to eventually have their own store, or two, or as Arianne put it - worldwide!

I'd like to thank Arianne and Heidi for taking the time to chat with me over lunch and wish them every success in both their acting and business ventures.

Soaps.com answers more Days of our...