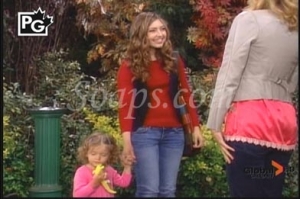 He lost his only friend. (Soaps.com)

Halloween week in Salem.
All we saw was two pumpkins after an off screen visit to the Pumpkin Patch. I longed for a costume party thrown, trick-or-treating or a good adventurous storyline thrown in with a spooky twist. I was hoping to capture some neat screen shots for you to peruse. Instead I posted the other soap opera’s Halloween photos and made up my own DOOL ones. Scaroline was in the spirit this week. She nearly scared the pants off of me. I’d forgotten she can be a formidable woman when pushed. It can’t help that she’s hiding the secret that she has done something illegal. See the spoilers for what that is.

I didn’t mind that Scaroline let Kinsey take Sami’s kid to the Pumpkin Patch. Kinsey works at the pub and knows Sami’s kids as much as Sami does. She’s also smart enough to know Sami never won Mother Of The Year and that Nicole seems to care more for Syd. After all, Sami was too busy rummaging through a dead woman’s things for something so unimportant like taking the kids to the Pumpkin Patch. I think a relationship between Kinsey and Nicole could make for a lot of new scheming. I hope this kicks up Sami’s old schemes in the process.

Crime of sorts…
Kayla’s not the only person in town with a secret. Soaps.com interviewed Peggy McKay and other DOOL stars recently and Peggy previewed that Caroline “committed a crime of sorts.” Many think she’s Ari’s hit and run driver but things aren’t always as they seem. Watch Monday…

Kick it up a notch.
I’d like to see the ‘Chad’s a DiMera’ storyline jumpstarted. We witnessed yet another useless scene between Chad, Stefano and Kate. Is this their way of moving things along? Hopefully Kate sending that birth certificate to Chad will get this mother going.

Ben and Jenn? Bennifer?
I really like Dr. Ben. I think he’s sticking around Salem and I hear he could be a love interest for Jennifer. I’m a big Jack ‘n’ Jenn fan and I’m dismayed that Corday would break up a popular couple who haven’t even been on screen for a few years. Twist the knife deeper.

Salem’s no melting pot.
I wasn’t surprised to learn Arianna was Catholic. It’s almost mandatory for Salemites to be Catholic as if there is no other religion in the world. Have you noticed that? I’ve always thought too that it’s rather white. I’d love to see more diversity even though this is a one horse town.

Will… you… marry… me?
Nathan took the award for the slowest proposal in the history of proposals. Stephanie was so excited to be his betrothed that she fluttered her hands around her face, gasped, covered her mouth but said nothing. You know she’ll say yes and you also know these two are doomed.

Just when you thought it was safe to post.
In our forums, it’s no longer EJami vs Safe. It’s now EJ vs Rafe, which is sad. I don’t like to see viewers/readers arguing when we’re all in this together. From somebody who doesn’t prefer one man over the other, I think the only person at fault for Ari’s death is the person behind the wheel of the car. I wonder if we’ll ever learn who did it. EJ, in his anger for not only losing his only friend he has ever had in the entire world who also just happens to have proof that Sami shot him, told Rafe if Ari died it’d be on his head. Ouch. It was wrong but I understand the anger behind it. Rafe’s response was physical. He never should have shoved EJ, however, I put myself in Rafe’s big flippers and get why he shoved EJ. No matter the issues Rafe was having with Ari, he loves his sister. We’re told to believe that Ari was EJ’s friend but I can’t buy it when the story has shown us she was merely a client. They didn’t pal around. There was no friendship so why the hell was this written in? The writers need to tell the story in its entirety in order for fans to find it enjoyable and believable. There were a few cheesy moments after Ari died but I won’t point any fingers, Rafe. (That ally-cat story? Gah!)

Was he sincere, have an ulterior motive or both?
EJ surprised me by calling Brady to tell him to get to the hospital to say goodbye to Ari. At first I assumed he was being genuine but Sami pointed out that it’s more likely EJ called for Brady with the hopes Ari would open up to Brady about the evidence against Sami. I like how one never really is sure what EJ’s up to! What are your thoughts?

Sarcophafun.
Kate and Nicole were hysterical this week and the sarcophagus scenes were a lot of fun. Duchess Vivian, looking freshly made up and coiffed, taunted Nicky, planting the seed of doubt about Brady’s true intentions. I’d rather see Nic Nic dump Brady if his intentions aren’t honourable with her. She needs to be on top of her game for a while.

Prison scam?
Hope’s storyline is still going a little slower than I’d like but all of these ideas are now forming in my head as to what Jane and Lee are up to. April didn’t get an autopsy and was cremated right away which could mean the prison is in on human trafficking or if the girl really did die perhaps they’re selling her body parts for a little extra pin money. I write a soap opera column in a Toronto newspaper as a side job. I feel so vanilla.

I'll leave you with my favourite line of the week. Bo says to Hope, "Incompetence is not a crime." And he should know.

One of our readers requested a poll. When Taylor Raines returns – who should she be paired up with? Have a great weekend and hang out with me on Twitter @soapoperafan, and Facebook to dish on Days of our Lives, and head over to read SOF Matt's Musings straight away for some laughs!