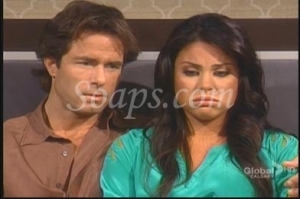 We saw some comical moments this week as usual, which I thank my lucky stars for, and we had two themes. First, nobody was able to find anybody. Philip and Daniel couldn’t find Melanie until she showed up at the wedding looking rather unkempt, Sami couldn’t find Rafe, who was off quitting the Bureau, Carly couldn’t find Bo, who was with Hope instead of at the wedding. These people all have cell phones and are exceedingly conscientious about turning off the ringer when meandering across town. Why have a cell? Beats me. Must be in the “How To Be A Salemite” Handbook. The second theme started near the end of the week with the mums warning the evil Salem men away from their daughters. Carly to Nathan and Sami to EJ.

Carly:
You know what I like about Carly? Not only that she can walk through walls, the way she did when she materialized at Chloe’s apartment but when Bo didn’t show up for the shortest and least romantic wedding I’ve ever seen in soap operas, spineless Carly didn’t go out of her head with worry or jealousy, knowing he was obviously (I guess?) held up at Statesville with his ex-love-of-his-life, Hope. Smart to have Melanie angry with Carly, because I suddenly feel for Carly, who I think I might be siding with over my poor dear Melanie who is disillusioned her family isn’t “The Cosby Show.” With all of the terrible things she has done in the past, I found it odd that she was so self-righteous but then again, she’s never been exposed to a family issue of this magnitude. She’ll come to realize that no family or hubby is perfect. Vote on whether or not Melanie’s anger is justified.

Bope:
I liked Bope for years but sadly, since the writers have chosen to ignore the Bope fans completely and force fans to watch Bore-ly, the Bope ship has sailed for me. Mostly because I can’t stand rebound-Bo (or his fug 1982 wardrobe) anymore. Hope’s perking up a little as is her storyline which is going way too slow for me.

My question: Why are Carly and Bo dressed like it’s 1982 when the other Salemites are wearing the fashions of today? Is the answer to that in the handbook too?

Daniel:
Though half of Salem told Dan The Man a dozen times not to marry Chloe, he did it anyway. Brady and Nicole. The "Gruesome Twosome" as we’ve heard Aunt Vivi refer to them as. Stubborn, blinded by cleavage, in love, or just dense in relationships?

Pat on the back: Henderson interrupted Brady and Melanie after suffering burns to the wrist. Matt of Matt’s DOOL Musings and I agreed, it was the best random interruption ever! We sent flowers to Henderson and some of that Wanchai Ferry Orange Chicken Caroline is hot for.

EJ remains the most interesting character.

The peculiar:
When reading books sometimes it’s necessary to lick one’s finger before using it to grip a page in order to turn it, but EJ sucks his entire finger into his mouth to wet it before turning a page. Was that weird? That didn’t even take the cake. I can’t help but smile at this one...

The eerie:
EJ was a bit of a creeper when he ate his hospital meal while Sami, Rafe and Roman towered over him, spewing hate about the non-wedding and the Sydnapping. I think I saw smoke coming out of his good ear as his wheels were turning. But he kept on eating. Chilling!

The bizarre:
EJ went home with not a mark on his ear or head from being shot in the head at rather close range a week ago which I guess is normal when you live in Salem. Nobody noticed. He wasn’t even stuck on Band-aids. Fail! At least he’s still suffering with dizzy spells, which I hope progresses into a storyline in itself.

The shocking:
EJ said if Sami tried to kill him, he deserved it. What’ll that mean for his plan to get even with Samanther? Force her to marry him in order to keep the shooting a secret? (Please no. It’s been done.) Disappear with the kids? What?!

The Sami Show:
My shoulders are slumping while I write this. I don’t want to go here at all but she asked for it. She had Will put her kids to bed so she could lounge after a long day of unemployment with her fiancé, Agent jobless. She obviously does love Rafe, or that fugly ‘dogs playing poker’ painting would have been burned by now. My new friend nu-Gabi (how cute and spunky is she?!) agreed that they’ve four children to support and a new loft to pay for and no money. Will Rafe work for SPD? Hope’s job will need to be filled but that’s such an obvious place for him. (Which means it’s most likely to happen due to lazy writing.) No way can Sami still have that measly $50,000 John Black gave her.

Ari…
My pal Magicsteacher, reminded me on Twitter that when Grace died, Ari told Rafe she' heard about how awful the Dimeras were and I remembered Sami and Ari used to be friends. Inconsistent writing or did I forget the reason Ari dislikes Sami? Or maybe I’m overlooking the obvious – that Sami’s Sami. You tell me!

With that, I’ll take my leave and bid you all adieu and a lovely weekend!

Have you already "liked" Soaps.com on Facebook? Come visit us while we dish on Days of our Lives, all the other soap operas, Glee, Grey’s Anatomy and Vampire Diaries!