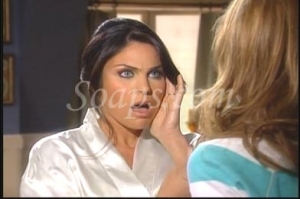 I'm more confused than he is. (Soaps.com)

This week’s DOOL has been brought to you by the word “desperate.” So is this column. What a rollercoaster of a week. Emotional but nothing held my interest. They’re going through the motions and there’s nothing compelling to watch. I did like seeing more of a balance between storylines that I hope is kept up. Still, I feel the need to harp… and boy have I loads of harping to do. And I’m not even PMSing! Don’t say I didn’t warn you.

The slammer.
We saw a brief glance of Hope in the clink but still we’re getting nowhere with this. Not to worry since there’s a big storyline coming up I hear.

Vaggie.
Victor needs to s l o w down. Mickey’s been in the grave less than a year and though I’d like a Vaggie pairing, I fear he’s pushing it.

Ari. Oy.
It’ll be wonderful to get rid of Arianna. Love Lindsay Hartley but Arianna is getting more and more thick by the day. Anyone who trusts a DiMera has issues.

WTF? He’s not gay?
Gus “You couldn’t tempt me with a high colonic,” was written stereotypically gay since day one, so why on earth was he trying to have a sexual relationship with a woman? This is a humongous problem if viewers confuse somebody’s orientation. Maybe he’s in the closet? I’m confused. So is Matt, of Matt’s Musings. We liked gay Gus and the wonderful dynamic between him and Vivian. Plus, I like the way he says SarcophaGUS. We’ve never seen him kiss Vivian or look at her romantically so now we’re left with a boring straight guy who discusses high colonics? What a letdown. I never know who anyone is in Salem anymore. It reminds me of EJ going from evil to good and back every few months. No wonder the show is losing viewers.

Sarcophastory?
Vivian forgot she created a walkie-talkie? I’m desperate for her to be let out. Now. Please. I’m not even sure how I feel about Nicole and Brady at this point. Is he still using her or isn’t he? Oy. Poor Nic Nic.

Lexi, Abe & Theo.
Why is this family of vets so underused? Instead we get Stephanie and Chloe’s insecurity storylines and the Sami show. To further complain, what’s with all of the casting calls? The cast is too big as it is. Will there even be airtime dedicated to those not used in the Sami Show?

Desperate to end this storyline.
There’s a nice balance between mother hen and the daughter with no self-respect now that Kayla’s back and I’m starting to pay attention. I’m not sure how this is going to play out considering this isn’t the first time Steph has had issues with men. She needs Marlena’s therapy. And a new hairstyle for those lovely locks that just hang loose and listless all the time.

Fiasco wedding. Fiasco storyline.
Chloe didn’t get to have any family at her wedding to Daniel which means we miss out on Nancy, who would be a riot to have on the show especially with all that her daughter’s going through. What a crying shame.

Daniel blowing up at Nathan because he doesn’t like Chloe was out of control and rude. It’s not as though he and Nathan are BFFs. What a strange over-reaction. Salem law says everyone has to like Chloe?

Like father like daughter. Melanie was over the top being that hurt and disillusioned by Nathan keeping Chloe’s secret. Why shoot the messenger? And was Nathan really being spineless not telling her? It’s not really Nathan’s place to say anything not to mention that they're not even friends. The fact that her anger was so exaggerated tells me she’s either in love with Nathan or just a drama queen! (Because with DOOL, you never know what a character really feels. They don’t even know.) I understand that she’s upset about the news as she should be but slapping a pregnant woman didn’t sit well with me either. My Facebook pal Linda D said, "Slapping a pregnant woman?! Really? If a man did that he'd be hauled off to jail. I'm just sayin'... It's not like Melanie has been a saint going between Phillip and Nathan, and still mooning over Nate." Exactly! It’s enough having an argument with a pregnant woman and worrying about what it does to the baby but to hit her? Melanie should have calmed down before questioning Chloe. Maybe then desperate Chloe would have kept quiet about the other "spineless" one, Carly knowing about her secret.

What’s with Daniel’s constant chirping to everyone within hearing distance that he needed to go to the apartment to get the license and bring it to the wedding? This is 2010, surfer dude. Text message Chloe to bring it with her. It’s not embarrassing. It’s a non-issue and wasted precious screen time.

Chate? Bleh!
Why is Chad always harping on grandma Kate, thinking she wants (what she likely sees as) his pre-pubescent body? Seriously it was gross and she’s not that... desperate. There’s that word again! There’s too much of an age difference. When he and Nicole were discussing the exact same thing (coughrepeatcough) it was funny since they’re closer in age. Why didn’t he consider that Kate must be trying to help her old friend’s son now that he’s practically an orphan? Not that it’s the reason for Kate’s interest but is he really that narcissistic?

Loads of questions and no answers. Either I need a drink or a long weekend. I’ll take both and see you back here next Friday for more dish! Do I dare ask your own thoughts on DOOL this week?

Join Soaps.com on Twitter @soapoperafan to dish on Days of our Lives, all the other soap operas, Glee, Grey’s Anatomy and Vampire Diaries!

Days of our Lives Will Be Pre-Empted...