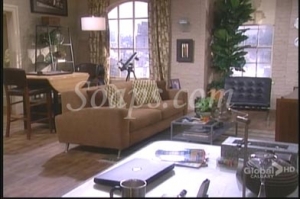 A moment of silence. (Soaps.com)

These are the “Days” of my week for September 27-October 1:

The week still revolved around Sami, EJ and Rafe. I’m worn-out from the angst surrounding this trio which has turned into something really sick that holds no entertainment value. I haven’t been able to cheer Sami on with either man. We did get a few great mausoleum (the new hot spot in Salem) scenes, however, which broke up the monotony, and we learned poor Pookie died of heartbreak and that somebody buried her in the pet cemetery.

EJ’s fake amnesia.
Sami and EJ’s wedding didn’t end up with the two being married. The judge left after Rafe interrupted the service so it’s ridiculous for fans to be expected to believe that EJ would remember something that didn’t happen unless he hallucinated it in his coma! That would have worked for me but this doesn’t. EJ’s not this stupid and neither is Sami, considering she’s the queen of faking amnesia.

Corday and Higley are obviously unaware that they’re writing this soap opera into the ground. Check out his thoughts on how long the soap will be around for in Ken Corday’s interview with Soaps.com. It’s an eye-opener. Plus, there are all sorts of scrumptious spoilers.

Rafe:
Thankfully, the man has enough common sense to know EJ’s lying about his amnesia, but lounging around the hospital smirking and waiting for his fiancée to pretend she’s married to EJ is ludicrous. Shouldn’t he be working? You’d never catch Lucas doing that for a minute. He’d have dragged Sami’s arse out of there pronto. I miss that about Lucas. I’ll give Rafe a gold star this week for finding a home for his intended, and her brood.

Sami:
Instead of hanging around the hospital worrying about what’s going to happen to the man who convinced her that her child was dead, I’d rather have seen Sami seeking a job and a home for her littler. She’s lucky to have Rafe to find them as Matt of Matt’s DOOL Musings referred to as “an old locker room” (loft) to live in. One may I add that Sami acts like she has never seen when she has been there in the past when it belonged to Isabella or John or Brady or Rex or… I digress. No mother, not even Sami in her right mind would help save the life of a man who lied to her about her child being dead. (At least not for a few more years!!) It makes it difficult to cheer on Sami when she’s written as an imbecile, or a rug to walk all over. That’s not her. Setting an example for Sami’s children should be more important to her than helping the man who tried to destroy her life numerous times. And how rude of Sami to dump Johnny on Nurse Maxine, in order to whine to her beau? A nurse is not a babysitter!

Did I miss something?
Is the recording of EJ confessing to kidnapping his kid and faking her death inadmissible in court? He's going to get away with all that he did isn't he?

Job for Stefano.
If Stefano ever wanted to change which side of the law he was on he would make a better detective than anybody at the SPD with all his contacts!

EJ
EJ is deeply hurt because Sami chose Rafe over him. He shows this by behaving like an over sized penis with ears. I understand his hurt but he should not have been remotely surprised. He should have expected this was coming sooner or later. I think we’re seeing dark EJ return with his comment that he’s done with Samanther and he won’t let anybody have control over him.

Shut up!
Whenever Philip and Chloe meet, it never fails. They always discuss their sex romp. If they want to move on, why do they keep taking the time to mention their dirty secret? I can’t wait for this storyline to wrap up and I’ve a funny feeling Melanie might be the one who switched the results.

Tales From The Crypt.
Brady and Vivian are still entertaining me, but I’m always startled when Brady calls Vivi ‘honey’ or ‘sweetie’ in anger. Shouldn’t those words be reserved for sarcasm said to an ex-lover? It’s more biting that way.

I dug how Nicole showed up at the Kiriakis mansion and helped herself to a drink while Henderson looked for Brady. These are the Nicki moments I live for. And how hot was the Bricole sarcophagus sex scene? Poor Vivi couldn't stop gagging but one would think she’d be glad for some entertainment. She hasn’t complained once of back pain or claustrophobia. What a trooper. *wink*

Product Placement
Caroline gushed over a product placement this week, making me cringe. It was so over the top and hilarious. A welcome break from the monotony. I mean the Safe scenes.

Sabotage?
How adorably terrible was it that Victor has been putting the kibosh on Philly and Mel’s attempts to purchase a house, just to have an excuse to visit Maggie under the guise of visiting Philly? Expensive stalking but seems to be working its charm. Maggie seems to be thawing some.

Where is Hope?
Are we going to get a storyline out of this incarceration or is Hope on her way out? In this day, it's hard to trust that DOOL isn't pushing yet another vet out, especially since this is how it happened with Lucas. What are your thoughts on what should become of Hope? Vote in my 'What About Hope' poll!