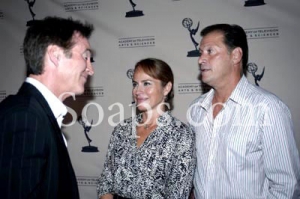 As Soaps.com reported in June,a new book,
Days of our Lives Novel: Salem’s Secrets, Scandals and Lies is on the way. Soaps.com spoke with the author, Sheri Anderson, about the series of novels coming out in November.

Sherri Anderson previewed the series by saying, “It’s a series of novels actually. There’s three coming out, the first one comes out in November, which is A Secret in Salem. It’s really a series: Salem’s Secrets, Scandals and Lies. I used to be head writer of the show off and on for about nine years. I started as assistant and worked up to heard writer, so I co created a lot of the characters who are on the show now: Bo and Hope, Patch and Kayla, Shane and Kim, Victor and Vivian. I found it was a lot of fun because I didn’t have the restrictions I had writing television. We have no budgetary restrictions, we don’t have to worry about character guarantees and sets and you can suddenly have a six million dollar yacht with a party for 400 people with a lot of celebrities on it. It’s fun. It’s a really different writing experience for me, but it’s exciting and as I wrote the book, and as I said there are a number of characters from Days of our Lives who aren’t on the show right now, most especially John and Marlena. A number of different character filter in and out: Abby, Jack and Jennifer. It’s really lovely to be able to write them and then keep it open that if they want to be back on the show they can be. The story kind of compliments it way, way, way outside because this takes place in Monte Carlo and Switzerland, so that’s a lot of fun to write and create some new characters who filter in the next book.”

When Soaps.com asked if Anderson still followed the show, she told us, “I do follow it. I don’t follow it as much. It’s always kind of tough when you’ve been head writer of a show and you see it and go, ‘Wait a minute. What happened to that character? What’s going on there?’ I’m mostly a manager and Bryan Datillo is one of my clients and Leann Hunley is one of my clients. I still follow it because there are a lot of people I know and love. It’s hard to turn away from it.” And what does she think of what’s happening now with the characters? “I never like to comment on that because I would write them differently and every writer probably would come in and do that. My niche was really high romance. If you do get a chance to read the books you’ll see there’s so much of that on there. That’s really more where I go. A lot of the characters, I don’t know. It’s a different era. It’s a totally different era. It’s very tough to be a writer commenting on other writer’s work, but I so respect what they’re doing.”

Read our previous article,
Days of our Lives Novel: Salem’s Secrets, Scandals and Lies for a sneak peek and to vote on our poll and let us know if you’ll be reading the book when it comes out. Feel free to find us on Twitter @soapoperafan, and Facebook. Come tweet and Facebook with us about Days of our Lives and all the other soap operas!