I felt for Arianna this week. Ari told Rafe Sami too was to blame for her issues with EJ and Sami bit off Ari’s head and Rafe told Ari to stay out of it. Is it really any wonder that Ari’s loyalties don’t lie with the Fed? Is the fed really that thick that he wants to be with a woman who can’t even take partial responsibility for her part in anything that goes wrong?

Before EJ was shot his brooding and whining made me sneer. "Good," I thought to myself. ‘He put this all upon himself and boo freaking hoo.’ I didn’t feel the least bit sorry for him. I loved the tough love scenes Nicole had with him and it had occurred to me she knows him better than most. I don’t know if he heard her or not. His answer was to consider offing himself so selfishly. He deserves jail or something nasty but Sami went too far! I like watching this freak in action and hope he doesn’t have too much downtime. But what about Sami? Take the poll! What do you think should happen to Sami?

Sarcophagus.
It's obvious to me that Brady's going to get Vivi in there and Victor and Maggie will get together. But what'll happen to Gus?

New and unimproved Caroline.
Caroline was really getting on Will’s case about trusting Stefano but Will’s not a stupid child, and he has heard and seen a lot of reprehensible things Stefano did to the Brady family so I don’t really buy that he’d tell his grandma that she has no proof of Stefano’s wrongdoings. I prefer if Caroline stopped acting like Sami - so over the top and bitter. I’d rather think it more entertaining to see her play it in a cold disjointed type of voice where she’s dead serious that Will shouldn’t trust Stefano and Will actually is a little nervous! I like her strong but this listening into Will’s conversations and acting like a spinner isn’t working for me.

Nicole’s kind of a caricature of herself at this point.
I’ve said this before of Stefano in the past. First of all, I was appalled by Nicole’s choice in gift to her buxom yet classy looking friend Chloe. That was a dress perhaps a Pussy Cat Doll would wear, not our Chloe. I found it strange to see Nicole crying on Daniel’s shoulder on the pier. It was awkward and kind of sadly funny that he was trying to get away from her at every turn. I loved that Daniel was so straight with her when she was wondering why these bad things always happen to her. She needs a friend who can be brutally honest with her though I’m not sure if Daniel’s that confidante.

The big switch.
What if the person who switched the test results was Maggie or Kayla? Maggie wants Melanie’s happiness though this isn’t really her style. Mother hen Kayla wants Stephanie’s happiness and doesn’t want her to end up with Philly. Not that she would but a mum can’t take any chances! What do you think?!

What the…
At the beach, after Ciara wondered if Carly and Bo wanted Hope out of the way, Carly offered to leave town for Bo if he needed her to. Leave town? Is she out of her mind? If Ciara has to come first, Carly could move out for a while but moving away from Melanie and her friends and job at the hospital is ridiculous. Why do they write her this way?

It’s true. Getting it all out does feel cathartic. Now it’s your turn! Please feel free to leave me a message about your thoughts on what happened this week as always. Matt posted his on Matty's DOOL Thoughts on Soap Opera Fan!

Did you know? Soaps.com is on Twitter @soapoperafan, and "Like us" on Soaps.com’s Official Facebook Page where we serve up soap news daily, including dishing on DOOL! 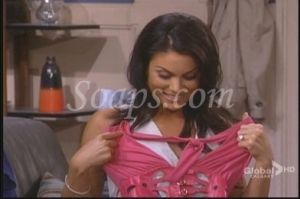 These are the “DAYS” of my week for August 30-September 3:

The shocking twist this week where Sami shot EJ in the noggin wasn’t a shock at all to anybody because over a month before the spoiler came out to us, fans were posting about it in the forums. It was a letdown. I hoped it was conjecture but Corday slipped it into the fall sweeps early, possibly to ensure more viewers tuned in. I prefer when some teasers are more of a shock to all. It’s the not knowing that keeps me watching. Anyway, on with it…

Corday’s promises:
Corday promised a smart and strong Sami on the way but shooting EJ in the head wasn’t smart, nor was it strong. It was careless, illegal and morally wrong for the little Catholic to do! I call her a desperate stupid, insipid woman.

Many fans call Corday sick to mess around with their fans by having Sami flip flop between two men. This doesn’t win Sami any fans and I’m surprised the Ejami and Safe fans haven’t left for another show who respects their fans more. Are fans to gather that Sami wanted Rafe all along and was merely with EJ because she couldn’t have the man she really wanted? I’m not seeing that. I’m seeing a desperate woman who can’t be without a man. A woman who needs a man to take care of her. I see somebody who has no conscience who shot a man in the head, got rid of the evidence and got into bed with another man for some heavy panting and sex. There’s a bit of Eww factor there. It’s been a few days since Sami dumped EJ the Sydnapper and already she accepted Rafe’s marriage proposal. She told Rafe he was her dream come true two days after she thought EJ was. She lied to Rafe twice already even before they were engaged and we’re supposed to swoon over this couple? Is this the way Corday likes to portray his strong and smart women? I’m not amused. I’m also not amused that EJ had a loaded gun in an unlocked drawer in a room where the children play, but I do find it amusing that Sami ran with a gun to the pier and nobody noticed. Or did they?

Days of our Lives Saturday Teaser Poll: Did Somebody See Sami? 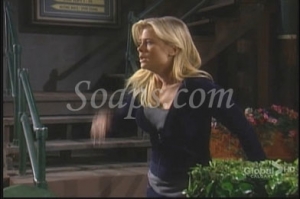