The great paternity switch/
What could be more charming to receive a baby gift on a mother-to-be’s birthday? Perhaps a birthday gift for her?. She received a lovely diamond tennis bracelet, box seat tickets to see the opera, a baby cup and a teething ring. Save the baby gifts for the baby showers or the hospital visits. The mother-to-be is still a woman. I felt Daniel was overextending himself in the gift department. Surely the princess didn’t need all of that? Funniest part of the week? Chloe looked svelte in her robe when Carly came to the door. She changed clothing in her room and returned to show off this massive five month baby bump. They seriously wrote this? I didn’t imagine this in my worst nightmare? I’m so embarrassed.

Let’s get on with it shall we? Who switched the paternity tests? Here’s our list of suspects.

Melanie Overheard something and doesn’t want hers or her dad’s marriage ruined. Maybe she was on the website pondering the job. She did turn it down right after.
Philly Worried Mel will leave him for Nathan. Maybe he really did have several meetings that day that had nothing to do with the paternity switch.
Daniel Overheard Carly and Chloe and doesn’t want to ruin his or his daughter’s marriage. Or did he simply pay a fortune for those opera tickets? That may have been why he was telling himself to just do it for Chloe’s happiness. What a drip.
Chloe She wants it to be Daniel’s. She’s selfish and self-serving. I don’t know why else she’d be on that website and truly don’t think she has the smarts to switch her hairdo let alone paternity results.
Carly Seen hovering over the computer at St. Mary’s saying ‘It’s done.’ Seems fishy. She was nervous when she went to tell Chloe about the results. She’s afraid to lose Daniel’s friendship and her daughter’s respect. Could she know the man that Chloe cheated with was ‘Philly K’ as Matt from Matt’s Musings refers to him as? Was she crying in Daniel’s arms in relief or was she beside herself for pulling a Sami?
Nathan I’m not sure why he’d care. Maybe that makes him more suspect because I’m not suspecting him!
Stephanie As insecure as they come and trying to save her man but then why would she act as though she didn’t do it when she and Ian found the results and when would she have even had time to do it? She’s no hacker, so she’s not much of a suspect.
Ian Could have done it while Steph ran off crying to the pier though I can’t see why. Seems he’d rather get Nathan out of the way so he can be with Steph. I don’t see him as a suspect.

Or as Stephanie said, maybe the paternity switcher is somebody they don’t know about. All of them have motivation. More than one could have attempted it. Could it be Vivian, doing it to get to Carly? Or perhaps Gus, or Victor, who doesn’t want Chloe associated with his son once more? Are there other suspects that we’re not aware of? Far-fetched but could it be Father Matt? I’d love to know your thoughts!

That’s all the ranting this girl can stand. I’ll trust you’ll have a happy weekend and we’ll meet back here next Friday. I’ll even try to find something more positive to rave about.

I'm off for a weekend with family. What are your plans this weekend? Catch me later on Twitter @soapoperafan! 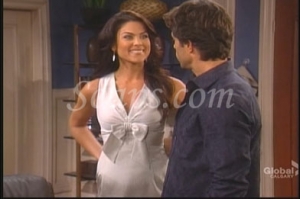 In summary.
The big reveal did nothing for me. Payoff should never take this long. I stopped caring ages ago. Plus, Rafe repeated the same dialogue all week. It was him, Sami. Him. EJ. EJ did it. It was him who kidnapped Sydney. He did it. Stephanie stuck even more fingers in her mouth to show how coy and sexy she is while Brady, so weak, turned to alcohol just because he saw his gal pal’s humongous bank account and assumed she was up to no good. Without a good reason why he has turned into Mr. Bad Guy, what started out as fun is now getting ridiculous without that motivation required on his part to make me feel for him. It’s already becoming a joke and starting to get to me. He took a drink because he didn’t like that Victor was right about something. Loser. Note to the DOOL writers. When you are attempting to write a good boy gone bad, using booze is a start but you quickly have to give him more ‘bad boy’ duties.

Who is this version of my Vivi?
Vivian Alamain is not the surefooted confident Vivi I once knew. Gus is confused by her actions, Victor noticed her obvious reason for purchasing the sarcophagus that she was so thrilled Maggie liked. Why watch if we can figure everything out so easily? Maybe they’ll have Victor bury Vivi alive instead, providing an obvious twist.

Die Sydnapper Storyline. Die.
The Sydnapper debacle is about to become a distant horrible memory, ala Tinda Lau and Touch The Sky storylines. Rafe’s dialogue recycled itself for two days. Sami learned the truth and used used a quiet dignified anger in a controlled way until she had to match EJ’s bellowing if only to be heard when she blasted him for his machinations. The CD won’t be admissible in court so Sami or Bo or somebody else will have to shoot EJ and send him to hospital once again. You know that’s how they’ll write it because that’s how Dena the recycler rolls. Let’s have a poll. Who has ruined DOOL more? I don’t care about the fallout from this. My dream is to fast forward to something completely different with a new head writer who doesn’t like love triangles or baby storylines.

Bye Barley.
Beauregard had a dream about Hope sitting on his bed begging him to help her. All I could think about was a scene of Sami sitting on EJ’s bed during one of his dreams while he was with Nicole. I can see Carly was right. Bo’s got a thing for damsels in distress. She has every right to fear for her relationship. But I could care less because this character is a drip. 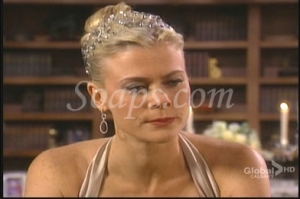