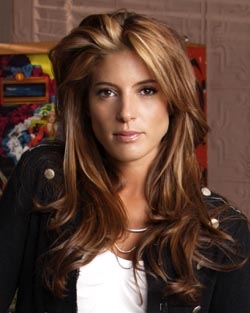 Even though she didn’t win season 4 of I Wanna Be A Soap Star, Jimena Hoyos took it all in stride. With a self-deprecating attitude and sense of humor, the Colombian actress came to terms with the fact that even though she didn’t take away the coveted 13-week contract on Days of Our Lives, she will take with her an extremely valuable and positive experience. After the taping of the live finale, I had the chance to talk to Jimena about her time on Soap Star.

When I asked her how she felt after coming in as runner up to Ashlee Holland, Jimena deadpanned, “It sucks; I lost. Are you kidding me?” She then laughed and said, “No, it was amazing. I think this is a gift and an opportunity. It was an amazing idea for the producers to have this show. Even if you’re a struggling actor or you’re not, it’s the best rehearsal and the best opportunity.”

She may have a positive attitude now, but it didn’t always appear that way on the show. Even Jimena herself realized how negative she came across, as when it came time for her to watch Soap Star, she told me, “At the beginning I watched four episodes and then I saw myself complain so much and whine so much, that I couldn’t even take it. But then I recorded it and would watch it afterwards.”

While she may not have won, Jimena shared that, "It was such an amazing training and I think the one thing that I learned the most is that it is worth it to dig in and to go as deep as you can and touch those spots that you don't really want to go back to."

It also appears that she is walking away with an amazing friendship as well. As fans of the show know, a bond developed between Jimena and Ashlee and from what I witnessed during the taping, it was clearly not just for the cameras, as it appeared Ashlee helped calm Jimena's nerves by making her laugh during the commercial breaks. And even though they live on opposite coasts, Jimena in Miami and Ashlee in L.A., Jimena shared, "I call her every single day. She took care of me the whole competition."

So even though Jimena lost, there are no hard feelings. When I asked if she would be watching her friend on Days of Our Lives, Jimena responded, "No!" She laughed again and said, "Of course! She deserved it. She's a very strong actress, very talented, very smart woman."

We at Soaps.com have no doubt that this strong, talented, smart woman herself will do just fine in her career as well and that we will be seeing her pop up before too long.