Ashlee Holland is Crowned the Next Soap Star (Update) 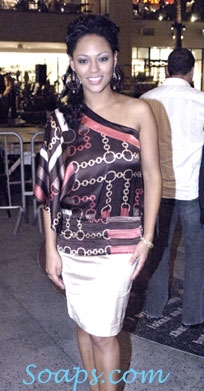 Ashlee(Crystal the psychic) courtesy of SOAPnet

Having a second row seat, I was upfront and center as the entire season was recapped and judges Michael Bruno, Mary Beth Evans and Hogan Sheffer shared their thoughts on the two final contestants, Jimena Hoyos and Ashlee Holland before the winner of I Wanna Be A Soap Star 4 was announced.

After dragging out the reveal, as he so famously did week after week on the show, Cameron Mathison announced that Ashlee Holland would receive the 13-week contract on Days of Our Lives.

As 120,000 fans called in to vote (which counted for 50% of the total vote), Cameron told the audience it was the closest competition in the show’s history. And for good reason, as the final two Wannabes were smart, talented, beautiful women who both the fans and judges could easily see assimilating in Salem. But, as there can be only one, Ashlee came out the victor and after she caught her breath, she graciously took the time to talk with me and the other members of the press about her experience.

So how will she fit into Days of Our Lives? While she didn’t know herself, she was told from another journalist that her character would be interacting with none other than Marlena Evans, played by Deidre Hall. Not a bad way to start her soap career!

Originally scheduled to start taping just four days after her win, Ashlee couldn’t have been more appreciative and excited to get started, but she did have one concern, “I hope to God I get a script before then!” (We were later told that her first day would be pushed back to November 30th so she could be incorporated into a new, exciting storyline.)

When Cameron announced her name, Ashlee admitted she was a little dumbstruck. As she explained, “I didn’t understand. It didn’t compute. I thought ‘Did he say you were killed off or did he say you won? What did he say?!'”

As the reality of her winning sunk in, the other members of Soap Star’s cast came up on stage to congratulate Ashlee, along with several actors from Days who were in attendance, including James Reynolds (Abe), Leann Hunley (Anna), Martha Madison (Belle), Brandon Beemer (Shawn), Nadia Bjorlin (Chloe), Blake Berris (Nick), Darin Brooks (Max), Rachel Melvin (Chelsea) and Shelley Hennig (Stephanie).

While Holland isn't an avid viewer of the show, she has been trying to catch up with the goings on in Salem in anticipation of her win. As she admitted, "My boyfriend Maurice has been TiVoing everything, making me watch and learning who everybody is [so I] have an idea."

One of those people she already knows, as Mary Beth Evans (Kayla) critiqued her performances every week. While some may have crumbled at the thought of being criticized, Ashlee flourished from it. "I learned so much from Mary Beth. Her words meant everything to me because she's an actress, so she knows the nitty gritty," Ashlee explained.

As for the other judges, she had nothing but positive words for them as well, "Michael and Hogan are amazing and I literally changed my whole view and approach so I was excited about the criticism."

For this former stay at home mom and occasional commercial actress, being on Soap Star was her first real foray into television, one that was a little tough to watch after the fact. "It was God awful to watch all of it. There were days and nights I did not sleep or eat. It was awful! I hated it," Ashlee winced.

She better get used to it though as she will be soon be seen on the small screen on a regular basis. Not quite knowing what to expect, Ashlee shared that she would love to work with James Reynolds, her former Soap Star guest star, because, "I loved playing his daughter with the dying daddy scene. He really helped me out a lot."

It appears Reynolds feels the same about Ashlee, as he commented, "Not only physically is she very attractive, but she also has this kind of confident quality that's going to add to the texture of the show. I'm really pleased to see her come."

Days of Our Lives casting director, Marnie Saitta also weighed in on Ashlee joining the cast, stating, "I look forward to working with Ashlee. I believe she will bring a hunger and a passion to her work at Days of Our Lives. She will be a welcome addition to our talented cast, as it is always inspiring to see someone follow their dreams. Her determination and talent have made her dreams a reality."

While she already has the support of the cast and crew, as well as her son, who made her cry when he told her, "I'm proud of you mommy," Ashlee just hopes the show, "Can take the best of what I can do and apply it."

Everyone at Soaps.com would like to congratulate Ashlee on winning I Wanna Be A Soap Star and will definitely be tuning in on December 26th to see how she fits into her new home in Salem.

UPDATE DECEMBER 7: Ashlee will be portraying a psychic, Crystal! Look for her December 26 2007!

James Reynolds Goes One on One with...