Racole pairing?
Victor giving Rafe tips on how to take Nicole down really threw me, in a good way. Who better than Victor to help the Fed? I had wondered if Rafe’s plan would backfire and that he would somehow become interested in Nicole or that she’d fall for him. Could it still? Nicole (Arianne Zucker) certainly has chemistry with everyone on the entire cast and I saw this chemistry with Rafe and Nicole a while ago during their arguments on the pier or at Cheatin’ Heart. Course chemistry's usually not the issue. The writing and character development is. Still, I don't think we’ll see a Racole pairing. Do you?

Are we still on Safe vs EJami?
When Sami learns that EJ was the mastermind behind the Sydnapping, will we see a "Safe" reunion? Will EJ go to jail? *laughs uproariously* Or will somebody shoot him? *wink* Though we know she loves Rafe, Sami did tell EJ she loved him. It’s all so perplexing. Can Sami even live happily ever after? When Sami was with Lucas she loved him but she did have a thing for EJ. After she decided to marry EJ on the spur of the moment, she made out with Rafe. Sami told Rafe that he only wants an ideal version of her. Is she cutting herself short or is she right? This remains to be seen. I was a little proud of Sami for not asking her family’s opinion on her decision to marry EJ but I also found it immature and pigheaded not to hear out those who love and want to protect her. We all know Sami pushed up the date of the wedding only because she saw the man she loves making out with Nicole. She shouldn't be in a relationship with anybody right now if she has feelings for two men and EJ should have more respect for himself and tell her that. I wonder, did she realize this when she put EJ off when he in his own delicate yet bizarre way asked for sex?

The dark side.
Brady with an edge is a hot storyline and I’m not just on about his shirtless scenes. Martsolf is doing well with the dark side of Brady and I look forward to more. Nice touch with him visiting Isabella’s place of rest. Do you think it’s a good time for her to return? Vote!

I’d love to hear about your thoughts on what went down this week. Perhaps you too have as many questions as I have or are just as confused as I am over a few of the Salem goings on!

Have a terrific weekend everybody and I’ll see you back here next Friday unless of course you join me on Twitter @soapoperafan, and Soaps.com’s Facebook Page! 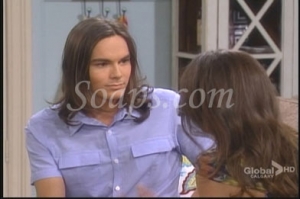 Psst! Since I was on holiday last week I may touch on last week’s episodes a little.

This was a big week in Salem. Hope was sent to the pokey, the slammer, the can, the big house. Sami reverted to a sixteen year old after watching Nicole playing tongue hockey with Rafe and in a less than inspiring turn, Chad’s old man was revealed to be Stefano. Will asked Chad out on a date and Vivi bought a sarcophagus for Maggie. And that’s just the half of it. Let’s get out the scalpel and start dissecting.

Committing a felony.
Stephanie inserted fingers in her mouth and chomped on her cuticles in an attempt to play coy with the cute computer hacker Ian, so he’d be more amenable to committing a crime worthy of spending a little more time in the clink than Hope will. Let’s back up. Stephanie was dirty friends with Ian while she was in University and when she didn’t get the grade she wanted, he hacked into the Uni computers and changed her grades? Was I asleep during this? She’s never been this sketchy. She’s never been this interesting. But I’ll admit this does seem plausible considering her grades would have slipped some when she was raped by Ford, but I still dislike how the show seems to rewrite history every month in an attempt to get their storylines to flow.

The one happy couple?
In another strange turn, Lexi and Abe discussed being ready for another child. As you’re well aware, I can’t stomach baby storylines but must admit that these two may be the one couple strong enough and steady enough in Salem to have one. I may just be happy for them.

Oy. Salem’s only good cop will be out of commission for a few months.
In reality, it takes months sometimes to procure a court date but in Salem, anybody can receive a court date in the blink of an eye. Fancy Face pled guilty to taking down all those big strong strapping men and a few of them gave some moving testimonies. Not Arianna, who took the stand and tried to throw the book at Hope. It’s understandable considering she took the fall and her reputation was seriously effed up. Hope won’t do the two years. Frankly, I’m surprised she’s doing any, considering nobody else goes to jail in Salem for their crimes! I hope it makes for interesting story fodder. Maybe Roman will get a hold of her for some recognizance work or she’ll find out something nasty other than the usual is going on in the jail and break the story wide open. But what will happen to Bope? On the stand, Bo admitted when his wife moved out of their home to get a new perspective, he thought it was permanent so he moved on. He blamed himself but shouldn’t the doctor shoulder most of the blame for handing out bad prescriptions? 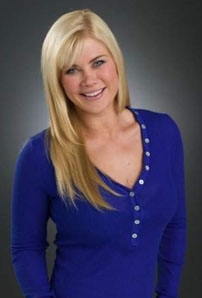 Days of our Lives’ Alison Sweeney Stands Up To Cancer

Days of our Lives Saturday Teaser Poll: What Does Chloe Reveal? 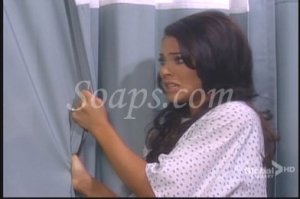