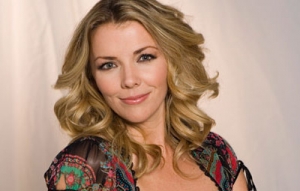 Heads up for Christie Clark fans! Christie and hubby have put up a cute photo of their little girl, Hannah, on her official website. Check it out here.

Just a little update for Christie fans. The glowing mom-to-be and her husband recently returned from spending the holidays in the United Kingdom to announce some more baby news. They now know that they are going to be the proud parents of a baby girl. Not only that, but they have already given her a name, Hannah, which means: by God’s grace. The birth is expected on April the 5th.
We’ll keep you posted on this.

Congrats again to Christie and David on the good news! And remember, you can always stop by the messageboard on her official and offer her a few kind words yourself.

Christie Clark, (ex-Carrie Brady-Roberts-Reed) announced a little bad news, along with some good news on her Official blog. She tells about how her dog recently passed away, and a few weeks before his death she found out that she and her husband of 5 years, Thomas Barnes, are going to have a baby!

Christie Clark sailed into Salem in 1986 as a teenager and played sweet naïve Carrie Brady. The character had been around since 1982, but even though Christie didn’t originate the role, she made it her own shortly after her arrival. Her character was loved over the years and was last seen on screen October 26, 2006, when she and long time love, Austin (Austin Peck) married and took off to Zurich, Switzerland to run “Austin Reed and Company”. Rumors flew around the net (as they often do) about a return, but as of yet, there has been no fact to the chatter.

Soaps.com congratulates Christie and Thomas and will try to note when the little one arrives. It appears as though she would be a few months along. Check out her blog or her Official website for more information about Christie.

Congratulations go out to Christie and husband Tom who now have a beautiful baby girl, Hannah Bella Barnes! Christie gave birth to little 5lbs 10 oz Hannah one month early, on Wednesday March 19, 2008, Christie says on her blog. She is described as having “Her father’s energy and wanted to join the party a bit earlier than was planned. We are just falling in love with our little lady, and learning the ropes as we go.” Christie mentioned that she didn’t get to read the last few chapters of her pregnancy books in time for the early birth but we’re sure she’ll do just fine as a new mom!

Both mother and baby are doing very well.Soaps.com wishes the new family all the best!

Days of our Lives Wardrobe Answers!