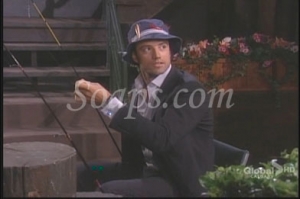 Is Tony the da-da? (Soaps.com)

It’s always a treat to be reminded of past characters on the show and we saw that twice this week with Melanie calling Max and Adrienne discussing her brother Steve. We’re coming close to ending the nighttime Hope storyline, which was our main focus this week and my big beef goes out to Abe who wore a suit to a baseball game!

Dare I say we stumbled upon a decent triangle?
I don’t want to encourage the powers that be to write the dreadful love triangles they’ve been known to jot down but I think they could finally be on to a good one with Victor, Maggie and Vivian. It’s a little adorable – a little unhealthy that Victor has Maggie on a pedestal. There’s only one way to go from up there and that’s down. Still, I’m enjoying their scenes and the dialogue writing for this threesome even if Maggie’s pushing him away and poor Vivian’s now vying for his love. Wouldn’t it be something if Victor actually started having feelings for his wife other than hatred?

Stop using good actresses to fill dead air.
It’s as though they write the talented Judi Evans (Adrienne Johnson) in when they have some dead air to fill. She’s better than that. Melanie too should be doing more than worrying why oh why her dear Philly is hanging around her dad’s place. When I hear my husband stops by my dad’s place, I am happy but have never been known to demand details! I miss old Melanie who had more to do other than further Daniel and Chloe’s painfully redundant storyline.

Secrets secrets!
Did you crack Kate’s code on Chad’s paternity this week? She said, “The evil men do live after them.” This has me even more under the assumption that Chad is Tony’s son. We’ll see.

Shaved head mass hysteria.
Soaps.com was in Greenville SC this past weekend covering Days Into Night and posted a photo of James Scott with his newly shaved head. Many fans are assuming that must mean he’s going to prison. I don’t get it. Since when did USA start shaving prisoner’s heads? Lindsay Lohan look out! I’ve never seen such talk about an actor changing his look, thus proving once again that love EJ or hate him, he’s one of the most popular soap characters around!

More firings.
Gabriella Rodriguez was replaced this week as Gabi as Lindsay Hartley was let go as Arianna. I didn’t find Gabi likeable to begin with but she could grow on me if they start writing her with a more interesting personality. Some of the actors gave their opinion Lindsay’s firing. Galen Gering said fans didn’t take to Arianna and that due to budgeting issues, the show can’t spend money on a character/actor that isn’t getting a fanbase. If that were true, they’d have fired the actors who portray Stephanie, Nathan, Carly and Chloe. The acting isn’t always at fault and in this case it was not. Clearly, (in my mind) it was due to faulty writing and directing. They should have written her as more likeable. As of today, the majority of fans are unhappy with this firing so so why not rehire and rewrite her? Psst take the poll! While they’re at it, rewrite the others above. Writing characters out constantly like this does not bode well with the fans. If Corday had a clue he’d have kept Lindsay and gave her a new identity. Hell, with all due respect, if he had a clue a lot of things would be different.

Five big ones.
We learned that Nicole’s secret code is a series of bank addresses and a locker number she’s using to hide copies of her blackmail tape. EJ gave Nic Nic 5 million bucks in a nod to the amount Kate gave her in the past to marry Lucas. My guess is that it’s just a coincidence but I like being reminded of the past - in a good way.

Brady was feeling happy so he went to see wannabe Alice, Maggie, who imposed her advice upon him about ditching Nicole while holding him down on the kitchen table. Alright I’ll cut her a break. She’s his sponsor but I wish the advice she gave was more – and I find this word so overused – organic. We’re only seeing these scenes because Brady’s about to say sayonara to AA and find comfort in his old pal 'Aunt Nora'.

Hypnosis? Again?
Carly turned into Marlena and hypnotized Bo with the Salem Mugger in the room. It made me feel happy and nostalgic and a little sad, too, that Bo’s happy place was at Hope’s side on the "Fancy Face." Bo’s stares at his ex were quite eerie and though I razz Carly a lot, I wouldn’t wish that pain on her. What does this mean for Bope’s future?

Mean Mean Mean.
Special thanks go out to Sami this week for not blubbering up the screen when her kid channeled EJ’s mother Susan and called her “Mean mean mean" for refusing his whining for a popsicle. He really is her son. There were no tears and I was proud but the scene was ruined when EJ droned on about what a good mother Sami is. Again. This is the only thing these two have to discuss. Give them a shared hobby already. Though Sami yelled to the pub that she’s in love with Rafe, she still became teary eyed by that big rock EJ reeled in on the pier when he proposed.

There was great balance this week though the ratings dropped lower than we’ve ever seen. What are your thoughts on that and on the week past? Let’s check out Matty’s DOOL thoughts on Soap Opera Fan, and maybe we’ll catch you on Twitter @soapoperafan, and Facebook. Join us!