Days of our Lives’ Marcus Patrick in the raw! 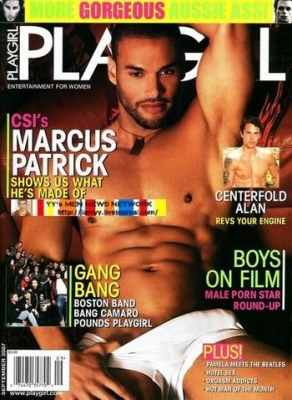 Marcus Patrick has been playing ex-ISA Agent, Jett Carver, since June 1 2007. Fans are enjoying the new addition to Salem. The model turned actor, finds modeling to be a bore, stating, “Acting was the Choice for me.” Well this is lucky for fans who appear to be enjoying Marcus’ role as Jett on Days of Our Lives.

This isn’t Marcus’ first acting gig in daytime television. He appeared as Jamal Cudahy for a short stint from June 29, 2006 – September 25, 2006 and also appeared briefly as Father Denny that same year, on Passions. Marcus appears to have career aspirations that he works on steadily. When this self proclaimed “free spirit” is not working on the set of Days, Marcus tells me that he can be found in the recording studio, where he’s busy recording a new CD. Take a listen to the energetic sounds, here and let us know your thoughts. Marcus tells me, “Some of my songs will go towards the Soundtrack for “THE DARK PARTY”, (which is) the film I just wrapped with Kadeem Hardings.” This Soaps.com reporter promises to update you with the release information once it becomes available.

Marcus also recently did a photo shoot with Playgirl for their September issue. About his foray into the artistic side of modeling he says it was his first time. ”I Just have a free spirit…. I believe God put us on the planet naked, so what’s the sin in being naked?” No argument here. I don’t see nudity as a sin, but then this article’s not about me! Marcus also recently posed for a risqué calendar for his fans that he says is tame in comparison to his shots with Playgirl. He’s right. I saw the photos. When I asked Marcus, “We hear fans should expect to see a peek at your behind! I assume this was planned and that you’re quite comfortable with your body, but care to comment on what friends and family are saying about the risqué calendar?!”

Marcus replied, “All my friends and family already know I am crazy, so it was no real surprise to them. I have often said to them watch out!! If I ever win an award, dare me, I don’t moon the whole event!!!” That’s a sure way to turn an event into something to remember! We’ll keep this in mind just in case there are any awards in this actor’s future!

Fans can make their purchase of Marcus’ new calendar at Marcus Patrick’s Store.

Check back with Soaps.com soon in a few weeks, and hear all about how Marcus spends Halloween, in our themed interview with several actors in the ‘Latest News’ section!

And thank you, Marcus, for your candor, which is much appreciated!