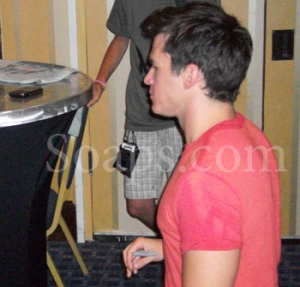 It’s always fun to chat with the celebrities that portray the characters on our favorite shows, and get an inside scoop from the person that knows those character probably better than anyone else. At the recent Days Into Night Charity Event in Greenville, South Carolina, I had the pleasure of meeting up with Nadia Bjorlin (Chloe), Eric Marisol (Brady), Galen Gering (Rafe), Shawn Christian (Daniel) and Mark Hapka (Nathan). Read below to see what each had to say about the happenings in Salem.

Any fan of the show that knows Chloe certainly notices the web of destruction she’s weaved over the past few months and it’s only a matter of time before she gets so caught up in it that she can’t get out. I remember Chloe when she first came to Salem, many years ago. She was the nerdy teen with the big eyeglasses and the “goody, goody” reputation. Her adulthood, though, has been challenged with failed marriages, affairs, her inability to conceive a child and now one lie after another.

When asked about what she thinks about Chloe’s twists and turns, Bjorlin says, “I think Chloe‘s insecurities are rooted in some things. She has a lot of trust issues and abandonment issues that are due to how she was raised as a child (foster home to foster home until she got with her parents as a young adult). The stakes are so high for her right now. Chloe has never felt this level of love before in her life, and she would do anything to hold onto it! It causes her to act desperately, but it comes from a good place. She wants everything, for once in her life, to be perfect. Unfortunately, she’s losing her head and making some bad decisions in the process. It’s those insecurities that have allowed Vivian to control her so easily. She’s suffering the consequences, and she is going to continue to suffer the consequences of this very bad decision that she has made. It’s fun to play it out and it’s not so far-fetched from reality.”

One fan even joked during the question/answer section to Bjorlin, “Doesn’t Chloe have something she needs to say to Daniel? Actually a lot of stuff she needs to tell him! I think you should just take that time right now to act it out on the stage.” Shawn made a quick response, getting Nadia off the hook, “I don’t think there’s enough time for Chloe to say all she needs to say!”

Shawn Christian had this to say when I asked him about his character Daniel and his relationship with Chloe, “Two things. First of all let me say that Daniel knows more than people thinks he knows. Secondly, he would do pretty much anything for love and the woman that he loves. So, we will see where the road takes us! Many Dr. Dan fans (myself included), wonder about Daniel’s relationship with Carly (Crystal Chappell) and what his true feelings are for her. “Well, she is my baby momma,” Shawn exclaimed. After a good laugh he stated, “You know, there’s an unwritten story there that has to unfold. Sometimes you have to see a story from end to beginning to really understand the details of it. That’s kinda what we have here. You know, we have a history that goes back to before Melanie was born.”

Soaps.com wanted to know more about this (Spoiler Alert!) downward spiral that Brady (Eric Martsolf) is supposed to take soon. Eric seemed super excited about the upcoming storyline, "You know, I’ve been waiting a long time for this downturn! I’ve played such a good, right wing character on NBC soaps for nine years now, so I’m excited to do this. Brady’s giving in to some of his substance abuse problems. You know, it’s a really horrible thing in real life, but its great stuff for an actor to play. He‘s been having some problems with a certain tall blonde that is manipulating the heck out of him and the only way that he knows how to deal with it is to get back on the juice!"

As fans may remember, Brady’s cocaine problems happened off camera a few years back, but the character has resisted the temptation since he’s been back. "It’s all coming full circle for Brady," says Martsolf. When asked about a future with Arianna years from now, Eric said, "Well, we don’t know the context in which she is leaving yet. Soaps can get rid of characters in many different ways. They can send them to Switzerland for a brain surgery or many different things. [Reporter's note: Was that some kind of teaser to EJ’s shaved head? Who knows at this point!] Those are doors that haven’t been opened yet. We will just have to wait and see!

When I spoke with Galen (Rafe), I wanted to find out what his feelings are for Sami right now, since she is obviously showing feelings for EJ as well. Galen smiled and chuckled at first, "Rafe loves Sami. I mean, she’s his girl! He loves her, but he doesn’t care for EJ, for reasons that are pretty obvious! He loves Sami and he wants her back. If she’s happy with EJ, then so be it, but, I don’t think that’s the case. Things are looking good. I’m hopefully optimistic!"

Soaps.com wanted to know if Mark Hapka (Nathan) thought that his alter ego was over Melanie (Molly Burnett) yet. "What do you think," replied Mark. "I think that Nathan wants to believe that he is over her, and he wants to believe that he really loves Stephanie, but I don’t think he’s to that point yet." I probed deeper and wanted to know what Nathan would do if Philip and Melanie were to separate in the near future. "I think Nathan would be extremely tempted. To the point that I think he would sabotage everything he has with Stephanie. I don’t think he is stringing Stephanie along or anything, but he just isn’t whole-heartedly with her yet."