Days of our Lives Co-Stars Speak Out About Lindsay Hartley Firing! 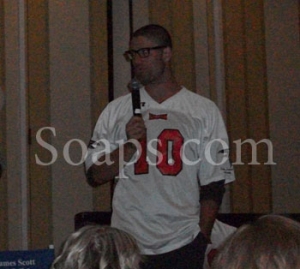 Like some of us here at Soaps.com, the viewers of Days of Our Lives noticed some chemistry about to happen between EJ (James Scott) and Arianna (Lindsay Hartley). One of the fans at the recent Days Into Night Charity Event, asked James about the chemistry and a possible pairing between EJ and Arianna. Like me, James paused and thought. He then took a second to respond and leaned in to discuss briefly with Galen Gering (Rafe), who was seated next to him. He then got on the microphone and announced the news to everyone that Lindsay Hartley had been let go from the show. Some in the crowd knew this because Soaps.com had reported it when the news broke, but the majority of the crowd was in shock over this recent casting news. There were gasps among the fans and James stepped in to continue answering the question, once the shock had worn off. “I thought for a while that there might be something there, and it would be nice. It’s been a long, long, long, long time since EJ has had any physical action! A long time!” He went on to say, “Lindsay is a great person and a wonderful actress. I’m sure she will be working again very soon.” Galen Gering (Rafe) went on to say similar things, but also mentioned the economy. “In these times and the economy the way that it is, they are only going to invest in characters that really connect with the audience. It’s unfortunate because her character (Arianna) had a rough start with the storylines, but it seemed to be taking off recently. That’s just how it goes in this business though.” It was a bittersweet moment.

Later during the event when Eric Marisolf (Brady) announced that he had just received a text from Lindsay, wanting to know how everything was going in South Carolina, the crowd jumped to their feet so that he could snap a quick photos and send it back to her. Hopefully she felt the love from there. I must say that I was shocked by the news as well, when I first read about it. It did seem that her character was just beginning to get out of a rut and start to develop. But, this is daytime after all! Who knows exactly how she will leave and under what circumstances. No one is ever really gone in Salem…right?