Days of our Lives Favorites On Dancing With The Stars? 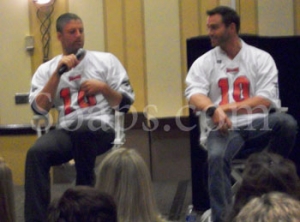 Many fans have been asking this question and Soaps.com has the answer! Unfortunately we’re telling Days of Our Lives fans not to get your hopes up too fast! Eric Martsolf (Brady) told the crowd at the recent Days Into Night Charity Event, “I actually took a meeting with the casting person for that show, and she was very, very frank about it. If you look at all of the soap stars that have been on that program, they have all been from ABC shows. They are probably not going to promote someone that is from another network. So, until NBC comes out with Dancing With the Soap Stars, we will just have to wait and see on that one.”

Do you remember the ABC soap stars that appeared on DWTS? Here’s a little reminder for you if you have forgotten. All My Children’s Susan Lucci (Erica), Aiden Turner (Ex Aiden), Cameron Mathison (Ryan) and the 2005 season grand prize winner, Kelly Monaco (Sam) General Hospital. We can always hold out hope, right? The fans got Betty White as the host of Saturday Night Live back in May, through a Facebook campaign. If there are enough viewers who want to see it, it’ll be more likely to happen. If you want to see your DOOL fans shake their booties on DWTS, make your voices heard!