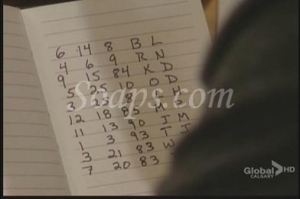 There is usually one good show out of the five that airs each week. Luckily, the week started out on the right foot with the shocker of Madeline’s death and ended with a good cliffhanger. Let’s get right to it.

Madeline’s demise.
Poor Chad feels guilty about Madeline’s death and though he’s in mourning I still think the DA is a bastard for heaping the abuse on to Chad and accusing him of killing Madeline. He’s never been a great father anyway, Chad divulged before Kate alluded to Chad having another father anyway! I am guessing it’s Stefano or even Tony, considering all the chatter about ole T as of late. Though, Matt from Matt’s DOOL Musings suggested the father should be Kate, who we would learn is really a man. This was simply a nod to the campiness of old school DOOL and Passions that we miss! Do you like the idea? Beats most of the other storylines! Kudos to Casey Deidrick for making Chad so believable and kudos for an interesting storyline.

Nathan and Steph.
I doubt even living in sin will perk up these two. I’ll admit I felt something for them for a split moment when they professed their love for each other and kissed at the pub. This must mean they’ll break up soon. Whenever soaps of today show love for a fleeting moment, the romance is short-lived. Bets that they break up when Melanie learns her hubby two timed her and Nathan remembers he loves Mel, not Steph. *sigh* Bets on Steph then pulling another stunt to keep Nathan. Is it any wonder why soaps are declining? When did romance leave the soaps?

Time to die.
Kristian Alfonso rocked those scenes. My beef? I wasn’t a fan of the recycling of the Sami trying to set EJ on fire storyline.

Danloe gives me a headache.
I wanted to throw cold water on Daniel after he decided not to pursue his argument with Chloe about Father Matt’s reason for not marrying them, but then he scored a few points with me by walking out on that ditz after she flip flopped once again about their wedding date. This storyline is all kinds of played out and tiresome. How come they’re never at the beach or any other fun place? Even Madeline and Charles who nobody gives a sh…oot about, drank champers on the beach last week! Why draw things out and make fans fast forward through the monotony? Just break them up and get it over with.

Vivi’s in love?
Did you get a load of Vivian calling Victor her soulmate and moping around trying to find ways to win him over? Wonders will never cease!! Great twist.

A poster from Soaps.com forums, ‘ITivoDOOL’ says, "She should just tell him because I am sure he will find a way to fault himself for her fling." Exactly! Get this guy some cajones.

Dr. Baker.
I’m thrilled they’ve kept this actor and character around, even though his private dialogues are a little odd to me. I’d like to see him interact with other characters and become a permanent fixture.

Ain’t Life Grand?
Nicole blackmailing EJ has been music to my ears and Ari Zuker was fantastic all week, putting EJ in his place! EJ screaming bloody murder right in Nicole’s face caused me to almost fall off my chair laughing. James makes EJ look barking mad more than any character I can recall! EJ’s so unstable and Nicole really should be concerned but she feels on top of the world with what’ll become a lengthy blackmail list that’ll put B&B’s Steffy’s blackmail of Brooke last week to shame. I was on Twitter @soapoperafan talking with @TDM_EJole_Forum about Nic Nic as usual and laughing about what Nic’s doing to poor EJ and she says to me, "EJ is her new Pookie!" Could. Not. Stop. Laughing. She even recommended getting him a pink collar, of course to match all those pink shirts he sports.
I also enjoyed Brady kissing Nicole this week. Not that I want them together but oh boy was that hot! Incidentally, Brady and Arianna both won for hottest beach bod in our Best male and female beach bod poll!

Safe vs Ejami.
I’m neither a "Safe" nor an "Ejami" fan. We know Safe will win out because Corday said so. They’re writing Sami as obviously still in love with Rafe and terribly jealous that he’ll move on with Tiffany or somebody else. She only mentioned Tiffany half a dozen times and then dreamed she shared a kiss with Rafe. I’ve noted her constantly nagging Rafe to admit he wants her in his life so that she can admit it. Same old Sami doesn’t like to appear vulnerable. Though she says it’s over between them, she evaded Rafe’s question when he asked if she loved EJ, thus telling me that she does not love EJ. I believe she cares for him and can see their sexual chemistry but it’s not enough. She may want to love him and is close to it because she said she always knew he could be the man she ‘thought’ he could be. I don’t know and it makes my head hurt to ponder it further.

Where is Anna?
It’s high time they resumed her story. The problem with dropped storylines is that fans lose interest when they are resumed. Lack of airtime makes us less interested in the outcome or the character.

Roman, give your head a shake.
Roman told Abe that Carly’s emotional display at the hospital proves she really does care about Bo. Was there ever any doubt? What a ridiculous and out of place line for them to have Roman say.

Those are my thoughts on what went down in Salem this week. Care to share yours? If not, join us on Facebook for all your soapy news!