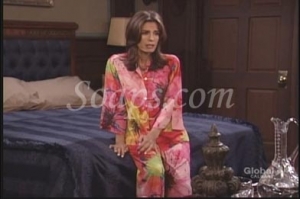 Did you think they'd forget the candles? (Soaps.com)

This week the ‘evil’ theme returned in form of name-calling, we’re seeing a lot of profuse apologizing going on and most characters requested a “little chat” that seemed never-ending, and lastly, everyone and their southern Grandmother keeps referring to whistling or singing Dixie. Everyone seemed on edge which is foreshadowing secrets coming out but nothing really happened. Let’s dig deeper.

“Little Chat.”
We need to have a “little chat” about Carly, who I’d like to see snap – and snap out of this sweet and innocent persona. I’ve always seen Crystal Chappell as a powerhouse and have a desire to see her put in a role as a formidable woman – why not use her in this capacity rather than this meek and mild character with no cracks in her personality? Only the matriarch Alice Horton could get away with that and Marlena Evans to some extent because she was a Psychiatrist. Though I’m still not feeling this character, my absolute favourite scene was Hope telling Carly she’s not herself when she’s with Bo. While Dr. Who music played in the background, Carly’s eyebrow went up and her jaw dropped while Hopie moved in close to whisper this to her. How fantastically creepy!

80’s Emo Tunes.
Chloe lied to Carly about using protection with the ‘other man’. No way did either of them have condoms that fateful night and how obvious was it that Philly ‘stumbled’ upon the truth about Chloe’s pregnancy from Ellie May Clampett. I mean Melanie, who *gasp* in a surprising twist just happened to mention she’d like a little cottage with room for a baby?

Daniel’s been alternating between glowing and brooding and out of the blue ferociously bit into Chloe for hanging out with Philly too much. It didn’t seem warranted considering he gave no warnings that he was feeling jealous before now. It’s holes in the plot lines like this that make fans stop watching. After he got everything off his chest, all Danloe did was spend ten minutes apologizing to each other profusely and then used sex to dampen down their mistrust of one another.

Instead of giving Mel something more interesting to do they’ve got her back matchmaking with Bradianna whose ship sailed a long time ago. What a waste of talent and storyline.

Laughing Penguin.
How predictable was it that Rafe showed up to be Sami’s shining white Knight when Johnny lost his Laughing Penguin? I would rather see the romance blossom on its own but instead it comes off as structured as a poorly choreographed dance move. On the opposite side, the second great scene of the week was on the pier with Nicole and EJ, whose eyes nearly bugged out of his head as he sweated, stammered, stuttered and shook violently when Nic Nic played the recording of his admission of guilt. He was a man unhinged. He’s always unglued. He’s so obsessed with Sami not learning the truth that he even went off on innocent little Johnny.

The doctor wasn’t Rolf was he?
What kind of doctor would give Abe and Hope that freaky deaky medicine that the Doc told Abe causes high-strung women to have alternate personalities? And did it look to you as though she was sniffing smelling salts in her hand when she witnessed Barly making out in public? She pulled a Maggie and made it her business to let them know public displays of affection with somebody other than her would ruin Bo’s image. I somehow doubt this but the sight of the kiss was so damaging she went home, put on one of Phyllis Diller’s pajama sets, took a sleeping pill and awoke to tell Baker she’s planning on murdering her husband like her hero Carly Manning did. Hey, if Manning got away with it why can’t Hope? Care to vote on whether or not Hope should kill Bo?

Carly and Bo chatted at length this week along with Justin and Adrienne about Hope’s inconsistent behaviour and Bo admitted what’s good for the goose isn’t necessarily good for the gander (Hope). He’d prefer she pined away for him. Carly was insecure – I guess – and so they had sex to dampen those feelings much like Danloe did.

Salem Beach.
I didn’t know Salem allowed drinking alcohol in public but there they were, Chuck and Maddie, sipping champagne on the beach. One last time before she dies. I’m happy to see this set being utilized often and hope this keeps up but would love to see a mystery/adventure begin on the beach. The show isn’t doing well in the romance department. There still isn’t any couple I’m interested in getting hot under the sun… or the stars so an adventure is in order, but unfortunately the same storylines we’re seeing now are being played well into August.

I hope you were at least a high paid call girl!
I wouldn’t care if my mother was a prostitute in the past but then I’m not 17 and am no prude but Chad sure is mortified that before he was even a thought his momma played doctor with a few johns. It’s not as though it’s going to affect him. It doesn’t matter anymore anyway because like Tony DiMera, she fell down the steps and hit her head during their bickering and won’t be around to finish her explanation. Oh the guilt he’s going to feel. It’s a shame he has nobody to turn to. Charles? Right…Maybe there’s another Salemite out there that’ll take him in. Kate?

It’s good to see the show utilizing Chad more but I’d really like to see him with the older crowd. He’s the Luke Perry – Dylan character on "90210" that’s a little older and cooler.

Recycling.
Kate found Stefano asleep in the ER and assumed he was dead. This happened the last time he went off his insulin. Why repeat the same freaking scene unless there’s a purpose? Do the writers have amnesia?

That’s all the ranting and raving I care to do this week. I’d love to hear your own thoughts of the Salem goings on so please leave me a comment! Incidentally, Soaps.com is on Twitter @soapoperafan, and Facebook and we'd love if you joined us there and Matt Purvis' DOOL Musings. You'll split a gut!!