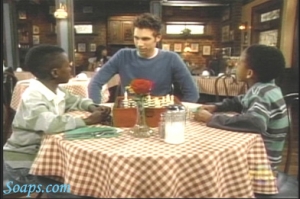 We’ve been treated to a brand new storyline from head writer, Hogan Sheffer, on our favorite soap, Days of Our Lives. With any storyline in daytime, it comes with its own special brand of rules, but most of us forgive the lack of reality because we adore the soaps, so!
This is a low-down on what happened to Nick Fallon (Blake Berris) after he suffered a head injury during a bomb blast at Sami and Lucas’ apartment.

One fateful night in Vegas, the ever responsible, nerdy-loveable character Nick Fallon marries swindler, China Lee (Gillian Iliana Waters). When Nick comes to his senses, he asks China for an annulment but before he can sign the papers, he’s saddled with two young boys, who we assume are China Lee’s children. Still with me? Next, we find out that China has been incarcerated for soliciting and has to serve 30 days in jail while the kids spend time with their new step-daddy! After Nick recovers from the shock of it all, he decides not to call CPS, but take the kids home with him. Clever Nick gets to know the children and comes to the assumption that the kids can’t possibly be China Lee’s because they seem well educated, while China Lee is more street-wise!

Soon we find out Nick is correct in his theory when China Lee returns to Salem after time spent in the pogey and admits she was only taking care of the kids for their powerful, and now deceased, father. We leave off with Nick’s uncertainty and a stranger following the kids. At least Nick can take care of the kids now that he’s suddenly a Science Professor at Salem U!

What comes next? We’ll have to tune in daily to find out!

There is no denying that China Lee brings a breath of fresh air to the show while the boys, Demarquette (Jalen Stokes) and Artemis (Kwesi Boakye) steal our hearts just by being adorable!
The only question is, are you digging the storyline or not? Now we all know that if this were reality, the police and CPS would have already been in on this case. It’s completely unrealistic, yet the fact that nobody has called them doesn’t faze our characters one bit. In fact, for those of us who are long time soap viewers, we too tend to ignore the ‘reality rule breaking’ and simply enjoy the show, while others roll their eyes in frustration, thinking they’re being taken for imbeciles! Which camp are you in?

Here’s what a few of our posters had to say about the storyline and the two little men. Perhaps you’ll make your thoughts known, too?

Goldenmango brings us a thread she calls, “Would Nicks “step children” make for some Juicy storylines?”

“I’m thinking new characters, new scandals. Nick becoming the next Days, “Hero”…or…not. Should the writer’s jump on this bandwagon?”

LuAdanie replies, “I’m intrigued! I like where this storyline is going.”

LBowen has other ideas. “I think it’s very cool what he’s doing for those boys, but also it seems very unrealistic. It’s hard for me to get into because it’s so far-fetched.”

Oldayzfan thinks they (Dee and Artemis) are a much needed addition to the show. “I love that they’re giving Nick an interesting storyline. I hope the writers spend some time on developing a good storyline with these kids. It sure would be a great way to bring in another powerful family dynasty. Perhaps one that will bring the Dimera’s/Brady’s/Horton’s together.”

DAYSFAN1987 isn’t too hot on the storyline. “I’m not sure I see the point to the storyline with Nick and the kids. They need to have Nick focusing on getting his career and life back on track – not taking responsibility for two kids that are not his. After watching today’s episode – I find out they don’t even belong to the woman who left them with him. She has to leave the country but is going to leave the kids with Nick. It just doesn’t catch my interest – it’s too out in left field for me to get into.”

All interesting thoughts and valid opinions. Care to share yours?

Days of our Lives no longer on...