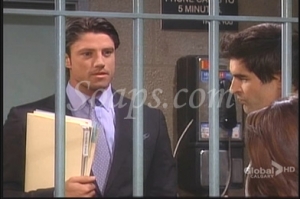 We spent a short week in Salem this week. The theme of the week was ‘romantic entanglements’. We saw some romantic stories moving ahead after Alice’s memorial storyline ended and most folks went home. Let’s have a closer look…

Hot ‘n’ Heavy.
It was obvious that Sami was thrilled to have Rafe back in Salem and Rafe’s return had Sami on edge and hot to trot with that big ole kiss he laid on her. But then he told her – lie – that it was goodbye. Why? I was as confused as Sami, who didn’t mind making out a little with EJ when Rafe was gone but now that Rafe’s back, she’s not even prepared to admit she’s attracted to EJ, who declares he loves the blonde. She told him she didn’t feel the same – that she saw him only as a friend. I believe her. Her reaction to his admission was of surprise and discomfort, but there’s no denying that she’s attracted to him. He tried to prove that she had more feelings than she was letting on by making a move on her. She panted like a dog in heat when he got into her personal space, so why didn’t she just tell him that she is attracted to him but that it doesn’t constitute love? Unless there is a little more to it. She hasn’t had sex in ages, and they’ve great chemistry, so I understand the need to reach out for contact, and she does care for him as a friend, but love? Her feelings for EJ have never been uber clear to me. Mostly they make my head hurt. Vote on who is hotter, Safe or Ejami?!

EJ spent part of the week sneering at Rafe and holding his files in Ari’s cell, discussing the arraignment that never comes…

Life after Bope.
Bo and Hope shared a moment at the cemetery when their hands met. Bo rubbed Hope’s thumb, and they gazed at each other for the longest time. Course, back at Alice’s place, the moment was lost and they bickered over Bo wanting to help his ex with Arianna’s case. I want to say Hope’s chip on her shoulder returned, but she obviously feels close to this case and wants to stay on it. I can understand that because I too like to see things through until the end, but Bo’s thoughts are that it’s been a while and no progress has been made, so Hope should welcome his help. These two make my head hurt too.

Fiery redhead.
I didn’t watch the show when Shane and Kimberly were on. I didn’t care for Kimberly when she returned to Salem for Shawn Sr.’s funeral, but this time around I’m digging her feistiness with Shane. I suppose I wouldn’t mind seeing these two on screen more.

Another fiery redhead, Mel, learned about Philly’s reasons for not giving Pocket to Kayla and Steve. He told her he did the responsible thing, but back then it seemed as though he kept Pocket from the two of the more decent parents in Salem. Hey, I can't blame Stephanie on them!

Cloak-and-dagger.
Kate looking regal in purple, met up with Bill once again, this time at the cemetery. It seems as though they’ve unfinished business which intrigues me but since he left Monday, I wonder what it was all for. She knows Madeline’s secret and since she hasn’t told Stefano yet, I’m not sure if she’s planning on blackmailing the prostitute turned judge or if she’s just buying time, wondering how to spill whatever it is.

It was good to see Nicole return to canvas after the memorial. She gave Chloe more bad advice and then went to the least private place in Salem (the pier) and spilled her guts in a call to Baker about planting that evidence against Ari. Course Rafe just happened along… Not to worry. I doubt Nic Nic will get caught!

Blooper?
Lucas took the photo of Tom and Alice from her living room on Thursday’s show but on Monday, there it was. Back. When I commented to Matt Matt’s DOOL Musings about this he said, "I think they have them everywhere, like coasters." I gather Lucas and Mike have left, though there was no mention of this.

Sordid affair and baby daddy.
No life Carly threatened Chloe to tell Daniel the truth all week but finally decided it should be up to Chloe and let it go. For now? I banged my head against the wall a few times in frustration and let out a primal scream at the umpteenth baby storyline we’ve had since Higley started head writing. What baby storyline will they write after this one’s over?

Sure the memorial has ended and life in Salem has gotten back to "normal" but I still say John and Marlena should have been there or been mentioned at the very least. So what's on the agenda in Salem now? Are we going to finally be in for a little summertime adventure? That’s what I’d like to see coming up. I’ll have to be content to have my own summertime adventure.