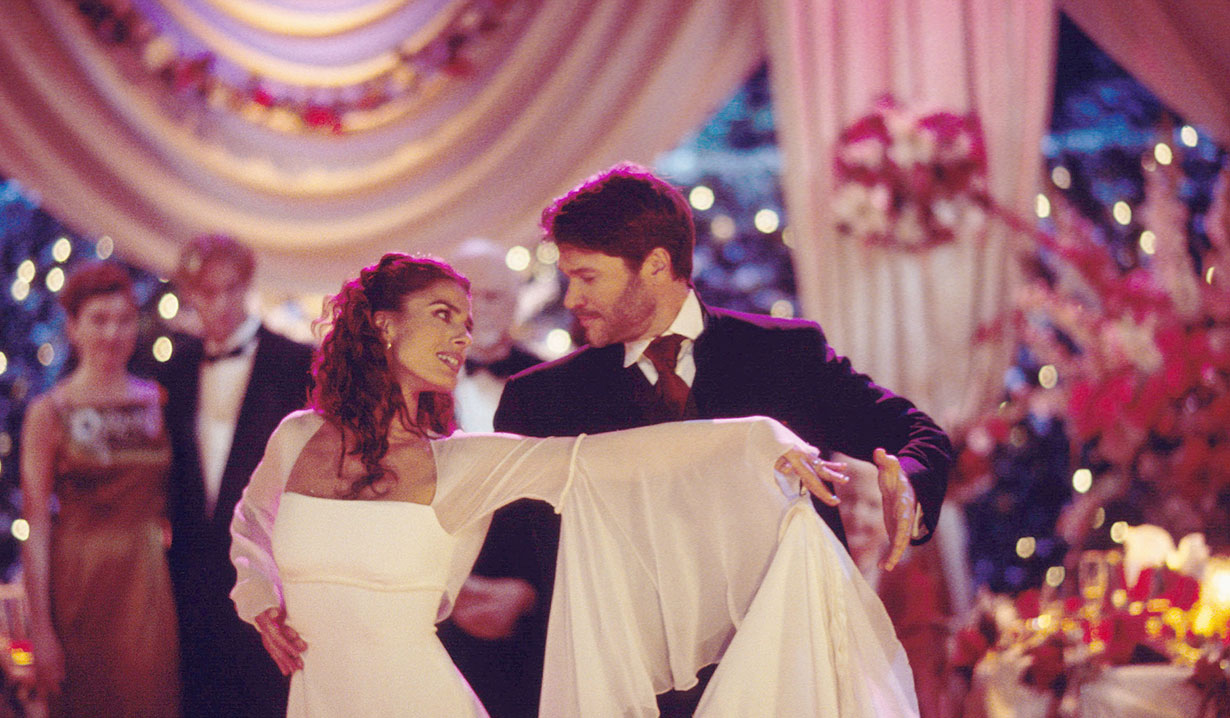 Highlights for “DOOL” in the early 2000s

Early in the 2000s the real Princess Gina was impersonating Hope (Kristian Alfonso), but Bo (Peter Reckell) exposed her and Hope was rescued. She gave birth to John’s (Drake Hogestyn) child, that later turned out to be Bo’s. Jennifer (Melissa Reeves) and Jack Deveraux (Matthew Ashford) had been living separately, but returned to Salem and moved in together for Abby’s sake. They pursued other romances, but after Jack pleaded guilty to murdering Dr. Colin Murphy, thinking Jennifer had done it (Murphy had made her sleep with him), and was later cleared, they remarried. Tony DiMera (Thaao Penghlis) returned looking to win Marlena (Deidre Hall) from John, and learned from Stefano’s (Joseph Mascolo) diary that John was his half-brother. John was also revealed as an ISA agent. Sami Brady (Alison Sweeney) had a nasty run-in with Tony that caused her to acknowledge her feelings for Lucas (Bryan Dattilo). Hope and Bo’s son, Shawn Douglas (Jason Cook, Brandon Beemer) and Marlena and John’s daughter, Belle (Kirsten Storms, Charity Rahmer, Martha Madison) fell in love, but split up when Shawn claimed to have fathered a child with Jan Spears (Heather Lauren Olsen, Heather Lindell) that was actually the product of a rape. Jan lost the baby and Shawn and Belle reunited and decided to wait until marriage to make love. Meanwhile, the Salem Stalker shot Abe Carver (James Reynolds), killed Jack with a brick, poisoned Caroline Brady (Peggy McCay), stabbed Cassie (Alexis Thorpe) to death, and slashed Roman Brady’s (Josh Taylor) throat at his wedding to Kate Roberts (Lauren Koslow). It came out that Cassie and her brother Rex (Eric Winter) were the offspring of Kate and Roman, not Marlena. Marlena was revealed to be the (mind-controlled) culprit and she stabbed Doug Williams (Bill Hayes) and suffocated Alice Horton (Frances Reid) with a homemade donut. Shawn and Belle broke up when she covered for her mother. Later, it was revealed that these characters were actually alive and well on the island Melaswen (New Salem spelled backwards.). Tony/Andre triggered a volcano and tidal wave on the island and Marlena, Roman, Jack, Cassie, Victor (John Aniston), and Caroline were presumed dead. The others returned to Salem, where Maggie learned Mickey (John Clarke, John Ingle) had remarried. Abe suffered headaches and went blind for a time. Later, it was revealed that those presumed dead were being held by Tony/Andre in a European castle. Nicole Walker (Arianne Zukor) seduced Brady Black (Kyle Lowder, Eric Martsolf) while Chloe Lane (Nadia Bjorlin) faked her death to avoid facing Brady after being disfigured in a limo accident. Nicole discovered Chloe was alive and performed plastic surgery on her after being mistaken for a doctor. Brady loved Chloe scars and all. Belle took up with Philip Kiriakis (Jay Kenneth Johnson, Kyle Brandt) when she believed Shawn had joined the Merchant Marines – he was actually held captive by Jan. Shawn tried unsuccessfully to stop Philip and Belle’s marriage. Belle gave birth to Claire and it took a year for it to come out that she was Shawn’s daughter, not Philip’s. Shawn’s girlfriend, Mimi (Farah Fath), knew but kept it from him. The reveal came after Claire received a life-saving liver transplant from Shawn’s deceased half-brother, Zach Brady (Spencer and Garrett Gray), who was killed when Bo’s daughter with Billie Reed (Lisa Rinna, Julie Pinson), Chelsea Benson-Brady (Rachel Melvin), hit him while texting and driving. Belle and Shawn eventually got back together and weathered a custody bid by Philip before marrying and leaving town. In the mid-2000s, EJ Wells, AKA EJ DiMera (James Scott) came to town and pursued Sami after she split up with Austin (Austin Peck) when it was revealed she had manipulated her sister Carrie (Carrie Clark) into a relationship with Lucas (Bryan Dattilo). 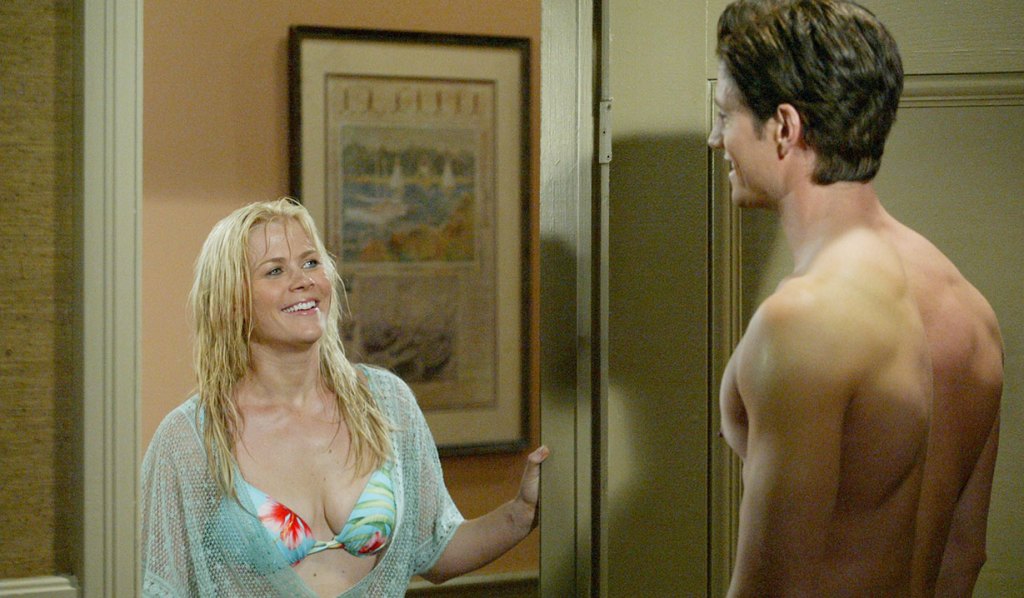 Sami had blackmailed Lexie Carver (Renee Jones) into helping keep Carrie and Austin apart by threatening to expose her affair with Tek Kramer (Rhasaan Orange) to Abe. Carrie and Austin married and moved to Switzerland. Meanwhile, a terminally ill Jack found his presumed-dead brother, Steve (Stephen Nichols) suffering from amnesia out of town. The pair returned to Salem in time to interrupt Jennifer’s (Melissa Reeves) wedding to Frankie (Billy Warlock), who helped cure Jack and stepped aside so Jack could reunite with his family. Kayla (Mary Beth Evans) was stunned to see Steve, but when his memory began to return, he realized Stefano and his son, EJ, had held him and brainwashed him and tried to kill EJ, who managed to control him until Steve eventually kidnapped Stefano. Steve and Kayla also weathered his kidnapping by Ava Vitali (Tamara Braun). In 2007, the background of the Brady/DiMera feud was revealed through letters from Santo DiMera (James Scott) to Colleen Brady (Alison Sweeney) that revealed details about their forbidden love affair in Galway, Ireland. John, Roman, and Lexie all faced life-threatening situations at the hands of the DiMeras and Tony was revealed to be Andre. John ended up with no memory of his former self and Marlena enlisted the help of the DiMera’s servant, Dr. Rolf (William Utay) to repair his memory disk. Shawn Brady Sr. (Frank Parker) passed away while some of the family was in Ireland and Bo had a failing pancreas. Victor brought Dr. Daniel Jonas (Shawn Christian) to town, who saved Bo with a transplant from Chelsea. Chelsea broke up with her boyfriend Nick (Blake Berris) after developing a crush on Daniel. The ordeal with Bo brought Victor and Caroline closer together. Stefano’s next plot involved a hostage situation on the 7th floor of the hospital but he got away it. John eventually regained his memories of Marlena, although Dr. Charlotte Taylor (Sandra Dee Robinson) tried to prevent it. They married and left for Switzerland. Sami had sex with EJ in exchange for him helping save Lucas’ life after a cave-in. Later she gave birth to twins – Johnny is EJ’s and Alice (Allie) is Lucas’s. Sami ended up in a sham marriage with EJ to end the Brady/DiMera feud. Nick was convicted of killing Trent Robbins (Roscoe Born), who was Melanie Layton’s (Molly Burnett) abusive father and Nicole’s estranged husband. He shared a heartfelt farewell with his ex, Chelsea, as he went to prison. Chelsea was now with Max Brady (Darin Brooks) and they moved to London England. Bo, meanwhile, was having psychic visions and Ciara (Lauren Boles) was kidnapped. Hope and Bo wound up on the outs. Dr. Daniel Jonas had an affair with Chloe, but she married Lucas to honor a promise to God. Kate learned of the affair and poisoned Chloe with brownies. She got off, but had to marry Stefano, which caused Philip to disown her. Justin Kiriakis (Wally Kurth) returned without Adrienne (Judi Evans) and shared a kiss with Hope, but she went through a bi-polar experience due to sleeping pills and started attacking men. Bo helped Carly (Crystal Chappell), who had stabbed her husband Lawrence (Michael Sabatino) and fled to Salem. She told him she had a secret daughter and Vivian (Louise Sorel), seeking revenge for Lawrence’s death, learned it was Melanie.

Though Carly accidentally shot Melanie on her and Philip’s wedding day, they eventually bonded. Vivian then turned her attentions to Maggie (Suzanne Rogers) who had caught Victor’s eye. She attempted to lock her in a sarcophagus but Brady locked up Vivian instead! Vivian did get Maggie in there, but not for long. Sami was in the witness protection program after witnessing a murder and fell for the FBI agent, Rafe Hernandez (Galen Gering). She was pregnant with EJ’s child, which Nicole switched with another baby after she miscarried. Sami went back and forth between Rafe and EJ, until discovering EJ planned to take her kids away and then she shot him in the head. Rafe helped Sami cover it up but his sister Arianna (Lindsay Hartley) got Sami’s confession on tape. She was killed in a hit-and-run and Nicole found the tape. She and EJ used it to keep Sami away from the kids. Nicole was torn between EJ and Brady. It was revealed that Stefano had another son – Will’s (Chandler Massey) friend Chad (Casey Deidrick) with Madeline Petersen Woods (Jessica Tuck), Chloe had a child, Parker, and Stephanie (Shelley Hennig) schemed to change the paternity results as Chloe didn’t know if it was Philip or Daniel’s son. Stephanie’s grandmother, Caroline, switched the results and Parker’s true paternity wasn’t revealed until his christening.