Viewers were surprised and a little disappointed when Days of Our Lives‘ Will showed up at Marlena and John’s apartment sans Sonny. (They were also more than a little baffled when the clan gathered for the below holiday picture and Will, despite having shown up only moments before, wasn’t in it.) 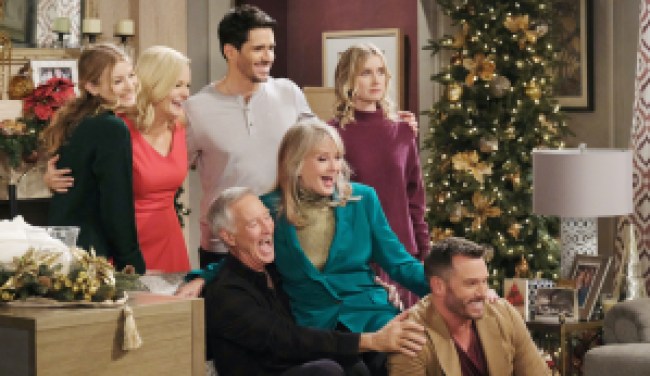 Well, now it can be told: As it turns out, Will was not originally slated to return solo. Freddie Smith (Sonny) revealed during a recent episode of The Freddie & Alyssa Show — the YouTube chatfest he and his fiancée, Alyssa Tabit, host — that back in October, he’d gotten a call asking if he could return for a holiday visit. But as they say, timing is everything.

It seems the couple had just relocated from Los Angeles to Florida when Days of Our Lives reached out about the appearance. “It was one episode,” said Smith in the video, which you can watch in its entirety below. “And we had just driven 40 hours across country.”

Despite the show offering to pay for the flight, the actor reluctantly passed and, as he explained, “I kind of jokingly threw out an idea where I said… ‘I’ll Zoom in if you want.'”

At first, he wasn’t sure how well the idea had gone over. “There was kind of radio silence,” he laughed. “Nobody said anything.”

Soon after, however, came word that the show loved the idea but had decided to have Sonny appear not on Christmas but rather New Year’s Eve.

Tabit incorrectly dubbed the scenes the first of their kind for Days or any other show; as you know, on Thursday, December 24, Alison Sweeney’s Sami will be chatting with daughter Allie in a similar fashion, and several other shows have used the technology to great effect. Nevertheless, Smith was excited about the opportunity.

“If there’s a scene where you’re like making love, you’re in a fistfight or someone’s crying and they drop to their knees and you have to catch them or you’re at the hospital bed or something like that, you obviously need to be there,” he mused.

But for scenes in which it’s just two people talking, he added, it would be easy to simply have people conversing over Zoom. While he did not share details about the actual scenes — “We’ll leave that part a surprise,” he teased — Tabit admitted it was fun to be a fly on the wall and watch her spouse in action.

Look for Smith’s appearance to take place on Wednesday, December 30.

Meanwhile, as we count down to the arrival of 2021, why not take a last look back at all the action that went down in Salem in 2020 with our photo-filled year in review?