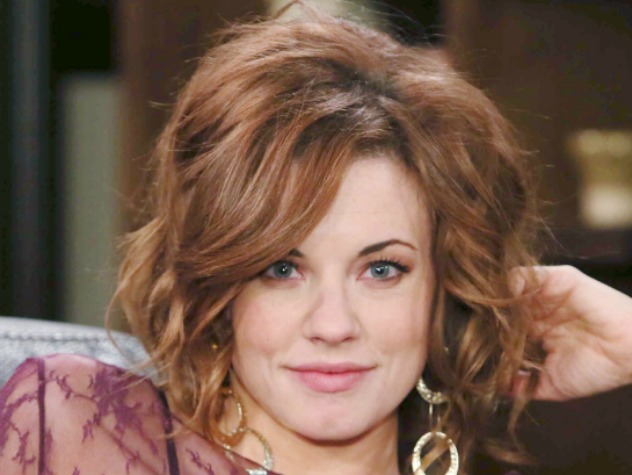 * Met her half brother Max in Marseilles, France
* When Melanie owed 'Les' money, Max paid him and later, Mel stole jewelry to pay Max!
* Arrested for stealing
* Shot by Carly, her mother.
* Married Philip on Valentine's Day 2010
* Still has feelings for Nathan.
* Learned Chloe cheated on her father Daniel before they were married.
* Helped Chloe give birth to baby boy Parker Jonas.
* Learned that Maggie Horton is her biological grandmother.
* Dated Chad DiMera.
* Moved to England to be closer to her mother, Carly.
* Returns to Salem in November 2014 with a big secret.

Who's played Melanie Layton Kiriakis Jonas over the years?

Melanie was a party girl, living in Marseilles, France. She owed a few guys money, and when they came to collect, Max paid them off and Melanie was shocked to learn that the reason he did so was because they're siblings! She gives him a stolen necklace as payment, and was then arrested for stealing. She accused Max of stealing the bracelet, so she could get off. It worked. Max and Stephanie, too, were put in jail. She met Nick, who encouraged her to tell the truth, and once she did, Max and Stephanie were finally let go. She proved to be a handful, due to the horrible way she was brought up and abused. She was told by Trent, her father, to “party with” men in order to clear his gambling debts. She tried, but when she couldn’t do it, the man threatened her and Nick stepped in. The man was sent to jail, and Melanie, Max, Stephanie and Nick went back to Salem.

Melanie and Stephanie didn’t get along. Melanie was difficult and nasty to everyone but Max and maybe Nick. She tried to stay away from her abusive father and in front of witnesses says she wished he were dead. Soon, Trent is murdered and Melanie recalls meeting with him that night, but blacks out just before his murder. She only remembers waking up after, and assumed she may have killed him. She goes to Philip Kiriakis for help in finding the real killer, thinking she couldn’t have done it. When Caroline Brady turns up as suspect number one, Melanie is relieved in a way. Caroline is let go and Nicole and Melanie are both suspects in the case. Nicole is let go and the last suspect seems to be Melanie, but Salem PD detective Hope and new police commissioner Bo, find new evidence that leads to Nick Fallon.

Meanwhile, Melanie moves in with Nick, after receiving a note from an anonymous person who claims they saw her in the cemetery. She leans on him for support and starts getting anonymous phone calls as well. She panics and explains this to Nick, who tells her they’ll go away and hide. She’s reluctant to leave and figures she killed Trent. He tells her she did, lying so that she is kept needy toward him. He took her to a hotel near the airport and says if they marry, they wouldn’t have to testify against each other. Melanie has an epiphany and realizes that Nick killed Trent, and blasts him for letting her take the blame. Nick goes ballistic and when she tries to leave the hotel, he won’t let her. Hope and Bo arrive and Philip and Stephanie, and Nick is taken to jail while Philip saved Melanie from falling off the balcony. Nick is now in jail, awaiting trial for killing Trent and holding Melanie against her will, and Melanie has moved in with Maggie, at Nick’s insistence. She has a job with Titan as a receptionist and is causing issues with Stephanie. She soon lost her job and bummed around a bit looking for work and loving Philip, who was engaged to Stephanie Johnson. She went into nursing at University Hospital. She became friends with Brady Black, Ari Hernandez, and had a brief flirtation with Nathan Horton, but was still in love with Philip. Carly Manning came to town and met Melanie, who hated her on sight. Melanie didn't know that she was her biological mother. They had issues since Carly stepped foot in Salem.

Melanie chose to marry Philip, when Stephanie intercepted a note asking Nathan if he still had feelings for her. If he did, she mightn't have married Philip, but she did. On her wedding day, Carly accidentally shot Melanie, aiming for Vivian Alamain, who wanted to kill Melanie, in order to get back at Carly for killing Lawrence Alamain. Melanie just woke up at the hospital and while she was out, Daniel learned from Carly he was her father. He promptly told Melanie the truth. She reacted very emotionally but since they had already bonded she was happy about the news and they quickly became close. Melanie had a difficult time with forgiving Carly for giving her up but eventually they bonded.

Melanie and Philip moved into Maggie Horton's place and when Philip thought Melanie was going to choose Nathan over him, he turned to Chloe and they had sex. Chloe became pregnant and he learned Daniel was the father, not him. He and Chloe kept their secret from everyone, except many kept learning the truth, which came out in November. Melanie was disgusted with both Philip and Chloe and took the news hard. She and Philip separated and divorced. She realized he wasn't right for her anyway and moved on with Dario. Their relationship barely began when he moved to Argentina to pursue work for Titan. She's single now and learned that Maggie Horton is her biological grandmother and her father's mother.

Melanie recently developed feelings for Chad, though he was dating her best friend, Abby. Melanie and Chad shared a kiss when they were held captive by internet hackers who were bullying Chad, Sonny, and Will in their website venture. Shortly after they were saved, Abby and Chad broke up and Melanie and Chad admitted their feelings to one another. Eventually, Abby got over it and gave them her blessing. Gabi schemed to break them up so she can have Chad for herself.

Melanie was kidnapped by a schizophrenic patient Andrew, who was a photographer for Gabi and Chad. Gabi knew of the kidnapping and Andrew blackmailed her into keeping it to herself, reminding her she now had access to Chad. Gabi said nothing and when Melanie was found, she and Chad were reunited. Nick Fallon returned to town soon after and Chad learned what Gabi did as did Nick. When Chad beat Nick up, Nick agreed not to press charges if Chad wouldn't out Gabi in the kidnapping. Melanie learned eventually what Gabi did and disowned her as a friend and when she heard Chad knew and didn't tell her, she dumped him and moved to Europe to live with her mother. She returned Friday November 21 2014 with a secret.