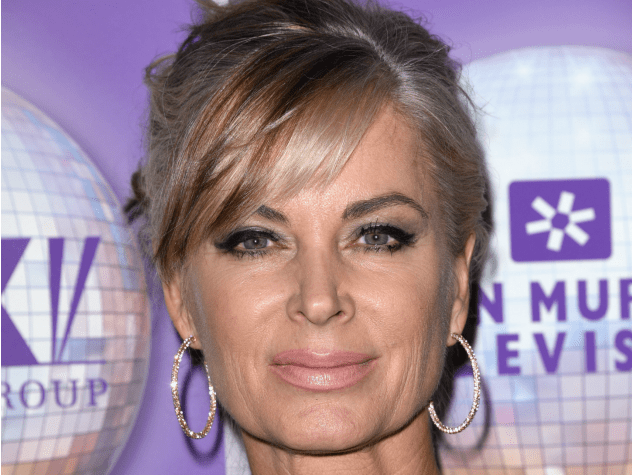 * Helped Stefano kidnap Marlena.
* Bought Susan Banks' baby Elvis to pass off as her own child with John.
* Held Marlena captive in the secret room in the DiMera mansion.
* Helped Stefano erase Laura's memory.
* Tried kidnapping Elvis.
* Was in some harem.
* Returned to Salem to mend the DiMera family.
* Dated and became engaged to Brady Black.
* Drugged and raped Eric Brady.
* Stole Theresa and Brady's embryo.
* Was surrogate to Christopher, Brady and Theresa's child.
* While struggling with Marlena Evans at Kristen's castle in Italy, Kristen fell out of a window and presumably to her death.

Who's played Kristen Blake Black DiMera over the years?

Kristen Blake arrived in Salem in 1993. John Black saved her from a mugging. Her brother, Peter, warned her against seeing John and again he saved her when a sniper fired at John at Salem Place. Alice Horton did some match-making and the duo started dating. John delved into Kristen’s past and found a bloody wedding gown. Kristen revealed she was engaged but someone attempted to murder her fiancé at their wedding. She was holding a big secret that she was Stefano DiMera’s charge and hiding him, because he was suffering from a brain tumor. She swore to Stefano that she’d marry Tony and was set to do so until Marlena’s daughter Belle disappeared. Kristen and John posed as husband and wife to get her back and later learned it was Sami Brady – Belle’s sister who held the child. John and Kristen stayed together until Stefano found Sami’s diary where she had written that John was Belle’s father. Until then it was thought that Roman was her dad but Sami switched the test results. Kristen was to marry Tony, after it appeared as though Stefano killed John and that Stefano was dead.

In 1994, Kristen threw a fundraiser at her childhood home, at Maison Blanche in Aremid and it was there she found John, shackled and alive! She also found out Stefano was alive. When Tony went blind, Kristen slept with John behind his back but refused to leave Tony until she learned he was switching her birth control pills with sugar pills in order to impregnate her against her will. She left him and moved in with John, and when she found out John was a priest, she couldn’t marry him and returned to Tony. A year later, she tried to help John save Marlena from satanic possession. After that, John arranged to be released from his vows, and Kristen annulled her marriage to Tony. Kristen learned she’d soon be infertile so wanted to get pregnant and fast!
As they returned to Aremid for her brother Peter and Jennifer Horton's wedding, Tony arranged to have it look like John killed him. John was arrested and sentenced to the death sentence. He got off. Later, John, Kristen, the Woman in White, and Marlena moved into the DiMera mansion, where Kristen found a love letter from John to Marlena. She hid it and Marlena found it as Kristen discovered her pregnancy. Marlena kept the letter a secret and moved out when John proposed marriage to Kristen.

It was revealed the Woman in White was actually Rachel Blake, her mother. Under hypnosis, John said he loved Marlena more than Kristen and this forced Kristen to have Stefano kidnap Marlena. Stefano kidnapped her and faked a plane crash. Everyone was thought to have perished but Stefano gave John special goggles that he could use to see Marlena when she too used the same ones until Stefano forced them to stop.

At a masked ball, Marlena and Kristen came face to face, and Marlena ran to John. Stefano drugged John, stole Marie Antoinette's crown. Kristen tried to find John to save him from Stefano, and an explosion made everyone believe Stefano and Rachel were dead. Kristen lost her baby, but convinced the doctor to keep his mouth shut. The doctor got back at her by telling John that he and Kristen couldn’t make love. Peter helped by using a device on John to get him to forget and when in bed, John called Marlena’s name.

Stefano appeared again and hired a Kristen look-alike, Susan Banks, and convinced her to get pregnant and sell her baby to him. Marlena started to become convinced that Kristen was not pregnant though Kristen wore a prosthetic. Marlena told Laura her suspicions. Laura caught her adjusting her pad and Stefano and Peter wiped Laura’s memory for the week.

When Susan went into labor, Kristen was there disguised as a nurse. John wanted to marry Kristen before their baby was born so they had no choice but to have the look-alike marry John. Susan handed the baby John Black Jr. over and left town but returned after hearing her child had a heart defect. She wanted the baby back. Kristen refused and Susan started to lose her mind. She started to become convinced John loved her, not Kristen and that she should take over Kristen’s life. She was found with Kristen, who claimed she hired Susan as a nanny. Kristen then had Vivian and Ivan lock Susan in a secret room in the DiMera household, behind their wine rack in the basement and when Marlena learned what was going on with Susan, she was locked in there too. Susan asked for food and when Kristen complied, Susan locked Kristen in the secret room and began impersonating her.

Kristen and Marlena were forced to watch John and Susan together and Kristen tried digging their way out. They hit a gas pipe during the wedding of Susan to John. When Laura confronted Susan and knocked out her false teeth, Susan finally confessed to everything and the ladies in the secret room were saved. Kristen and John almost married when Marlena came clean with everything. Susan took baby John who she called Elvis Jr. after the king himself, because when she thought of who made love to her the night the baby was conceived she saw Elvis. It was actually Stefano, wearing a white jumpsuit!

John moved on with Kristen and during their engagement party at the Penthouse Grill, she became suicidal. Later, she showed up with Roman Brady, who was bandaged up and in a wheelchair, and Marlena could not marry John. Roman was dying but Dr. Rolf, Stefano’s evil doctor friend had a cure. Kristen and John went to find it and returned to Salem with it.

Kristen accidentally infected Celeste, Stefano’s ex, with the disease Roman had. Stefano disowned her and told her that when he got Elvis back she had to stay away from the child. Kristen tricked Susan to sign the child over to her but Stefano and John stole the baby and returned her to Susan who impersonated Kristen in court and said she wanted to return the child to Susan. Afterward, John and Marlena got Susan and Elvis to leave the country to get away from Kristen.

Kristen broke into Marlena's penthouse where she found a fax Susan sent to Marlena. Kristen kidnapped Susan's sister, Sister Mary Moira, and told Susan to come to Salem, and bring the baby. Kristen drugged Susan and sold her to the harem for The Supreme Leader. Susan’s sister Penelope Kent and brother Thomas Banks came to Salem to help their sister. They were quadruplets (all played by Eileen Davidson). Penelope wound up dead in the DiMera pool and the SPD thought she was Kristen. Susan had tipped the police off that Kristen would be at the airport with her baby but when the police got there, they assumed Kristen was Susan! Edmund Crumb showed up there and had Kristen released, thinking she was Susan. She accepted a proposal from him. The coroner ruled "Kristen’s" death an overdose and to corroborate, John found a suicide message from Kristen on an answering machine.

Stefano wound up having a heart attack after blaming Salem for Kristen’s overdose. He apologized to her at the cemetery for the way he cut her out of Elvis’ life and Kristen watched. She revealed she wasn’t the one to die and asked for his help to get her out of the country. When Edmund brought Elvis and Violet to Salem, Kristen tried drugging the woman. Instead, John caught her and thinking she was Susan, brought her to the Penthouse Grill, where Edmund had arranged a surprise wedding. Kristen had to go through with the wedding. Before leaving on her honeymoon, Kristen had one more drastic act. She left chocolates for Marlena from Susan but drugged them with penicillin, knowing Marlena was allergic. Of course, Marlena didn’t eat them - Belle did but Roman saved her.

While on the flight to Bermuda, Edmund admitted he killed Kristen. When they arrived in Bermuda, Susan met them. She escaped the harem and Violet helped her to fly to Bermuda to save Edmund from Kristen. Susan told Edmund that Penelope died, not Kristen. He was beside himself but Penelope was dying so Susan didn’t blame him. Susan arranged payback for Kristen and sent her to the harem, sending her a message later on that John and Marlena were married. Kristen freaked out but she could do nothing but dance for The Supreme Leader. Kristen was not seen since until her return in October 2012 where it is explained that she was in Europe and was in town for business.

Kristen returned to Salem at Stefano's behest, in order to mend the DiMera family. She initially declined but finally agreed and upon her return, became close with her brothers, EJ and Chad. She tried to make amends with John and Marlena. John fell for it but Marlena knew Kristen still hated her. Kristen used Brady Black to get to Marlena but started to fall for him. She went through with her plan to ruin Marlena and with the help of Dr. Chyka, drugged and raped Brady's priest brother, Eric Brady. She decided not to use the evidence to ruin Marlena and somehow it got into Victor Kiriakis' hands. He gave the tape to Marlena, who unwittingly showed it at Kristen's wedding to Brady. It broke the duo up and ruined Brady's relationship with Eric. Kristen fled town before charges could be laid upon her and she returned July 28, 2014 to try to get Brady back. That didn't work and when she learned Theresa Donovan was pregnant with Brady Black's child, she had Dr. Mandrake take the embryo and implant it into her. She gave birth to Christopher offscreen in Italy and Melanie Jonas put the story together and Brady wound up in Italy. Kristen ordered her goon Clint to kill him and had Clint bring Theresa to Italy so that Dr. Mandrake could perform bone marrow transplant on her and the baby who was suffering from an autoimmune disease. Marlena happened along and Kristen's plans were foiled. She sent the baby away and during a struggle with Marlena for her gun, she fell out the window and was presumed dead. When the baby was returned to his parents, the doctors stated that he was in perfect health, not mentioning his illness.

None (Surrogate to Christopher, Theresa and Brady's son.)