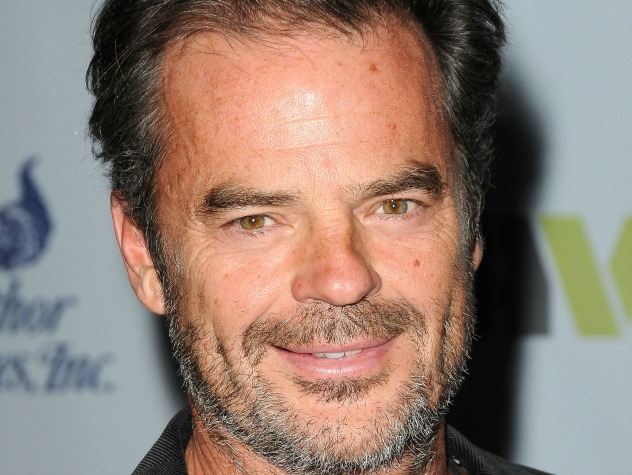 Who's played Justin Kiriakis over the years?

Justin, Victor Kiriakis' nephew, was alone until he moved to Salem. Both parents had passed on and he moved to be with Victor. He met and spent time with Angelica Deveraux for a time, but the love of his life was Adrienne Johnson. They fell in love and married in Greece in 1987. The returned to Salem was not easy, considering his illegal business dealings with the Kiriakis empire. They grew apart after stress caused a miscarriage. Justin tried to leave the Kiriakis family but after Victor was shot, he felt the need to return. Adrienne split up with him and Angelica returned to his life and became pregnant while Adrienne had a fling with Emilio Ramirez. Justin, caught up in the illegal lifestyle, tried to arrange for Emilio to be killed, by having his henchmen cut the breaks on his car, but it turned out Justin was caught in the trap meant for Emilio and who was paralyzed because of it. Justin and Adrienne got back together, moved from the Kiriakis mansion, when Justin learned Victor was trying to kill him and cause impotency. Victor later planned on marrying Angelica and raising Justin's son, knowing how it would kill Justin to have Victor raise his own son. Justin set Angelica up in a fancy hotel suite, and kept her, instead of the alternative, and when Adrienne admitted to Victor that she felt she was losing her husband, she took Victor's advice and faked a pregnancy. She was soon found out and divorced Justin.

The two competed in construction companies that they'd both opened and when Angela learned the two were dating again, she arranged for one of Adrienne's buildings to blow. Adrienne was trapped in one and saved by Justin. Fearing she'd get caught for her dirty deed, Angelica left town with Alexander and were presumed dead. They weren't and had taken another flight out.

Adrienne and Justin became closer and remarried. They had trouble conceiving, so their housekeeper, J.J. Bagwood gave her own twins to them to bring up. The biological father, Stanley, came to claim them, but both J. J. and Stanley realized quickly that Justin and Adrienne could give them a better life. They left town and Adrienne became pregnant! Jackson was born and Justin was reconciled with Alexander, his son with Angelica. They moved to Texas. They returned to Salem in 2007 while Adrienne helped Steve when he was brainwashed by EJ DiMera. She returned to Dubai shortly after. Justin recently returned as a favor to Victor, who needed somebody to take Daniel Jonas' attempted murder case. He got Daniel off and then found himself falling for Hope Brady, who was estranged from Bo. She didn't return the feelings he had for her and instead, knowing he and Adrienne were separated, invited Adrienne to Salem to try to work on their marriage.