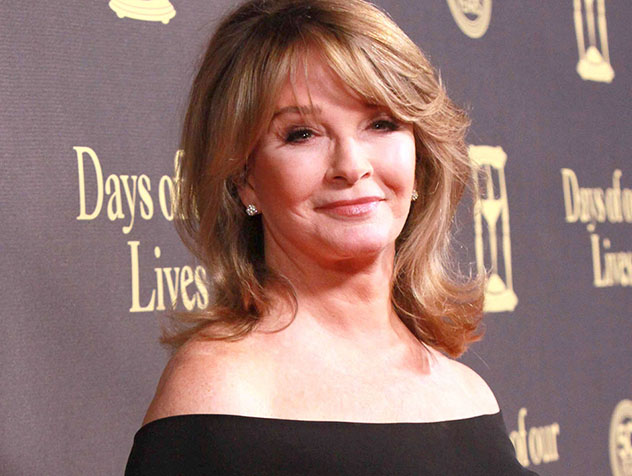 * Hattie is a Marlena look-alike found by Stefano DiMera from August 17, 2000 to June 26, 2001. She was originally played by Andrea Hall, Deidre Hall's twin sister. After her retirement from acting, Deidre took over.
* Worked as a waitress with Fay Walker.
* Tried to commit suicide.
* Got plastic surgery to look more like Marlena.
* Dated Andre DiMera who gave her a fake name.
* Wound up in prison because of Andre.
* Released from prison and worked with Anjelica Deveraux to take over Marlena's life.

Hattie Adams worked with Fay Walker (Nicole Walker's mother) at a diner in Salem August 17, 2000. She was unhappy and mentioned that her psychiatrist, Dr. Higley, was being replaced by Dr. Marlena Evans. She mentioned having a resemblance to her, which was again noticed by Detective Roman Brady who was visiting Fay at work. Roman and Hattie became friendly. Stefano DiMera came across Hattie and he too noticed the similarity and figured he'd cash in on it. He sent Dr. Wilhelm Rolf and Bart Beiderbecke to talk her into getting plastic surgery, hopeful that she'd look identical to Marlena and he could use her against the doctor. When Hattie was fired from her job, she became very depressed and suicidal and tried to jump off a bridge. She was saved by Roman, then after learning more about her new psychiatrist, became jealous of her and with Bart and Rolf's help, she had the plastic surgery. Dr. Rolf taught her how to speak more like Marlena and act lady-like so she could take over Marlena's life which she felt was better. After a while, Rolf was tired of Hattie and complained that she was becoming a liability. He tried to kill her until Stefano ordered him to leave her be.

Hattie was offscreen a time but when she returned in 2004, she looked identical to Marlena and was accused of being a serial killer. Soon, it was learned that Marlena was the killer and murdering Salemites while under hypnosis from Andre DiMera, who had made it appear as if she was killing people when in actuality she was drugging them before he would take them to his island that looked identical to Salem, called Melaswen. Hattie hadn't been seen in years and showed up in prison in November 2016 when Hope was sent to prison for murdering Stefano DiMera. The two got together and Hattie defended Hope with other inmates, stating she was glad that Hope did Stefano in, since she wished him dead for years. Hattie explained to Hope that she was in prison because her boyfriend Alfi in Chicago stole money from the company she worked for as a secretary and framed her for the theft. She took the fall. Hattie helped Hope escape without Hope's knowledge and was beaten and wound up in Brookfield Hospital because of it by Coco and Sheila, two other inmates who hated Hope and were angry that Hattie let her go. Hope later realized Hattie's beau was actually Andre DiMera, and told her. She vowed to help Hattie get out of prison.

Once Hope was free of charges, Hattie wasn't seen for months until she returned summer of 2017 when under Anjelica Deveraux's tutelage, she took over Marlena's life by drugging the doctor and having her committed to Bayview Sanitarium. She helped Anjelica switch Adrienne Kiriakis for Bonnie Lockhart, a dead ringer. While Adrienne was thrown in prison, Bonnie dumped Lucas and Hattie got John Black committed. Bonnie and Hattie were friends from prison and came to be annoyed by Anjelica constantly telling them what to do. Bonnie was forced to dump Lucas though she found him very attractive, and in a moment of weakness, Bonnie wound up in bed with him in Adrienne's room at Salem Inn. He was drunk, having fallen off the wagon after the dumping, but at one point shouted, "Wait. You're not Adrienne." To which Bonnie responded, "What's in a name?" He passed out later when Anjelica and Hattie arrived on the scene and after a lot of arguing between the look-alikes and Anjelica, Anjelica died of a heart attack. The women panicked and moved her to the bed with Lucas and took off.