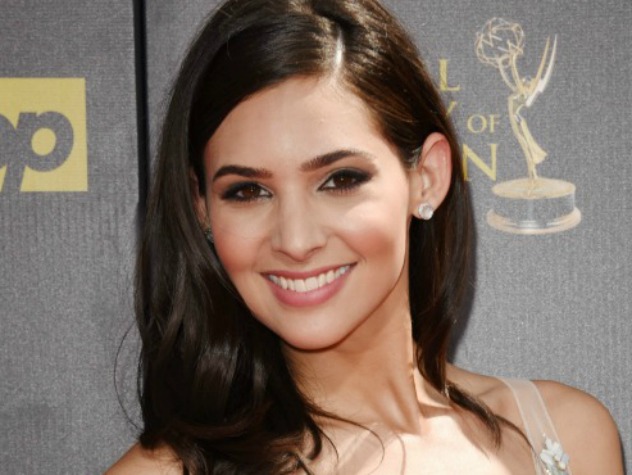 * Youngest Hernandez sister.
* Interested in Chad.
* Mature for her age.
* Works at the pub.
* Dating Will Horton.
* Friends with Will after he came out as gay.
* Became obsessed with Chad when she couldn't have him and hired someone to stalk her in order to get Chad's attention.
* Allowed her stalker to kidnap Melanie.
* Became pregnant with Will Horton's baby.
* Almost aborted her baby.
* Married Nick Fallon
* Divorced Nick Fallon.
* Had baby Arianna with Will Horton.
* Shot and killed Nick Fallon and went to prison.
* Got out of prison and tried to move on with her life.
* Became a Buyer and runs own business buying clothing and dressing clients
* Owner of Gabi Chic

Who's played Gabriella (Gabi) Hernandez Fallon over the years?

Gabriella came to Salem on November 20, 2009 as the younger sister of Rafe and Arianna Hernandez. She was visiting for Thanksgiving, originally, but decided to stay and transfer to Salem High. She resides over the pub, where Arianna lives and also works at the pub as a waitress. Gabi started at Salem High with befriending Will Horton and Chad Woods Peterson. She had a few run-ins with Mia McCormick and Kinsey, who were jealous of her. She has taken a liking to Chad, who was interested in her but dumped her before they could date, due to Mia's influence. Gabi spends her days at school and works at the pub. She and Will dated for a while until Will came out as being gay. They stayed friends but broke up and she started obsessing about Chad, who wasn't into her but in a relationship with Melanie. Gabi and Chad started modeling together at Countess Wilhelmina while Gabi worked at the spa. Gabi wanted to get Chad's attention on her, so she hired one of their photographers, Andrew, to "stalk" her. Andrew kidnapped Melanie and when Gabi found out, she urged him to let her go. He refused and blackmailed Gabi into keeping quiet. She did but eventually, Andrew was caught and Gabi's secret came out. Chad learned that Gabi knew the whole time about the kidnapping and vowed to make her pay. Melanie learned that Chad knew about all of this before she did and kept it from her so she could no longer trust him and left for Europe. Chad vowed Gabi would pay. One night when she and Will were at their lowest, they had sex. They both agreed it was a one off and since, Gabi has been dating Nick Fallon, who just got out of prison. Gabi learned she is pregnant with Will's child and went to get an abortion but both she and Will didn't want to go through with it. Everyone thinks Nick's the father but Nick thinks it's Chad. The truth came out that Will was the father and Nick offered to marry Gabi and raise the kid as his own. Will reluctantly agreed but could see that Nick was anti-gay and had issues with that. When it came out at their wedding, the wedding was postponed. Nick's been trying to find ways to claim Will is an unfit parent, so he can be the sole father of Gabi's daughter. He was able to get a hold of a device used to wiretap Will, and learned Will shot EJ all those years ago. He blackmailed him with this and had him sign a document giving up his rights to the child just before he and Gabi married in a ceremony at the Horton house. The couple married and eventually divorced when Gabi learned what Nick did to Will and they tried to remain friends. Gabi gave birth to Arianna Grace at some shed on Smith Island and Sonny helped. She moved in with Sonny and Will and had sex with Nick when feeling lonely one day. When the guys found out they had it out. She realized she didn't want to be with Nick after all and dumped him. Nick tried getting back into her good graces and got her a job modelling in New York. He planned on moving there himself. Gabi decided not to take the job, preferring to stay with her little family, and this pushed Nick's buttons. She learned he was the one to set the job up and they argued publicly. She walked away and he followed. He tried to rape her but she fought and hit him in the head with a rock. He fell unconscious as Kate and Sami came upon her. Sami assumed he was dead so she and Kate forced Gabi to help throw him into the river, against her better judgement. Nick was alive and yelled for help but they let him die. He never died and they kept their secret, even though a birdwatcher, Percy Ruggles, saw them the night of the "murder." It was later learned that Percy dragged Nick from the river and unwittingly helped him to take revenge on the trio. Gabi felt out of control and blackmailed into dating him again and she couldn't take it anymore. She shot and killed Nick. She wound up in prison for 12 years and Arianna now lives with her father and step-father, Sonny.

Arianna Grace (with Will Horton)