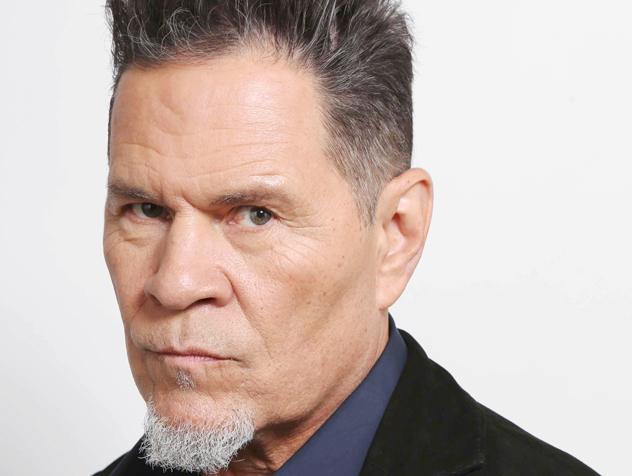 Eduardo Hernandez (as played by A. Martinez on Days of Our Lives)

* Known as Eddie Larson when married to Eve Larson.
* Had a child with Eve, Paige Larson. He walked out on them when Paige was 10.
* Abandoned the Hernandez children years before.
* Offered $100,000 for capture of Chad DiMera, then thought to be the Necktie Killer.
* Dated Kate Roberts.
* Went to Winterthorne Academy with John Black. They worked together to try take down the organization.
* Helped John find his birth mother.
* Took a bullet for Rafe. He survived.
* Bought TBD from Sonny.
* Did some shady deals and wound up in prison.

Who's played Eduardo Hernandez over the years?

Eduardo Hernandez first arrived in Salem on September 21, 2015 not long after his daughter Paige Larson was murdered by the Necktie Killer. His ex-wife Eve Larson was furious at Eduardo for showing his face after walking out on his family when Paige was just 10 years old. Eduardo wanted to learn more about Paige and Eve gave him a box of photos and mementos to go through.

Eduardo was confronted by Rafe Hernandez and it became clear he was also the absentee father of the Hernandez family. Eduardo wanted to get to know Rafe and his sister Gabi but Rafe angrily refused. Eduardo asked if Rafe let his siblings Gabi and Dario know he tried to reach out after their sister Arianna died but Rafe did not. Eve witnessed Rafe and Eduardo argue and was shocked he had left two families in the lurch – not to mention devastated that Paige did not get to know her brother Rafe.

At Paige’s funeral Eduardo told Rafe he wanted to find her killer. Rafe refused his help so Eduardo held a press conference offering $100,000 to anyone who helped capture Chad DiMera, then suspected of the crime. This angered Rafe and DA Justin Kiriakis but touched Eve. Eduardo also helped set up a music program in Paige’s name at Salem University for Eve to run, and began to bond with Kate Roberts. And when Rafe finally told Gabi that Eduardo was their father she chose to get to know him.

Just as Eduardo was settling into Salem his past came back to haunt him. A trained assassin, he was instructed to kill again but refused. John Black then came to Eduardo with questions about a place they both had in common, Winterthorne Academy. Eduardo told John the truth – that the school was really a training ground for assassins. Eduardo also helped John locate his birth mother.

When Kate broke things off with Eduardo for Deimos Kiriakis, Eduardo looked into the man’s life and learned he had connections with Ilya Petrov, the same man who brought John to Salem. John had thought Petrov was long dead and they both knew their families were in danger unless they took down the organization themselves. When Marlena Evans and baby Arianna were kidnapped by the organization they made plan to rescue them. Rafe found out and insisted on helping.

Eduardo and John were forced to drink something laced with drugs, and once Marlena and Ari were safe, they engaged in a shootout with the assassins. Eduardo saw that Rafe was in one of the gunman’s sights and jumped in front of him, taking the bullet meant for his son. Eduardo survived but was in serious condition. Afterward, Rafe started to warm up to him. Dario visited Eduardo in the hospital but was very bitter about his father being in Salem and asked him to leave. Adriana, Eduardo's ex-wife, found him with her children and was shocked and angry that he had returned and this was the first she was hearing of it. Eddie was about to leave Salem when Gabi convinced him to stay. He and Adriana seemed to be picking up where they left off and got close but when she realized he still had secrets about his past, and was involved with sketchy business. She couldn't risk it and left Salem, so eventually, Eddie set his sights on Kate, while he bought TBD from Sonny. He and Dario tried to patch up their relationship and turned it into a front for another underground business and went up against the Kiriakis and DiMera clans. He lost when Deimos set him up and Rafe found him buying US Bearer Bonds illegally. Rafe arrested him and he was sent to a federal prison in Chicago.