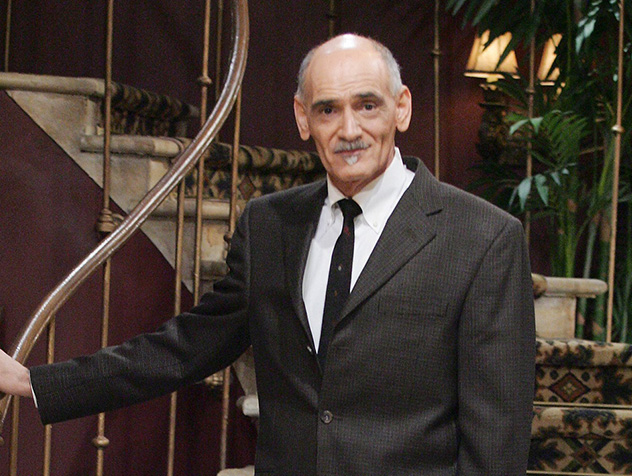 Dr. Wilhelm Rolf (as played by William Utay on Days of Our Lives)

* Rolf is not just your average henchman,he's a doctor, dentist, plastic surgeon, etc.
* Works mainly with Bart Beiderbecke, Tony Dimera and Stefano DiMera.
* Has been presumed dead since 2003 after a crate fell on his head at the docks in Salem on June 10 2003.
* Returned to Salem with Stefano
* Was forced to serve John Black for a short period of time when John tried to re-claim the DiMera empire
* Residence is at the DiMera mansion.
* Was thought to be dead but turned up in Statesville prison where he told Clyde Weston that Will Horton was alive.

Who's played Dr. Wilhelm Rolf over the years?

Dr. Wilhelm Rolf was introduced to the show in 1997, when John, Hope Stefano and Kristen traveled to Stefano's jungle compound, where Rolf was creating a cure for Roman Brady, who had been poisoned. They had to work quickly, and during their time in the compound, Hope kept having memories of being Princess Gina. It ended up that once made, the cure was lost and John and Hope had to bear the jungle a while longer in order to get an orchid for another cure. A cure was made and Roman was fine.

Rolf had worked for Stefano and the DiMeras many times, but was rarely seen by most of the other Salemites. He worked with Bart, who was a henchman for the DiMeras and who did Rolf's bidding as well. Rolf had helped create the secret room with which to hold crazy Susan, but ended up holding Marlena and Kristen when Susan locked the two in! Rolf is a surgeon and a biochemist, among other things, he's a dentist and a plastic surgeon.

Dr. Rolf's family was shown when his niece Marlo, the alcoholic was pregnant and came to town. Rolf convinced Marlo to give her child up to Lexi and Abe Carver when they couldn't have kids of their own. Stefano of course had a plan to switch Marlo and Hope Brady's child when they both gave birth so he could find out if Hope's child was his or Bo's baby. (For when she was Princess Gina, they'd been intimate.) Marlo ruined the plan and during an argument with her uncle, she fell down the stairs of the DiMera mansion and broke her neck. The babies were switched and later on Stefano was found out!

Rolf had a hand in turning Hope into Princess Gina the few times it happened, and during the last time he tried to switch her mind, he almost killed Barb Reiber, Glen Reiber's wife.

Rolf created the Gemini twins, with Kate and Roman's egg and sperm and they were brought to Salem in pods, containing teenage twins, Rex and Cassie. The twins were programmed to kill anyone who came near the DiMeras, but later we found out that Rex and Cassie's parents were not Tony and Marlena but Kate and Roman, as Stefano tried to make them believe.

Rolf became a bioethics professor at Salem U in order to keep an eye on the Gemini twins and before Roman could get this out of the evil Dr.Rolf, he perished when a crate at the docks fell on him.

With Stefano DiMera's return to Salem, Rolf also returned to help Stefano cause trouble. It turned out he didn't die after the crate fell on him. When John Black was presumed dead after he was struck and killed by a hit-and-run driver, Rolf worked with Stefano to re-program John to complete a new "mission." He also tried to kill Sami by poisoning her, though EJ saved her life.

Rolf stayed by Stefano's side until Stefano was injected with a drug that left him to vegetate in a catatonic state. When John Black discovered that he was a DiMera, he claimed the DiMera estate and made Rolf his butler. To his dismay, Rolf could no longer perform any science experiments, but was reduced to a butler, babysitter, and cook. Marlena sought after Rolf's help to fix a disk that held John's memories, insisting that Rolf knew how to get the old John back, but Rolf refused because he feared for his own life.

Rolf was pleased when Stefano came out of his coma and reclaimed his empire. He continued to serve Stefano in his missions.

Dr. Rolf returned on the scene in October of 2017 after getting word to Clyde Weston while he was an inmate at Statesville prison that he brought Will Horton back to life.