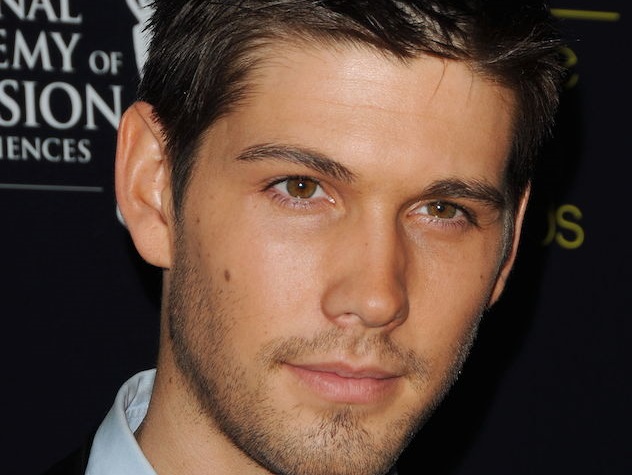 * Mia's ex-boyfriend.
* Father of Grace.
* October 15, 2009, Chad's name was changed from Chad Peterson to Chad Peterson Woods.
* DA Woods is his father.
* Kate and Madeline Woods Peterson were prostitutes together.
* Chad's mother died and his father left town after.
* Turns out Stefano DiMera is his father with Madeline Woods.
* Changed his last name to DiMera only to work at Cheatin' Heart. (His birth certificate names him a year older than he thought he was.)
* Chad celebrated his new birthday March 3, which is the date on his birth certificate.
* Dated Abigail Deveraux, and is then her best friend, Melanie Jonas.
* Proposed marriage to Melanie, who turned him down.
* Dated Abigail Deveraux.
* Left town and moved to Chicago.

Who's played Chad Peterson Woods DiMera (Past) over the years?

Chad showed up at Java Cafe, where Mia was working. She was shocked to see him. Chad doesn't know Mia had his baby. Neither of them know that the child is not Sydney, like Mia thinks, but little Grace, who passed away from bacterial meningitis. As his portrayer has stated, "Chad Peterson has trouble written all over him, yet I believe he means well. There's a part of him that you hate, and love at the same time. He's a very confident, edgy, mysterious person. He's the type of person that can persuade you by his words. It's tough to break him, it seems like he's seen and been through a lot in the past...maybe a rough history with his parents, or abandonment issues. He will definitely bring out a side of Mia (Taylor Spreitler) that no one has ever seen before. The love triangle between Will/Mia/Chad is getting intense."

Chad has been marking his territory around Mia and is at odds with Will, who is close with Mia. Chad has found out that Mia went to rehab while he was away, but knowing her as he does, he doesn't believe it and wonders what she's hiding. When he tried to find the truth out, Nicole beat him to it and threatened him and his family. Chad eventually learned that Grace was his child but it wasn't until after she died.

When Will learned Chad's mother was a prostitute, he told Chad about it and Chad confronted his mother at the pier. She was trying to discuss it with him when he shook her hand off of him. She promptly fell down the stairs and died. Lexi discovered she would have died anyway because her death stemmed from an aneurysm not the fall. Chad's father blamed his son anyway and left town for work. Chad's in Salem alone now and Kate has learned from Madeline that Chad's father is really not the DA but Stefano DiMera. Kate's trying to get him a job at DiMera industries as an intern but he turned it down. Recently, Kate sent him his birth certificate so he could decide what to do with this knowledge that Stefano's his dad. Chad received the certificate and went to Stefano with the news. A DNA test confirmed that they're father and son and while Stefano wants his son to move into the manse and accept money to pay for school, Chad has turned his back on the family. It took him a while to come to grips with this news and when he did he eventually moved into the mansion, where he now resides and has grown to love Stefano.

Chad began dating Abigail Deveraux and enrolled in Salem University where he also worked on an online business venture with Will Horton and Sonny Kiriakis. During Halloween, Chad accidentally kissed Melanie Jonas as she was dressed in the same Halloween costume as Abby. Abby caught them kissing, but they both insisted it was an innocent mistake. Later, hackers got hold of Chad and Will’s site so they shut it down. The hackers ended up kidnapping Melanie and Chad, who had developed feelings for each other but stayed quiet because of Abby. While they were held captive, Melanie and Chad admitted their feelings and shared another steamy kiss, thinking that they weren’t going to make it. They were eventually saved but kept their feelings a secret. Chad and Abby later decided to break up because things didn’t feel right anymore. Meanwhile, Abby actually broke up with Chad because she had feelings for Austin Reed. Chad and Melanie ended up kissing again and Abby caught them. Though she was angry about it, she eventually forgave both of them and gave them her blessing to start a relationship. Chad continued to pursue Melanie. They wound up dating and were happy for a time until Gabi faked having a stalker in order to get Chad's attention. Gabi did what she could to try breaking Chad and Mel up but finally succeeded when she learned that the guy she hired to be her stalker, Andrew, had kidnapped Melanie, unknowingly. Gabi didn't like it and tried to save Melanie but Andrew blackmailed her into silence. Chad learned the truth when Melanie was found and kept quiet for Gabi's sake since she and Melanie were friends. When Melanie learned the truth, she left Chad and moved to Europe to be with her mother Carly and Chad moved on. He and Sonny opened a cafe, and he beat up Nick Fallon when he got out of prison - over how he loathed Gabi for what she did. When Chad beat him over his bitterness toward Gabi for allowing Melanie to be kidnapped by Andrew, each was in danger of going to jail. They decided to keep it quiet with the help of Justin, who drew up documents stating if either mentioned it, Nick could go back to prison because he was still a parolee and Chad could wind up in jail for battery. Chad learned that Gabi was pregnant with someone other than Nick's child and outed her at their wedding. He ruined his chances at a possible reunion with Abigail and harmed his friendship with Will and Sonny when it was learned that Will was the baby daddy and hiding the truth. Chad felt awful and apologized, Will forgave him but he and Abby were through. He sought support from EJ and Kristen, his siblings. They helped him get through and he moved into the DiMera mansion but during Sami and EJ's wedding engagement, he was shot and wound up in the hospital. He was taken to Chicago for rehab and decided to stay there.