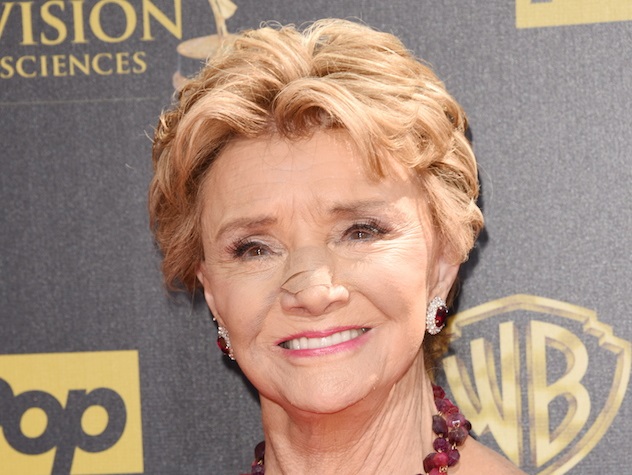 * Owns the Brady Pub
* Married to Shawn Brady Sr. "Pop" until his death 2008.
* Lives above the pub
* Mother and Grandmother
* Used to date Victor Kiriakis
* Was arrested for Dean Trent Robbins' murder, but was later cleared of the charges
* Was involved with Parker Kiriakis' paternity mix-up when she found out about Chloe's affair with Philip.

Who's played Caroline Brady over the years?

Caroline married Shawn Brady and had three children with him, Roman, Kimberly and Kayla. They owned the Brady Pub, The Brady Fish Market and the Brady Junkyard! When her last born, Kayla was just a tot, Caroline had an affair with Victor Kiriakis, and wound up pregnant with Bo. She passed Bo off as Shawn's child, and they adopted Frankie and Max.

Victor found Caroline once again and tried to get her back. She stayed with Shawn, and Victor seduced her daughter, Kimberly. He also tried to get back at her by opening his own fish market - and sabotaging theirs.

Kimberly became pregnant and Victor tried to gain custody of little Andrew. A cop, Bo had been working on getting Victor jailed as a drug and crime lord. He almost shot him, so Caroline let the truth out that Victor was Bo's father. Bo saw that Caroline was troubled with Victor consistently so in order to save her the pain of being on Victor's bad side, he elected to allow Victor to be his father, openly. Victor was happy with this but Bo hated the man. Eventually, Victor faked that he'd had a vasectomy in order to allow Bo to think that he was Shawn's son.

Caroline is a good mother. After Kayla ended up in jail for the murder of Marina Toscano (she didn't do it), she tried to take the fall for Kayla but when it didn't work, Kayla was sent to prison, where she gave birth to Stephanie.

Caroline and Shawn met Dr. Carly Manning and after Hope 'died', her son Bo took comfort in Carly's arms. Shawn and Caroline went to see Kimberly in California and upon their return they found that Kayla was widowed and involved with Shane Donovan (Kim's ex). Kimberly was involved with Lawrence Alamain. Caroline was incensed, considering both men were horrible. Eventually the girls figured things out and the relationships were short lived.

Caroline had a heart attack after Sami came home pregnant from Colorado. It was around this time that they found out that Marlena's daughter Belle was fathered by John Black, not Roma.

Caroline is always there for the family and helped Marlena through her possession of the devil and helped Sami when she was arrested for Franco Kelly's murder.

When the Salem Stalker storyline came out, Caroline was poisoned by the Salem Stalker the day of Abe, Jack, and Maggie's wake. She 'died' during the church wake, but was found later on Tony DiMera's island, Melaswen.

After she was held with Victor, at a castle in Europe, believed to be dead, she was rescued shortly thereafter and continues to be there for her family. She was recently happy to find she has a granddaughter in Claire, from Shawn D and Belle yet devastated to learn about grandson Zack's death. She also found that Bo had a child all those years ago with Billie and is having issues with getting Chelsea to become the sweet girl she would like to see in Chelsea.

Caroline also recently almost lost Kayla due to a poisoning by EJ Wells, but Kayla is fine now.

Shawn Brady, Caroline's husband, died when Ava Vitali had her goons sabotage a plane that Steve Johnson was on.

Caroline continued running the pub with the help of her son, Max, who learned that his biological father was the Salem University Dean, Trent Robbins. Max discovered his long lost sister, Melanie Layton, in France, and returned with her to Salem. Caroline feared Max's rage towards Trent and warned Trent to stay away from Max. Caroline continued to fight with Trent, who repeatedly came to the pub and caused trouble.

While Caroline visited Shawn's grave at St. Luke's cemetery, Trent approached her, and Caroline saw that he was stabbed. Trent died as he stumbled towards her and Caroline was arrested at the scene of the crime.

Now that Nicole is imprisoned for Trent's murder, the charges against Caroline have been dropped. Caroline spends her time working at her pub and taking care of her granddaughter, Ciara. She isn't seen consistently.

Caroline and Victor Kiriakis spent some time together with Victor trying to court the Brady matriarch. Though she was interested and touched, she couldn't abide by the type of business Victor was into. He moved on to Maggie. When Caroline learned that Chloe was pregnant with Philip Kiriakis' baby, she changed the test results to show Parker was Daniel's baby. She didn't want the child to be brought up a Kiriakis.

Despite Caroline’s efforts, the truth about Parker’s paternity came out during Parker’s christening and everyone learned Parker was Philip's baby.

Caroline recently celebrated the renovation and opening of the Horton Town Square and is happy to see Hope and Bo back together. She does not appear on screen much but does babysit her grandchildren off-screen often.

Caroline had Alzheimer's disease and Kimberly took her to California for treatment in 2016 but Caroline never returned. She passed away a few years later June 19, 2019.