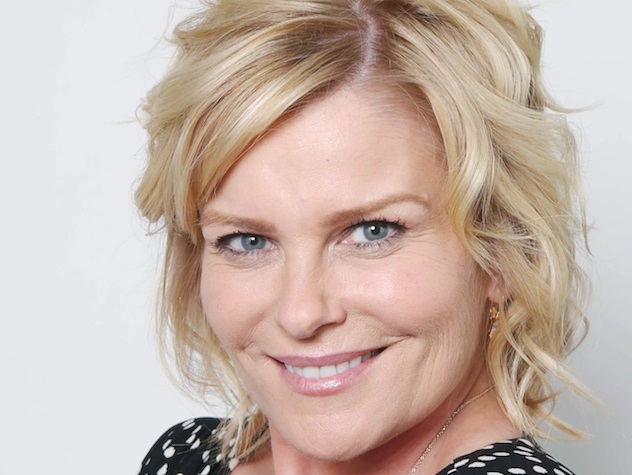 * Killed father Duke Johnson after he raped her.
* Has three kids.
* Is married to Justin Kiriakis.
* Was Co-Owner of AJ Construction.
* Moved to Salem from Texas.
* Owned and ran Cheatin' Heart but when Justin got a job in Dubai, she and the kids packed up and left with him.
* Left the bar with Max to take care of until she figures out what to do with it.
* Left town with family in 2008.
* Returned to Salem when her marriage to Justin went sour.
* Owns Cheatin' Heart still.
* Recently got back together with Justin in 2011.
* Married Justin off screen April 2011.
* Gets overtly involved in her son Sonny's life at times.
* Didn't like Sonny dating Will Horton but came around after a while.
* When Justin went to Dubai on business she thought he was cheating.
* Had an affair with Lucas Horton, and got engaged.
* Contracted breast cancer, had a mastectomy and reconstruction.
* Sebastian Howard bought out The Spectator that she and Jennifer Horton owned.

Who's played Adrienne Johnson Kiriakis over the years?

Adrienne Johnson ran away from home after she was abused by her father, Duke Johnson. She moved in with Kayla Johnson, who was her brother Steve's girlfriend. Father Duke followed Adrienne to Salem and abused her and raped her before she shot him dead. She blocked the memory and Steve took the murder rap. Steve was almost sentenced when Adrienne remembered the shooting and the judge let Steve go and exonerated Adrienne because the killing was in self-defense.

Adrienne met Justin Kiriakis, and the two married in 1987, in Greece! The marriage wasn't an easy one. The two fought over Justin's ties with the Kiriakis business. She miscarried a child and a strained relationship became worse. When Victor (Justin's uncle) was shot, he moved in to take care of Victor and run the Kiriakis Company. Adrienne didn't return and had an affair with stable boy, Emilio Ramirez. Justin set a trap for Emilio to be killed but Justin became paralyzed after being caught in his own trap! Adrienne returned to Justin's arms but the tensions were high when Justin became impotent. The two divorced after Adrienne faked a pregnancy in order to keep Justin. At the same time, they found that Victor was drugging Justin to make him impotent.

Justin and Victor fought over Angelica, who planned to marry Victor but had Justin's baby.

Justin and Adrienne continued to work at competing companies, and eventually dated once more, and remarried June 1, 1990. Angela became upset with this and tried to kill Adrienne. When it didn't work, she fled Salem. Presumed dead, she is still out there with her son, Alexander.

Justin and Adrienne were having problems conceiving, so they adopted Justin and Adrienne, who were born September 19, 1990. Shortly after the twins were born, Adrienne became pregnant with Jackson. They made up with Victor and moved to Texas where they started A.J. Construction Company.

In 2003 Adrienne called Jennifer to give her condolences when Jack 'died'.

Adrienne came back to Salem in May 2007 to help her brother Steve get out of the mental hospital. She stuck around and often helps Steve with Stephanie. She also owns the Cheatin' Heart.

Not seen often on this return, she, Justin and the kids took off to Dubai when Justin received a great job promotion there. She left January 31st with a tearful goodbye to brother Steve. She returned March 23 2010 when Hope contacted her and asked that she return, secretly hoping to get Adrienne and Justin back together as they'd been separated. It didn't work, and Adrienne sold Cheatin' Heart. She remains in town for now, providing a shoulder to lean on when Stephanie Johnson needs one and she and Justin have been reflecting on their past and heading toward a future together. They recently got close and had sex at Cheatin' Heart during "Happy Hour" and are reconciling.

Adrienne and Justin became engaged to marry for the third time, March 2011 and married April of 2011 offscreen. Jackson (Sonny) returned in July of 2011. Since, she has not been seen much, though she and Justin's relationship has been very good.

Justin and Adrienne remarried Tuesday November 5, 2019 in a double wedding ceremony with Jennifer and Jack after Jack got his memory back. With the Days of our Lives time jump that began November 8, Adrienne was revealed to have died at Will Horton's hand.