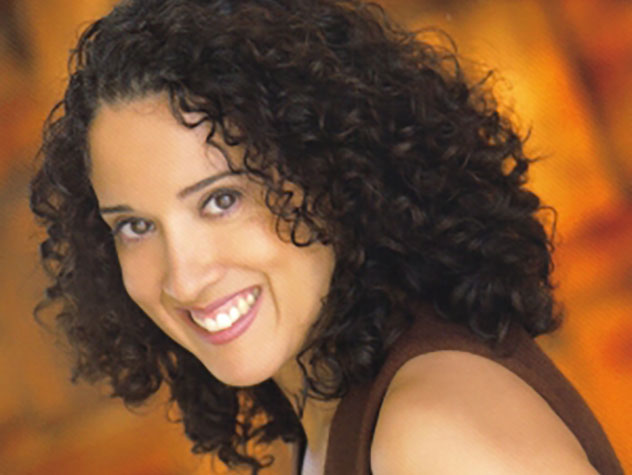 Eileen Galindo (Beverly Healy on Days of Our Lives)

When Eileen Galindo moved from New York to Los Angeles in 2000 to reprise her role in the award-winning play Expecting Isabel at the Mark Taper Forum, she had no idea what to expect. Initially in the City of Angels for a three month run of the play, seven years later, Eileen is still waiting to go home! As fate would have it, a series of TV, Stage and Film projects have kept her continuously employed. Unpredictable and unbelievable, a story like Galindo's should always be told:

There is no such thing as competition in acting, claims the talented actress with unblinking eyes that sparkle golden brown. Actors are like fruit, they come in different shape, size and flavor. Auditioning is the art of convincing the casting director that you are the right fruit for the basket he or she is putting together it's a matter of either suiting or enticing someone's appetite, she proceeds to say. 'You have to know who you are before you throw yourself into that fruit basket, otherwise you may end up a basket case, she humors. Eileen lets that thought simmer and eyeballs you with a catch my drift stare that solidly affirms that she made up her mind long ago who she was going to be. And yes, Eileen is not just anybody. She is someone absolutely worth knowing, and someone everyone wants to know! She's been called the Oprah Winfrey of her own social circles for her exponentially growing entourage - sort of a six degree of Galindo phenomenon.

Here is how the genealogical riddle initiated:

1. Lisa Loomer (Girl Interrupted) casts Eileen in her play Expecting Isabel, first in New York then in Los Angeles.
2. While in LA to perform the play, Eileen secures a recurring role on the TV show That's Life opposite Debi Mazar, and befriends the latter.
3. A premiere party for the sitcom is thrown and hosted at Tommy Hilfiger in Beverly Hills. As the night was winding down Debi invites a select number of close friends to carry on the party at the now defunct Sunset Room. Eileen obliges and finds herself hanging out with the hubs of Hollywood including Madonna.
4. A few months later, Lisa Loomer is granted the Norman Lear Award at the Imagen Gala and invites Eileen to attend the festivities.
5. Eileen is now socializing and befriending the creme de la creme of the Latin entertainment world. Basking in the blaze of the lifestyle of the rich and famous, Eileen was temporarily duped into believing that this was the standard and normal Hollywood zeitgeist for any actor new to Los Angeles.
6. Of course it doesn't help to convince her otherwise when a few months later a friend invites her to the Golden Globes.
7. And then there's the time Eileen invites her neighbor and friend, actress Vanessa Aspillaga, who is performing in the Pulitzer Prize winning play Anna and the Tropics, to come over for a drink after the show and ends up greeting in her pajamas not just Vanessa, but her co-star Jimmy Smits.

Yet in spite of it all, Eileen always remained down to earth. She has built an impressive acting resume one credit at a time and most of the time through her connections.

Born in Bronx, NY, Eileen enjoys quite an eclectic background: her father is Puerto Rican and her mother, although born in NY, comes from a mix of Cuban and Spanish blend. Her mother's family stepped foot in the US in 1868 following the tobacco trade as cigar workers, first in Key West, then finally settling in Ybor City (Tampa), Florida. Strongly connected to her Latin heritage, Eileen made it a priority very early on to learn Spanish (which, of course, she speaks fluently). She strangely caught the acting bug at age fourteen after attending a Liza Minnelli concert, but would have to wait five more years before booking her first professional jobs: the roles of Diana Morales in A Chorus Line, and Anita in West Side Story, both summer theatre contracts. She has since been involved in several award winning projects including Newton's Apple (Emmy Winner), Dora The Explorer (Emmy, Imagen Award Winner), Doubleparked (Slamdance Award Winner), The House of Bernarda Alba opposite the legendary Chita Rivera, and the critically acclaimed world premiere of Chavez Ravine with Culture Clash (Mark Taper Forum).

Of course she was not immune to the series of odd jobs inherent to every actor's fate (like the time she was working as a showgirl on Royal Caribbean Cruise Lines), nor to the accidental casualties of shooting (she was upgraded from extra to an under-five playing a nurse on One Life To Live and upon putting on the latex gloves saw her hands blow up like balloons and her breathing become labored not the best way to find out one's allergic to latex!).

Armed with a great sense of humor, she is also equally blessed with a big heart and an insatiable dedication to causes she strongly believes in. She found herself on the pages of the LA Times not just for an acting review but for her charitable endeavors following the Katrina disaster. Owner of a 5-unit building in Hollywood, California, Eileen generously housed a young couple with their newborn (Katrina evacuees) for three months rent free. She sent out a mass e-mail asking for donations of blankets, food, clothes, etc. and somehow found herself mentioned on Hollywood's members-only, highly prestigious, elite internet newsletter dubbed The List. The outcome was car loads of pret-a-porter designer brands from the finest boutiques on Rodeo Drive and Robertson Blvd, snazzy furniture, gift cards and boxes of gourmet delicacies. On the political front, she served as a board member of the Screen Actor's Guild for three years. At only twenty one years of age, Eileen became instrumental in the non-traditional casting movement that gained momentum in the 1990s, putting herself on the picket lines to encourage Broadway producers to endorse diversity in casting. As a result, today Broadway is certainly more integrated.

Now Eileen is rightfully reaping the seeds of a well deserved success. The talented charismatic actress was just added to the cast of NBC's "Days of our Lives " playing the role of the nefarious "Beverly Healy". She also secured the role of the "Nurse" in Tony Plana's ("Ugly Betty") adaptation "Zoot Suit Romeo and Juliet". The company is the East LA Classic Theatre, a company dedicated to bringing the Classics to students. The show is performed at the Los Angeles Theatre Center (LATC) in Downtown LA, with a prestigious cast including Ana Ortiz ("Ugly Betty"), Marlene Forte ("Adrift in Manhattan"-Sundance 07) and Mauricio Mendoza ("Resurrection Blvd"). Currently on hiatus the play will resume in Mid-February 2007. Another upcoming project is "Phineas and Ferb" the new Disney Channel animated comedy by the creators of "Hey Arnold" and "Sponge Bob Square Pants", set to air in the summer of 2007 in which Eileen secured a voice-over appearance opposite Caroline Rhea and Mitchel Musso. To date, her television credits include CBS "That's Life", ABC "NYPD Blue", NBC "ER" and Lifetime "Strong Medicine", to name a few. As for her big screen ventures, the list includes "The Super" opposite Joe Pesci, "Row Your Boat" opposite Jon Bon Jovi, and "Exiles in New York" written and directed by Eduardo Machado.