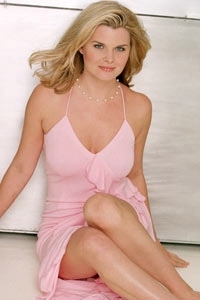 The Bold and the Beautiful's Heather Tom (Katie Logan) will replace Katherine Kelly Lang (Brooke Logan) as a presenter.

All the Daytime Emmy presenters are in, and although we have given you a few in previous updates below, here's the list in full!

So there you have it, Soaps.com readers, the 2009 Daytime Emmy Award Presenters!

One Life to Live's Kristen Alderson (Starr Manning) and Brandon Buddy (Cole Thornhart) will be presenting this year! Kristen tweeted:

"I heard that everyone found out Bran & I are presenting at the Emmys! YEPP it's true! I'm superrr excited!"

Stay tuned for more presenters as they are released!

Although the full list of presenters has not yet been released, Emmy Producer Jim Romanovich has teased that a couple of General Hospital actors will be lined up to present!

Jim tweeted, "A little birdie is telling me that Bradford [Anderson] and Kirsten [Storms] are presenting together at the Emmys."

Also confirmed to present are As The World Turns' Van Hansis (Luke Snyder) and Jake Silbermann (Noah Mayer), as well as Dr. Travis Stork (The Doctors)!

Stay tuned, as Soaps.com will bring you any further details as they are released!

Previously Reported On May 20:

Many have wondered who will be presenting at this yearâ€™s 36th Annual Daytime Emmy Awards show and who the musical guests will be â€“ and Soaps.com has a bit more information to hold you over until the big night!

David Foster, Eric Benet and Dave Koz, who penned a theme song for General Hospital, will come together to play during a tribute for notable past and present soap opera couples.

Though the full list of presenters has yet to be released, you can expect to see â€˜someâ€™ of the Primetime CW series cast members presenting awards, which will include former Days of Our Lives actor Jensen Ackles (ex- Eric Brady), who plays Dean Winchester on â€œSupernatural.â€

Stay tuned, as Soaps.com will bring our readers all of the updates leading up to the show! For those who missed the full list of Emmy Nominations, which were announced last Thursday, please be sure to check them out here!