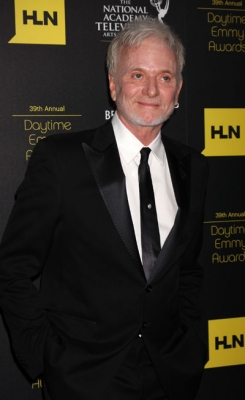 "I love the audience and they have been very good to me."

Anthony Geary has portrayed Luke Spencer on "General Hospital" since 1978. Geary won this yearâ€™s lead actor award at the Daytime Emmys, going up against some pretty tough competition. Backstage, he discussed his thoughts on his win, "It feels good. Really good, sure." He commented on his co-stars, and more to a slew of reporters including Soaps.com's Deanna Barnert.

When asked about his thoughts for getting extra time for his speech, he confessed, "It was little unnerving. I am used to it being at the end of the show with the lights flashing in your eyes to get the hell off, you know, so I havenâ€™t really give it much thought. I was a little unnerved by it. That is never a bad thing." He was happy about Jonathan Jacksonâ€™s (Lucky) win and gushed, "Jonathan is the best actor I have ever had the wonder of working with. He just unzips his heart and bleeds. And, uh, it is very easy with Jonathan to look into his eyes and get into that intense, deep, emotional place." Geary remembers testing with Jonathan in 1993. The actor played the role from 1993 to 1999 and again from 2009 to present time. "I tested with six kids and I knew he was the one. We all did, we all did. When I first worked with him, it was his first job and he asked all the right questions. He was 11 and he said to me one day on our first shoot in Rochester, New York. â€˜Why doesnâ€™t Lucky have a pet?â€™ And I said, â€˜Why do you think?â€™ And he said â€˜Well, could it be that we move too fast?â€™ And I said yeah, maybe they had a dog once who got lost in a move and it is too painful. And he ran with that. So every time Jonathan asked a question it was always about the work, never about celebrity or any of the other stuff."

When asked what Geary was up to after the show, he reported that he was leaving tomorrow to go home. "And will return on the 22nd of July in two weeks. Then I am going back there and then back here. I am back and forth until the end of September." He spoke about losing Robin (Kimberly McCullough) who exited her role recently only to leave a cliffhanger behind that she wasnâ€™t killed in the lab explosion but very much alive and in an undisclosed location. He hopes they get a chance to find out what happened to her. "I would love to get back to deal with that." What about the women he works with? Geary confesses honestly, "I do not prefer any of the women I have worked with over any other. They all bring such different qualities to the party. I love working with all three â€“ Jane [Tracy], Finola [Anna] and Robin Mattson [Heather]. At the moment I am a very lucky man to have three fabulous actresses to play with."

Geary went on to talk to reporters about what he thinks about the audienceâ€¦ Honest as ever he admits, "Well, I never think about the audience. I really donâ€™t. I never have. I always think about how I can fulfill the material. And I actually have been begging Bob and a couple of other producers to let us explore Lukeâ€™s dark side. Because we have never really went there fully and it was always there. And I thought I was always being trivialized by always just being, uh, the humor. And Bob came up with an amazingly dark story and I was thrilled with it and I just figure the audience will either like it or not. I love the audience and they have been very good to me. I am not saying I donâ€™t. But I donâ€™t work for them. I work for the script and for my own sense of ethics of the character. And so far the audience has been okay. They complain. They did not like Luke raping Laura [Genie Francis]. But that is how it started. I learned early on you donâ€™t follow the audience. You ask them to follow you."

Thoughts on Frank Valentini, the "GH" executive producer? "Frank is an amazing producer. He has his hands in everything. He is micromanaging that show like, I mean, it is just amazing. I think we would all say that the look of the show is pretty, pretty spectacular. The mood is that everyone is working really hard. Much harder than doing... I did eleven shows in two days this week and Iâ€™m not the only one working like that. It is very hard work and he likes to keep things moving. There is not a lot of time for laughs. But all that matters is what comes on, onscreen."

Watch the red carpet interviews with Frank Valentini and Jonathan Jackson amongst others on the main page of Soaps.com. Just hit the options gear in the bottom right of the player to view the rest!

Be sure to get your fix by reading the rest of our 39th Daytime Emmy coverage.