Get the scoop on actors that will be coming to your favorite show, those who will be leaving, as well as casting calls and contract talks!

Finola Hughes has once again stepped into playing the dual role of Anna Devane and her twin Alex Marick. Back in the Wednesday September 2 General Hospital episode, Alex called Anna and we were able to hear her chilling greeting and ever since then, Anna has been eager to lure her sister out of hiding and find out once and for all if she or Alex is Peter’s mother. The Halloween promo showed Anna putting on a witch hat, but we suspected it wasn’t Anna at all… And we were right. By week’s end, Alex revealed herself to be in Port Charles, dressed in a black witch costume (Anna was in a white one) and on the hunt to cause some holiday tricks of her own. 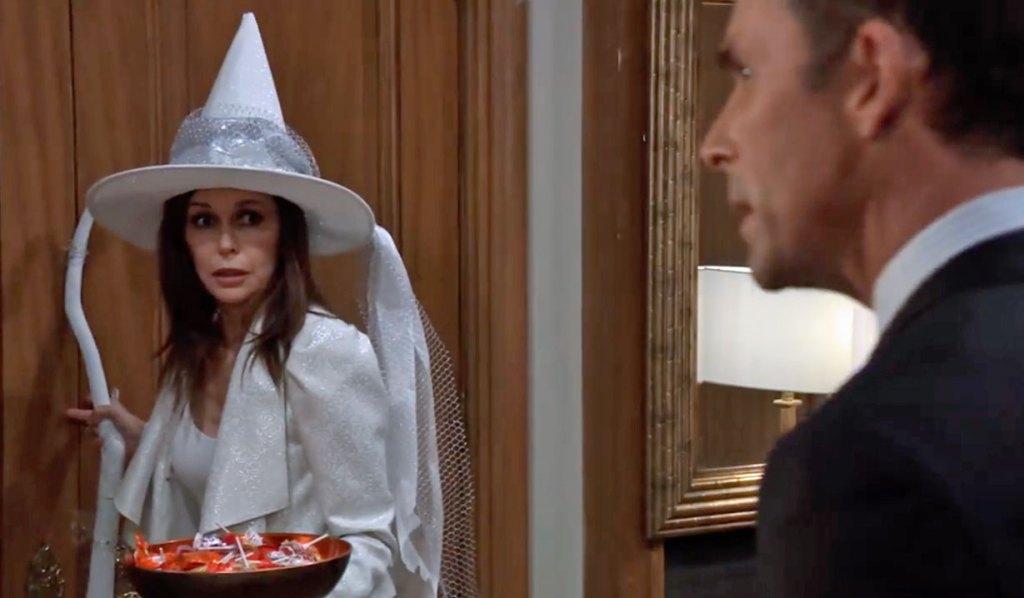 Read what’s coming up next in our exclusive General Hospital November Sweeps, which includes a devastating twist.

On Tuesday November 28, as first reported by Daytime Confidential, rumors started swirling that Emme Rylan was leaving General Hospital as Lulu Spencer Falconeri. Later, the actress posted a photo on Instagram, wrapped in the arms of her partner and their three children with the caption, “Some days are hard and you just need your whole family to give you a hug.”

Last night, October 29, Rylan spoke out on her General Hospital status via video in an Instagram story… (You can read, in just about its entirety, what she had to say here.)

The actress has played the ABC soap role since 2013 and recently her character has found herself stuck between her ex-husband Dante, who she clearly still loves, and Dustin, the man who helped her move on from the past — a past that has resurfaced.

The daytime vet, a member of an elite group of soap-hoppers, is also known for her CBS roles, playing Abby Newman on The Young and the Restless and Lizzie Spaulding on Guiding Light. We will update readers on Rylan’s status when more details are released.

Dane West will be making another return to Young & Restless on Wednesday November 11 and Thursday November 12 as a young Adam Newman, Soap Opera Digest has learned. Back on August 25, we reported that the actor had appeared in the role on Monday August 24 when Adam had a disturbing memory from his past, which was West’s first daytime appearance. What will be haunting Adam this time around, enough so that he’s flashing back to the past? It’s anyone’s guess… stay tuned.

Deborah Geffner has landed a role on The Young and the Restless as attorney Gwendolyn Gardner, as reported by Soap Opera Digest. The character will be working closely with the Abbott Family. Could the case have something to do with Dina’s will? Geffner played Dr. Carlyle on Passions from 2004 to 2005 and has turned up in numerous primetime hits such as Falcon Crest, Grey’s Anatomy, Criminal Minds and How to Get Away With Murder. She will debut on Young & Restless on Thursday November 5. Also, look for Lauren Woodland’s return as Brittany, who could very well play into this storyline. Aand, while you’re here, take a peek at photos of the characters we ranked as Young & Restless’ 25 greatest — ever.

Did someone call for a lawyer? They sure did since Lauren Woodland will be bringing Brittany Hodges Guttierez back to The Young and the Restless once again, first reported by Soap Opera Digest. The character first appeared in 2000 and was last seen in Genoa City over a year ago on October 1, 2019 when Brittney planned to look deeper into Katherine’s will after Cane produced a copy stating he was the beneficiary. Who will be in need of Brittany’s assistance this visit, and could it have to do with another will — Dina’s? Look for her return beginning Friday November 13.

Adam Newman is out for revenge on his family and those who wronged him. Warning, spoiler ahead! Next week on The Young and the Restless, Melissa Claire Egan’s Chelsea finds herself in a jam when she’s abducted from the Chancellor Mansion. Filming the scene must have been a real treat since, as reported by Soap Opera Digest, the kidnapper will be played by the actress’ husband Matt Katrosar, even though we won’t see his face. It totally makes sense, given the current health crisis and the need for social distancing, plus the fact that the CBS soap actors’ real-life spouses have stepped in to film scenes. So, keep a close eye out or you might miss it! And while you’re here, check out a photo gallery of not only Egan and Katrosar but all of Young & Restless’ real-life couples.

Casey Moss will return to Days of Our Lives as JJ Deveraux beginning on Thursday November 5, according to Soap Opera Digest. On August 28, we reported that Moss left the NBC soap on February 18 after suffering the devastating loss of his girlfriend, Haley Chen. He went to Bill Horton’s funeral which was held in Africa, along with his mother Jennifer, his father Jack, and sister Abigail. Everyone returned and he stayed behind to try to make a life there. Fans received their first look at the actor’s return in the Days of Our Lives video fall preview.

A blast from the past is about to hit Genoa City! Daytime Emmy winning actress Tricia Cast will return to The Young and the Restless as Nina Webster, as first reported by Entertainment Weekly. Fans can expect Nina to not only reconnect with her BFF Cricket, but to make sure her son Chance is doing well. The actress first arrived on the CBS soap opera in 1986 and last appeared in August 2014. Look for Nina to first return to town in early November and also to take part in the soap’s 12,000th episode celebration on Monday November 30. For now, look at photos of some Young & Restless characters that we miss and want back — and check out the story we have in mind for not only Nina but also… On second thought, you’ll have to read it to find out!

On Wednesday October 28, CBS’ Big Brother: All-Stars aired its finale, and though houseguest Da’Vonne Rogers didn’t take home the $500,000 prize, she did win America’s Favorite Houseguest, $25,000 — and another guest spot on The Bold and the Beautiful. She took to Twitter to announce her latest daytime guest appearance as Starr and stated, “Currently going over my script for @BandB_CBS!!! Be on the lookout for “STARR” I’m so excited.”

Back in 2016, Rogers appeared on the soap opera as a florist and will be taping scenes very soon for an upcoming episode. Keep an eye out!

Genie Francis has been missed on General Hospital and Port Charles could really use its mayor back with Cyrus still running around controlling half the town. The actress was last seen in the beginning of August when Laura delivered a warning about Renault and his destruction of the hospital — and she’s headed back to make sure the mobster is stopped in his tracks. In our exclusive General Hospital November Sweeps preview, we invite readers to take a deeper look into who Laura will be teaming up with, a devastating twist ahead and the big reveal of a long-kept secret. So, hang on to your hats, fans, it’s going to be a bumpy ride!