Carly tosses the necklace Simon gave her into the water. As Meg prepares to walk down the aisle, Emily tells her the truth about Paul! 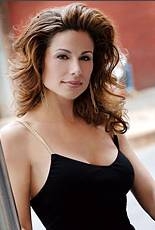 Carly walks in on Simon and Vienna kissing. Vienna apologizes to Carly, plants another kiss on Simon, then leaves. After Vienna leaves, Simon informs Carly that Vienna knows the truth about the necklace. Carly panics, asking Simon to promise her they won't go to jail. He tries comforting her, saying not to worry; Vienna will keep their secret. When she asks why, he says, "Because we're breaking up." Carly refuses to be dumped! He explains that he's not really dumping her.

Simon discloses to Carly that he won't put her or her children in jeopardy! He doesn't want to waste one moment of their time together -- that means more to him than the jewels.

Later, in town, Simon informs Carly that the solution to their problem will be there any minute. Soon after, Maria arrives. Simon introduces Carly, saying that she's the jeweler who made the necklace. After his quick introduction, he lets Maria know Carly loves the necklace and then he asks her to make a copy for Carly's sister. "I'm sorry Simon, I can't do it," the jeweler replies. She expresses her regret, but says she's swamped. Simon tries again. He finally convinces her to make a copy, but she can't promise when she will have the copy.

Adam reports to Casey about Gwen walking out on the demo. He asks Casey to help him get Gwen back. Casey refuses. "How do you expect her to work in the studio after what she saw?" Casey asks Adam. Adam apologizes, trying again to convince him to let Gwen know he's sorry. Casey gives in, saying that he will try.

As Adam gets ready to leave, a man shows up at the door. Casey jumps up and says -- in front of Adam -- "Look, you'll get your money Burns" He motions for Burns to go outside. While outside, Casey finishes, "but not by showing up and asking while I'm trying to study, alright? I'll be in touch." Burns accepts, but advises him to talk to his brother.

Back inside, Adam asks Casey what that was all about. Casey replies that he borrowed ten bucks for a kegger last week. Adam advises he pay him. Casey says he'll pay him later.

Later, when Adam returns with coffee from Java, he asks Casey if he tried to call Gwen. He confirms, but says that she didn't answer. Adam asks him to try again. "Okay, I'll try to call her again if it'll get rid of you," Casey replies in disgust.

While Casey attempts to try to call Gwen again, Adam opens up Casey's laptop then glances at the screen. He looks upset by what he sees! Casey notices, hangs up the phone, rushes over, and quickly closes the laptop telling Adam that it's none of his d** business! "Are you crazy? You don't need that kind of trouble Case," Adam responds.

Guests begin arriving at the Snyder's for the wedding. Jade tells Will he wants to apologize to Gwen. "For what?" he asks. She tells Gwen that she's sorry that she walked in on her and Adam at the studio. Jade realizes Gwen didn't reveal the information to Will, so she apologizes to Will explaining that she thought Gwen would have told him by now.

After Jade leaves, Will confronts Gwen. Gwen apologizes to Will: she should have told him about finding Jade and Adam together in the studio. Will accepts, advising her not to let Jade get in the way of her happiness.

Lily apologizes to Meg for coming down so hard on Paul. Meg accepts by saying Paul really is a good guy. Barbara and Emma enter and Barbara lets Meg know how beautiful she looks. She says that she has something for her and gives her a necklace, which she says she gave to Jennifer on her wedding day. Barbara asks Meg if she'll wear it. Meg hugs Barbara, agreeing to wear the necklace.

While waiting for the wedding to begin, Lily and Faith give Meg a surprise to cover the rest of the traditions. They hand her a blue bouquet, the bouquet Lily used in her wedding. Lily wishes Meg and Paul the best.

When alone, Faith tells Meg that she's "so beautiful," and says that she must have had many boyfriends. Meg reveals that, at her age, she was more of a tomboy. Energized, Emma comes in reminding Meg it's almost time to start!

After Faith and Emma leave the room, Meg asks Lily to be her matron of honor. Without hesitation, Lily agrees.

Later, while sorting through CDs, Faith, looking unhappy, asks Luke if he thinks Aunt Meg and Uncle Paul's marriage will last. He tells her that it will. She says even if it doesn't, that's what divorces are for. Luke tells her not to think that way.

Outside the Snyder's, Paul is surprised to see Emily instead of his mom. Emily informs him that marrying Meg will be the biggest mistake of his life! Paul explains that he loves Meg and tells Emily he meant every word he said to her during their talk. Emily reveals that she could have told about him switching the bullets in the gun, but she didn't because she cares about him. Paul says he knows that she was helping Craig. Emily asks how he can marry Meg if he believes the two of them still have a bond. Paul tells her that he feels a connection to her because he knows that she understands him better than anyone else but they don't have a future. "Why not," she inquires. "Look what happened to us, I don't want that to happen again," Paul sighs. Emily states that she wasn't well then. Paul says it was because of him. She informs him that she's better now. He advises her that she has a long ways to go, admitting he does too. He goes on to say she should be with someone she can count on to make her life better. One of the reasons he loves Meg is because she makes him want to be a better man. She says that she loves the man he is; he doesn't have to prove anything to her, nor does he have to change. His response is that they'll only end up hurting each other and he can't do that. "Meg is my future and I'm marrying her whether you understand that or not." With tears in her eyes, Emily replies, "I understand."

Later, after everyone has taken their place in the living room, Meg picks up her bouquet and takes one last look at herself in the mirror. While admiring herself, Emily walks in! Meg asks Emily how she got up there. Emily says that rich people crack her up; the security left the back door wide open. She asks Emily what she wants. Emily tells Meg she looks beautiful. Meg orders Emily to leave, but Emily refuses! Emily goes on to say that her wedding night was similar and that she and Paul pushed their time up too. Meg informs Emily that Paul warned her she would try to stop them from getting married, but Emily says she's not trying to stop them; she just wants to make sure she has all the facts before she says "I do." Again, Meg orders Emily to leave! Emily doesn't budge! Instead, she reveals that Paul switched the bullets! Meg says she doesn't believe her, and then Emily tells her that she walked in on Paul trying to smother Craig. Shocked by the news, Meg asks her why she's doing this. She says Paul told her they have a bond -- a deep connection -- and it worked until now. Meg orders Emily to leave. This time she listens, but, before going, she makes sure she gives Meg her blessing: if she wants to marry a cold-blooded killer, go ahead!

In the Snyder's living room, everyone is in place and Paul waits nervously for Meg to walk down the aisle. Meg stands, waiting for the wedding march to begin. While she's waiting for her cue, Emily is standing outside watching through the window!

After their meeting with the jeweler, Carly feels it would be better if she gets rid of the evidence. Simon tells her that it's "totally unnatural," but she asks him to trust her. Hesitantly, Simon removes the necklace from her neck. She says that he has the jeweler wrapped around his finger and she'll have the copy made for them in no time.

"You know, Vienna's not going to like this. She was counting on your renewing," Carly says after tossing the necklace into the water.

"Well, that's just too bad isn't it?"
"Hmm so, how long do you think it will be before Vienna calls Jack and tells him that we are in possession of stolen property? Oh, I'd love to see the look on her face when we call her bluff."
"You are a very wicked woman."
"It's part of my charm," Carly laughs.
"It certainly is," Simon says with a kiss.

After Simon and Carly walk away, we see the necklace lying on the ground near the water!

Craig asks Lucy to come live with him and Johnny.

Meg tells Paul not to lie to her on their wedding day.

We see Emily saying to someone, "I wouldn't worry about Meg and Paul getting married anytime soon."

Paul and Meg Change Their Wedding...

The Wedding is Off!

The Flash Will Finally Face Off With [Spoiler] in Season 7, EP Confirms